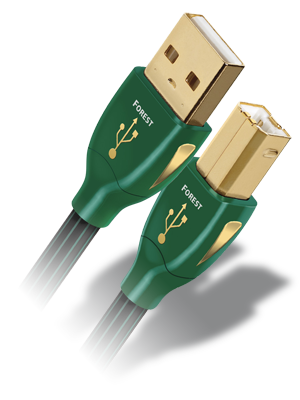 There’s been a lot of controversy about whether different USB cables could possibly make differences in the sound quality of music, as the data sent from the computer are typically buffered and reclocked by the DAC. But the same can be said of digital coaxial and digital AES/EBU connections used between a disc transport and a DAC, and I think that by now most people have accepted that those cables do make audible differences.

I was curious about USB cables transmitting digital signals from computer to DAC before, during, and after my recent review of the Wavelength Audio Proton USB DAC. Thanks to AudioQuest, I had an opportunity to listen to three of their USB cables.

The AudioQuest USB cables reviewed are the Forest ($29/0.75m), the Cinnamon ($59/0.75m), and the Carbon ($119/0.75m). I compared them with each other, and with a generic, made-in-China USB cable with gold-plated connectors that currently costs less than $2 at www.monoprice.com. I swapped out these cables for periods long (weeks) and short (5-15 minutes), to hear whether any audible differences would disappear during swaps.

The entry-level AudioQuest Forest, a black cable with green stripes and green ends, has solid copper conductors and gold-plated connectors. The dielectric (i.e., the insulation) is polyethylene. The Cinnamon looks identical, except that it has red stripes, red ends, and a thin coat of silver plating (1.25%, per AudioQuest) on the solid-copper conductors. The connectors appear to be gold-plated. The Carbon is all black with a woven outer jacket. Its dielectric material isn’t specified, but its conductors have heavier silver plating (5%, per AQ), and the connector surfaces, too, are silver plated. Silver plating on exposed connections may sound like a bad idea -- we’ve all seen tarnished silver. But if the silver is pure enough, it doesn’t tarnish. All three AQ cables have a single solid conductor for each of its signal wires -- the company avoids multistranding because they believe it adds distortions. They use long-grain copper rather than the oxygen-free copper used in many other cables, because they believe the metal’s grain structure is more important.

One thing I’ve learned over the decades is that not everyone listens the same way. While visiting a musician who also used to make limited-production preamplifiers and power amplifiers, I discovered that he listened for the communication among the musicians -- how they responded to what each other was doing -- while I was listening for the differences in tone and harmonics, space, melody, and detail that together make up a sound’s general “quality.” Perhaps this accounts for why some people hear cable differences and others don’t. And I did hear distinct and consistent differences over my six months or so of swapping these USB cables.

Nothing differentiated the four cables’ reproductions of tonality, bass or treble extension, or retrieval of detail. They sounded so similar in all the usual audiophile parameters that I found it impossible to use conventional audiophile terms to describe how a series of reference recordings sounded through them. In those terms -- detail, space, harmonic richness, etc. -- they all sounded essentially the same. There were no differences in the pace of the music, or in how different individual notes or instruments sounded. There was no identifiable difference in high-frequency harshness or smoothness, or detail. No cable produced bass that was deeper or more powerful or more extended than another cable’s. There was no more audible detail in the best cable than in the worst. Each cable was clearly reproducing the same music. But there were differences.

Imagine that you’ve entered a room in which a small jazz combo is performing on acoustic instruments. The room is full of dense fog. You hear everything perfectly, but you can’t really see anything. You know the piano is to your right, about 15’ away, and that behind and to the left of it is a drum kit. You have a fairly good idea of where the other instruments are, but you can’t clearly see any of them. That was the effect of the generic USB cable in my system. 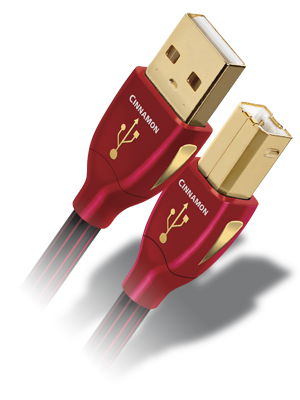 The AudioQuest Forest dissipated enough of the fog for me to see the instruments and musicians, but there was still plenty of fog in the room. The Cinnamon removed more fog, letting me clearly see the musicians and their instruments, though still not with absolute clarity. The Carbon removed the last vestiges of fog: I was able to see and hear everything with perfect clarity.

My struggles to translate into precise audio terms this visual analogy of steadily clearing fog was part of why it took me six months of cable swapping to get a handle on the AudioQuests. Some will blame my predictable conclusions -- the most expensive cable sounded best -- on non-blind testing. However, I did conduct blind tests.

A projection screen in my listening room completely blocks my line of sight to the rack on which my Mac Mini and Wavelength Proton DAC sit. I can’t see if a cable is being changed or not, and covering my ears was enough to block out any noise of cables being swapped. Sometimes, in my blind tests, the cable was not swapped; i.e., the same cable was used for both the A and B stages of an evaluation. It was relatively easy to tell when a cable had not been swapped. It was also easy to tell the difference between the generic USB cable and the AudioQuest Carbon. I was a little less successful at detecting a difference between the Forest and Cinnamon, but I still got it right 80% of the time.

I can’t point to any minor or major differences that were revealed by one recording or another. It didn’t really matter what I listened to: every recording, whether of good or poor sound quality, sounded better in exactly the same ways with certain USB cables. If your experience is like mine, you won’t find that the generic cable sounds obviously bad, but you may be surprised that a cable you spend double or triple digits on sounds better. How much better is difficult to quantify. While the differences between these cables weren’t blow-my-socks-off huge, I found that the $119 Carbon sounded better enough that, for me, it’s a no-brainer to buy it instead of the $59 Cinnamon. If I were running a $1000 system instead of my rig, I might find the Cinnamon perfectly adequate. And if I’d spent, say, a total of $500 on used core components -- an integrated amp and a pair of bookshelf speakers -- I might be perfectly happy with the $29 Forest.

I wish I could find a better way to translate my foggy-room analogy into the audio terminology we’re used to. It was almost like the difference between two audiobook editions of the same novel read aloud by different people: If one reader is boring and the other is interesting, then the interesting one makes the listener’s experience better, even though the words and story are the same. It’s just more fun to experience musical performances in a perfectly clear aural space than in a space filled with some degree of aural fog. Indeed, perhaps the best word to use is clarity. The better USB cables just displayed music with greater degrees of clarity. 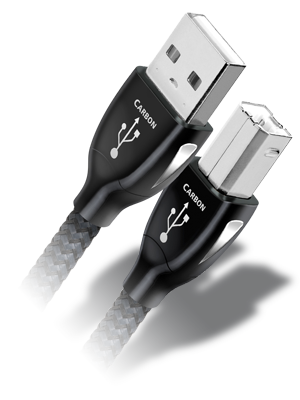 None of these cables, even the “generic” model, sounded bad in any obvious way. But every time I wanted to listen for an hour or three just for the sheer pleasure of it, the AudioQuest Carbon was the one I went to.

I don’t know why better-built USB cables sound better. In fact, before I began my listening for this review, I was convinced that there was no way one USB cable could sound different from another USB cable in this particular application. It took me more than six months to gain enough confidence in what I heard to be able to write this review. I suspect that most audiophiles will hear what I did, but some may listen differently and not notice what I’ve tried to describe here -- or will hear different differences, or perhaps even greater differences.

The differences I heard among the AudioQuest cables weren’t huge, but they made everything I played sound a little bit better -- an improvement definitely worth the cost. If you own 1200 albums, the most expensive of these models, the Carbon, will cost you just 10 cents per album, and every one of those albums will sound better -- and, as far as I’m concerned, a lot more than 10 cents better.