Note: Measurements taken in the anechoic chamber at Canada's National Research Council can be found through this link.

KEF (the initials stand for Kent Engineering & Foundry) was founded in 1961 by ex-BBC engineer Raymond Cooke, who started his company in a building on the grounds of a metalworks in Kent, England. KEF has over 50 years of pioneering inventiveness behind it, bringing to mind other venerable British loudspeaker makers, such as B&W, Quad, Harbeth, and Spendor. It could be argued that KEF reached a new height a few years ago with its Blade speaker, as well as with the exceptionally well-reviewed LS50 stand-mounted model, a modern tribute to the BBC’s classic LS3/5a. 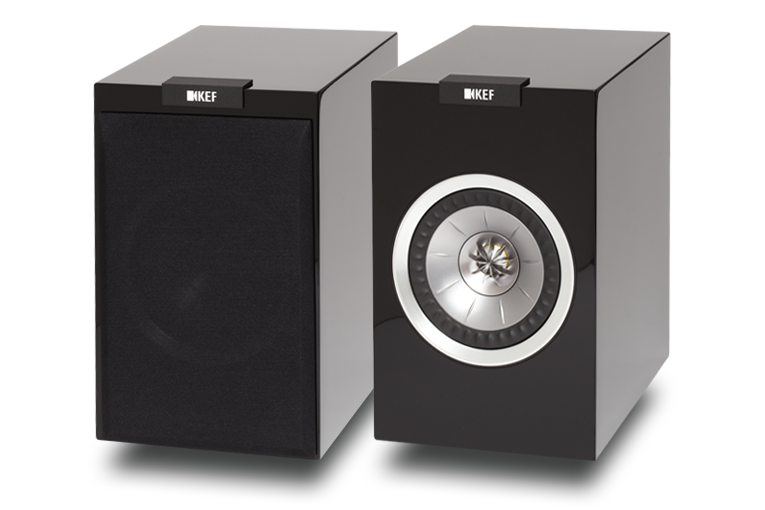 If the Blade sets the standard of quality for cost-no-object speakers, and the LS50 is the result of engineering and design trickled down to a far more affordable level, KEF’s series of R models targets a broader consumer base. The owner’s manual, for instance, offers commentary in 15 languages. The R series is well suited to home theaters: its ten models comprise three floorstanding speakers, two centers, a surround, an Atmos-certified model for height information, a subwoofer -- and two bookshelf models, the smaller of which is the R100 ($1199.99 USD per pair).

The R100 is an 8-ohm, two-way, bass-reflex design with a claimed sensitivity of 86dB. Its single drive-unit is one of KEF’s patented Uni-Q assemblages: a 1” dome tweeter in what KEF calls their “tangerine” (their quotes) waveguide, mounted at the center of a 5.25” midrange-woofer. Both drivers are made of silver-colored aluminum. Around back is a 3”-wide port that’s aligned with the Uni-Q array, and two sets of five-way binding posts -- the R100 can be biwired or biamped. Between the pairs of binding posts, in lieu of conventional jumpers, is a set of knobs that can be tensioned in one way for single wiring, or the other way for biwiring. I did my listening with the R100s connected with single pairs of speaker cables. 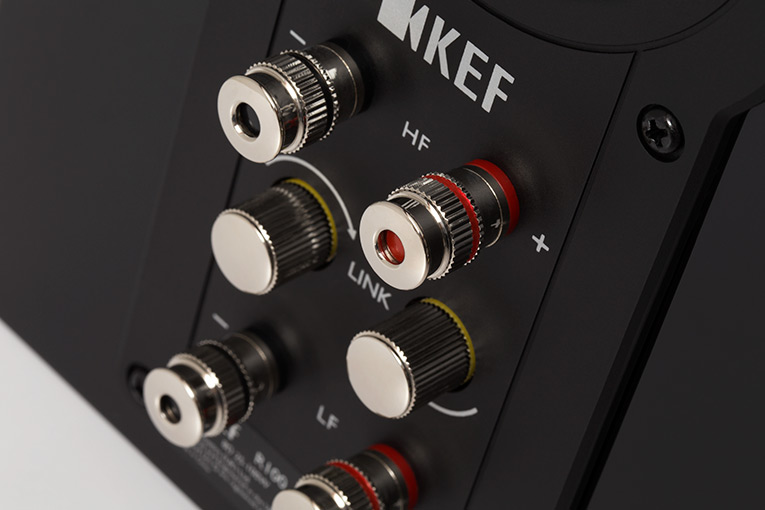 Each R100 measures 11”H x 7.1”W x 11.4”D and weighs 14.5 pounds. Since the Uni-Q driver is recessed into the front baffle and its outer edges are concealed by a metal flange, the cabinet is able to be fashioned to appear as one seamless piece, with no visible screws or bolts to speak of. It’s available in four finishes: Gloss Black or Gloss White, or real-wood veneers of Walnut or Rosewood. KEF provides magnetically attached metal grilles, but I thought the R100s sounded slightly less veiled -- and looked strikingly sleek and handsome -- without them. I did most of my listening without the grilles.

The winter of 2015 wasn’t as hard on Brooklyn as it was on other parts of the country, but it was cold enough, and made for the perfect conditions to use my winter amp: Raysonic’s hot-running SP-300 tube integrated. I connected the KEF R100s to the Raysonic via 9’ of Element Cable Double Run speaker cables, and my primary source component was an Apple iPod Classic (sixth generation, 160GB) loaded with Apple Lossless files and connected with a Monster Cable interlink. I’d received the R100s immediately after reviewing a pair of MartinLogan Motion 35XT stand-mounted monitors, so my listening comparisons were to them, and to the musical ideal I hear in my mind’s ear. The KEFs sat on a pair of 18”-high Target stands, about 2’ from the front wall, 8’ apart, and toed in toward the sweet spot.

My initial impression of the sound of the KEF R100 was that, true to its origins, it was the embodiment of what we expect from a pair of British-designed stand-mounted speakers in 2015: polite, and with a midrange emphasis -- as much as a beautifully balanced speaker can emphasize any part of the audioband; superb integration of highs and lows, thanks to the Uni-Q design, and superb linearity. The KEFs were a little power hungry, demanding as much from the Raysonic’s 80W rating as it could deliver. These characteristics didn’t differ much over the course of my listening.

First up was the Wynton Marsalis Quartet ca. 1986, and their take on Kenny Kirkland’s “Chambers of Tain,” from Live at Blues Alley (16-bit/44.1kHz ALAC, Columbia). Through the Uni-Q driver, Marsalis’s trumpet was sweet and clear without being sharp, and behind him the band was tightly integrated, from Jeff “Tain” Watts’s immense drumming, to the thrum of Robert Leslie Hurst III’s bass, to Marcus Roberts’s pounding, resonating piano structures. With the softer “Autumn Leaves,” the R100s spread a wide soundstage with a good amount of ambient retrieval, establishing a palpable sense of what it must have been like to have been in that club on that night. 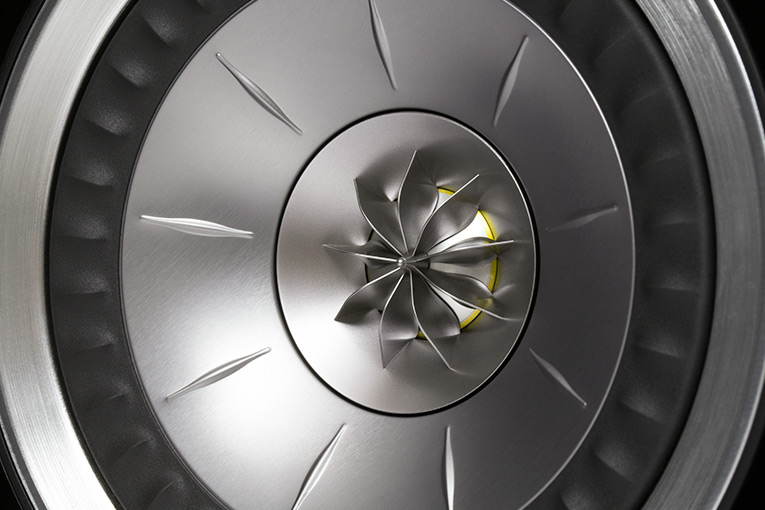 “Born Under a Bad Sign,” from the Jimi Hendrix compilation Blues (16/44.1 ALAC, MCA), begins with Billy Cox’s meaty bass, before being joined by guitar and drums. This is a jammy, relaxed performance, and the R100s conveyed its laconic pace in rich, unhurried detail. An arrestingly coherent midrange held my attention throughout, and at one point, when Hendrix pauses, the audible buzz of his guitar amp gave this track an exceptional sense of presence through the R100s. When that track segued into “How Blue Can You Get?,” from B.B. King’s Live in Cook County Jail (16/44.1 ALAC, MCA), the transition was seamless. The new song pulsed with musical life, providing a transparent view into the event itself. B.B.’s been downhearted, and the sound created by the R100s was filled with heart, his growls grounded in the low end, his guitar strings riding just above the crackle of the drums. 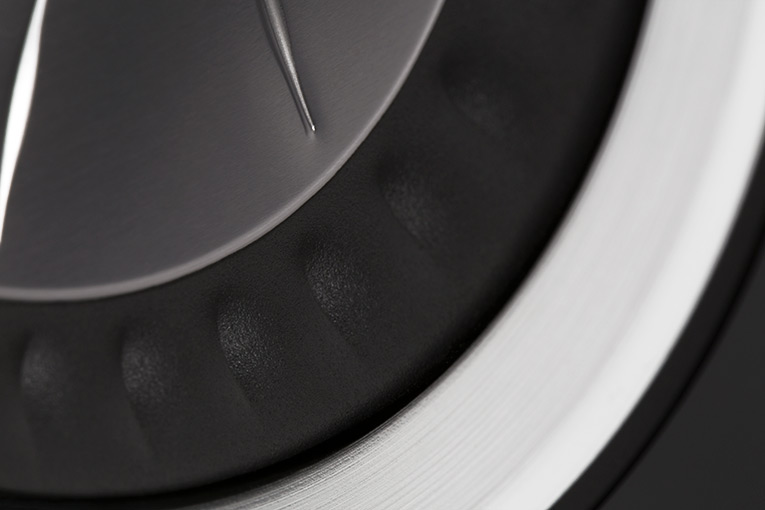 In Tony Bennett and Bill Evans’s cover of “Lonely Girl,” from their duo album Together Again (16/44.1 ALAC, Fantasy), Bennett’s voice was uncolored through the R100s’ midrange, and the distinct aural images of his voice and Evans’s piano were delineated and free of grain. The R100s excelled with recordings of small ensembles and duos in which acoustic instruments and human voices took precedence over hard-rock slam. “The West End,” from John Mellencamp’s No Better Than This (16/44.1 ALAC, Rounder), is influenced heavily by T Bone Burnett’s production style, which tends toward warmth, even claustrophobically so. The sound of the instruments, however, had a natural, flowing quality, a delicacy and ease that produced a healthy tension with Mellencamp’s lyrics. Like Mellencamp’s band, Bob Dylan’s group on his Modern Times (16/44.1 ALAC, Columbia) is acoustically inclined; the R100s reproduced Tony Garnier’s double bass resolutely, with speed and accuracy -- and a top-to-bottom unity of sound and purpose, from guitars to drums.

While the R100s were most comfortable with gentler fare, with something like “Canal Street,” from Raekwon’s Only Built 4 Cuban Linx . . . Pt II (16/44.1 ALAC, EMI), they dug deeply for low-end bump, capturing the natural timbre of the studio production, with solid if not room-shaking bass. In the soulful “Let’s Talk About It,” from Teddy Pendergrass’s You and I (16/44.1 ALAC, Eagle Rock), the bass was taut, the beat consistent and propulsive. The R100s continuously offered reliable low-end sound that was balanced and stable, and did so without stress or strain. 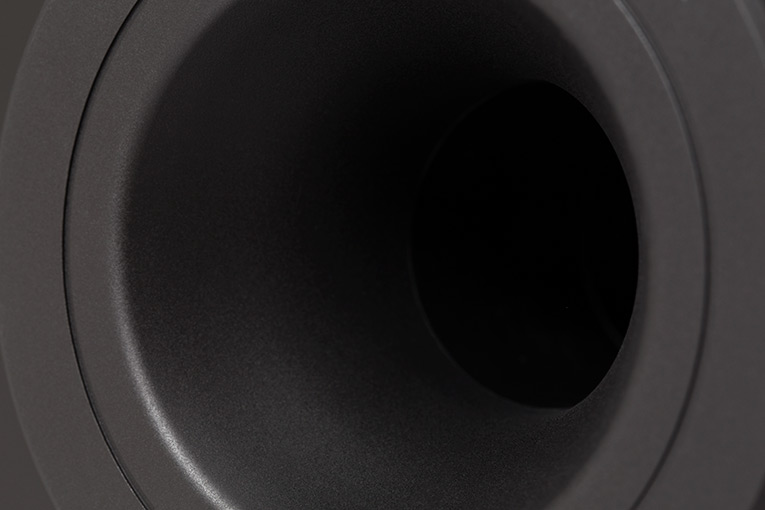 The electric-bass drive of Joe Strummer’s “Arms Aloft” (Streetcore, 16/44.1 ALAC, Hellcat) was beefy and comforting, and had the R100s pushing lots of air out of their ports. The trip-hop rumble of Tricky’s “Overcome” (Maxinquaye, 16/44.1 ALAC, Island) sounded uncompressed and properly scaled paired with Martina Topley-Bird’s whispery, chirping voice and the accents of a distantly ethereal wooden flute. Every time I started to think the R100s were a bit old-fashioned, that its bass was lacking, or its highs tended to be rolled off, they’d remind me that they were thoroughly contemporary, and able to deal with the demands of 21st-century recordings.

Late in my audition of the KEF R100, I acquired NAD’s digital integrated amplifier, the D 3020. Its power output is relatively low at 30Wpc, but it eliminated any woolly or wonky distortion the Raysonic’s tubes might have been responsible for. Powered by the NAD, the R100s slightly tightened their grip on the music’s emotional truth, with a tad more drive and authoritative weight. Offered the cacophony of “Top of the Hill,” from Tom Waits’s Real Gone (16/44.1 ALAC, Anti-), the R100s sorted out the varied sounds with aplomb, weaving together the percussive elements, electronic scratches, raspy vocals, and clicks and pops into a singular whole. Through lesser speakers, this version of Waits-ian madness can cause confusion in the crossovers and anarchy among the armature. Not so the R100s, whose top-notch engineering earned its keep.

By the end of my time with the MartinLogan Motion 35XTs, I was engrossed by their ability to create low-level dynamics, and by the high-end extension of their ribbon tweeters. And their larger (6.5”) midrange-woofers were simply able to move more air than a smaller driver could. Instrumental timbres and colors were vividly intense and grippingly realistic. KEF’s R100s, however, excelled at pinpoint imaging, a scintillating treble, quick bass, and a natural midrange. In “Tragedy by Definition,” from The Best of John Doe: This Far (16/44.1 ALAC, Yep Roc), the strummed acoustic guitars had an understated elegance, and Doe’s voice was superbly stable and smooth. Song after song, the sound through the R100s was utterly unfatiguing, pleasantly soothing, yet supremely detailed.

When I cranked up Prince’s “Chelsea Rodgers” (Planet Earth, 16/44.1 ALAC, NPG), the KEFs’ response to the high-energy jolt was instantaneous when driven by the D 3020. Their attacks speeded up but remained in control, never sounding brittle or etched. Aural images of instruments were constructed in three dimensions, resulting in transparency and tonal and textural finesse. This clarity continued through “Angel Dance,” from Robert Plant’s Band of Joy (16/44.1 ALAC, Rounder). The recording, directed by producer extraordinaire Buddy Miller, maintained the highest level of dimensionality, free from distortion and brimming with purity, harmony, and articulation.

The R100s had impressive power and authority in the bottom end of “Africa,” from D’Angelo’s Voodoo (16/44.1 ALAC, Virgin), though their sound wasn’t quite as engulfing as the ML 35XTs’. On the other hand, the KEFs excelled at calibrated speed of attack and graceful decay. They delivered the singer’s flexible falsetto in three dimensions, the background voices floating in and around him like butterflies navigating a steady breeze. Textural details came through, as if the track were as fresh as on a first listen.

As I listened to the KEF R100s, there was a rightness about how they reproduced music. Everything they did seemed to be based on a philosophy of balance. The bass was punchy but not boosted. The trebles were crystal clear but not accentuated. The focus was on the midrange, as befits a design with the R100’s pedigree. And because KEF has been doing this for a while, I got the reassuring feeling that a lot of time, effort, and expertise had gone into them. KEF has the courage of their convictions.

KEF’s proprietary Uni-Q driver, by its very nature, integrates the outputs of tweeter and woofer as can no pairing of separately mounted drivers. The harmony it produced across the audioband was undeniable. Visually, the driver array is as digital-age as the solid, sturdy cabinet is analog. The combination blends modernity with classicism.

The R100s could handle anything I threw at them. With any given track, I was always anxious to hear exactly how they would handle it, how much composure they could muster. But when fed acoustic rock or small-combo jazz recordings, and fueled by an efficient amplifier with some electrical fortitude, the KEF R100s perform with the confidence and poise of a grand master.