The French post-punk quintet En Attendant Ana (the name means While Awaiting Ana) debuted on record in 2016 with the 19-minute EP Songs from the Cave, an aggressive and somewhat noisy half-dozen songs, all sung in English, in which loud guitars and old-style keyboards are combined with Margaux Bouchaudon’s sensitive, witty vocals. The EP’s DIY sound gave way in 2018 to Lost and Found, the group’s first full-length album. More polished and tuneful, Lost and Found still had an edge, and continued to find places for Camille Fréchou’s trumpet to add unusual and welcome textures.

The memorable guitar riff and Farfisa keyboard of “Do You Understand?” create a driving garage-rock vibe further propelled by a rolling bass line. The arrangements of many songs on Juillet are centered on repeated guitar riffs that grab the ear, while Bouchaudon or Fréchou on rhythm guitar further shape the music. Most of these songs are performed at fast tempi, and Vaugelade and drummer Adrien Pollin are key to keeping them on track. 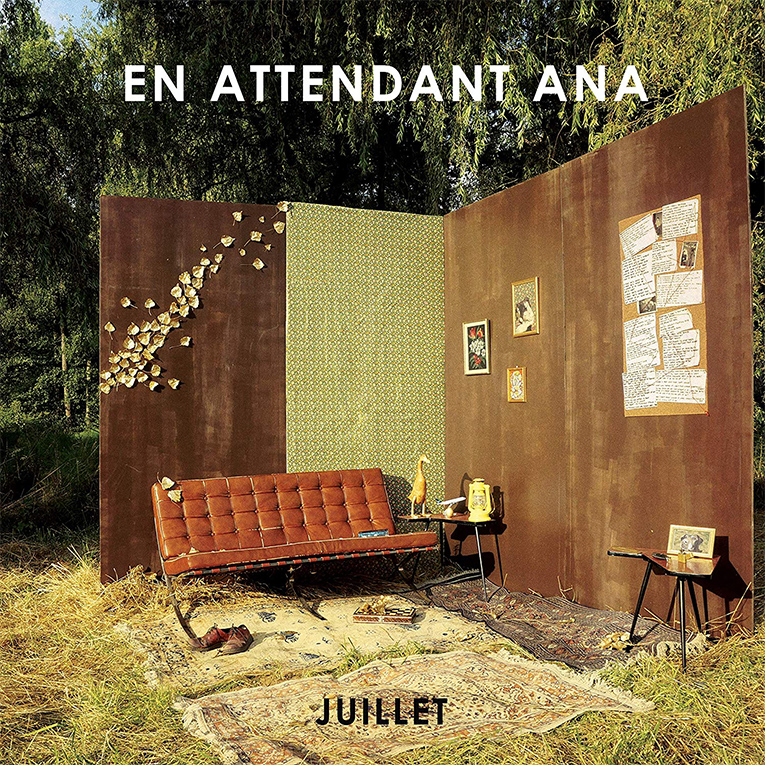 On first listen, I pegged En Attendant Ana as a guitar band, but “From My Bruise to an Island” shows how willing they are to subvert expectations. It begins with a guitar arpeggio, but soon atmospheric keyboards and trumpet predominate, and Bouchaudon’s heavily reverb’d voice gives it a haunting tone even as Pollin’s cymbal splashes and drum rolls pump it full of tension. As I listened I groped for cogent comparisons, but couldn’t find any that did justice to this unusual and exciting song.

En Attendant Ana doesn’t use distorted or overdriven guitars, preferring an aggressive, rhythmic approach reminiscent of the Velvet Underground’s. That doesn’t mean they sound like the Velvets, or like anyone else. While I thought I could hear what might be various influences -- the Cure, Echo & the Bunnymen, 1960s girl groups -- those associations tended to slip away as soon as they occurred to me. Instead, En Attendant Ana reminds me of what I like best about all of my favorite bands: the drive to make real the unusual sounds they hear in their imaginations.

Camille Fréchou’s trumpet playing adds something new and unusual to this kind of rock, but it’s Margaux Bouchaudon’s voice that gives Juillet its unique magic. At once knowing and innocent, her singing is unforced and confident. Vaugelade’s bass playing doesn’t call attention to itself, but always pulls the music together, and Pollin’s drums play a key role in keeping the music moving. Nor does it hurt that the songs themselves are memorable, and that each track has something -- a guitar riff, a keyboard sound, a trumpet line -- that pulls me in.

The sound is not of audiophile quality. Juillet was cut hot, but the instruments come through solidly and are easy to place in the mix. The ample reverb on Bouchaudon’s voice is the right choice for this music. I might have brought the bass and drums up a bit in the mix, but that’s a minor complaint. I’ve been enjoying Juillet for some weeks now, and won’t be surprised if En Attendant Ana’s next album is a perfect masterpiece.