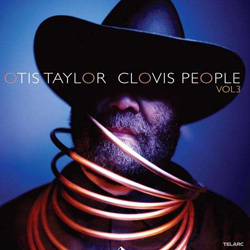 Otis Taylor’s blues incorporates many influences from different styles of music. He’s a formidable player of the guitar, mandolin, banjo, and harmonica, and his mission to introduce people to the African-American heritage of the banjo led him to record Recapturing the Banjo with Alvin Youngblood Hart, Corey Harris, Don Vappie, and Guy Davis. Clovis People, Vol 3 is his 11th release, and it’s an example of how a singer can remain true to the roots of the blues while revitalizing his music with a unique personal vision.

Taylor’s guitar style is based on blues tradition, but it’s his openness to other styles that makes him so interesting. The opening to "Rain So Hard" sounds like a raga, and the song settles into a hypnotic groove that benefits from the familiarity of the blues while using Indian rhythms and tones to create an exotic atmosphere. "Lee and Arnez" has the simplicity of a folk tune, "Harry, Turn the Music Up" rocks hard and steady, and "Babies Don’t Lie" comes close to being a C&W rave up, with Taylor’s banjo picking setting the tone. Taylor calls this music trance blues, and though it may sound repetitive at first, it has tremendous depth and its riches reveal themselves with each listen.

Clovis People, Vol 3 benefits from sympathetic instrumental support throughout the disc. Ron Miles, the Denver-based jazz trumpeter who has appeared on recordings by Ginger Baker, Wayne Horvitz, and Bill Frisell, plays on four tracks, adding feeling and depth to each. Guitarist Gary Moore, who sometimes overplays on his own discs, is restrained and tasteful here, and Chuck Campbell’s pedal steel subtly emphasizes Taylor’s storylines. Small details, such as Fara Tolno’s djembe and Cassie Taylor’s theremin (an early electronic instrument) give the disc sonic complexity. Taylor’s own guitar playing, usually on acoustic or resonator guitar, displays a mastery of various traditional blues fingerstyles and forms the basis of his versatile songwriting.

Taylor is a natural storyteller who chooses the right details to bring his point home. A dying man sings, "I’m hanging on to this bed post and I won’t let go," in "Past Time." A mother tells a drug dealer, "Think I won’t, but I will knock you down where you’re standing," in "Think I Won’t," which is beautifully underscored with a powerful violin solo by Anne Harris. The thread that holds Taylor’s stories together is his voice. He sings with genuine emotion, convincingly adopting the persona of each narrator.

According to the liner notes, Clovis People, Vol 3 was recorded "DSD PURE," and the sound is detailed and clean. It has an organic quality, despite its digital origins, that serves the music well. I’ve heard a few things by Taylor, including his contribution to the compilation Exile on Blues Street (it was among the few tracks I liked), but this is the kind of disc that entices you to check out a musician’s entire discography.