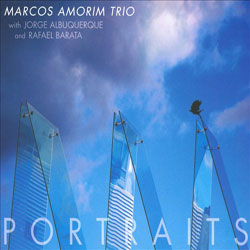 Brazilian guitarist Marcos Amorim grew up in a musical household in Rio de Janeiro, where his father would invite musicians over for jam sessions that often ran into the early hours of the morning. Amorim began formal studies when he was 14 and was playing with some of his country’s leading musicians while he was still in his teens. Portraits is his second outing with bassist Jorge Albuquerque and drummer Rafael Barata and his fourth disc released here in the US through Adventure Records. All three musicians have extensive experience with other Brazilian jazz musicians of note, including Mario Adnet, Ivan Lins, and Nestor Torres.

The three players received equal billing on their previous disc, Revolving Landscapes. Even though they work this time as the Marcos Amorim Trio, Portraits is a collaborative work. Albuquerque wrote three of the ten tunes (Amorim wrote the rest), and Amorim shares solo time generously. Portraits is composed of ten tracks that show a wide command of the group’s Brazilian musical heritage, but American jazz fans will find it exciting and approachable. Amorim plays beautifully melodic, well-developed lines, and his tone is clean and full. He often multi-tracks his guitars, with an acoustic taking the rhythm-guitar parts, which give the tunes their harmonic foundation.

As with Revolving Landscapes, one of the great pleasures of Portraits is that it lets you hear musicians of breathtaking skill working as a unit. Albuquerque’s bass lines are buoyant yet powerful, interacting beautifully with Amorim’s guitar, and his solos are tightly constructed and fully formed. Barata is a remarkably skilled drummer whose cymbal work is deft and subtle. Even with the high level of musical sophistication and skill showcased on the disc, there are no empty displays of technical prowess. The musicians react intuitively to each other and create intricate, joyous music that’s daring in its improvisational flights.

“Bantu” is one of the disc’s high points, with a driving rhythm punctuated with Barata’s intricate playing and Amorim’s ringing chords on a nylon-string guitar. Amorim also solos on acoustic guitar, and the recording conveys the guitar’s resonance with striking clarity. “Leblon” is the kind of Jobim-influenced jazz that Stan Getz made so popular, and Amorim plays with the same delicate beauty that Getz brought to his bossa nova recordings. “Daniel” is as close as Amorim has come to a tribute to Pat Metheny, a guitarist from whom he’s taken some cues.

Portraits is a bit more focused than Revolving Landscapes, and the song sequencing gives it a better pace. Perhaps Amorim’s billing is an indication that he took a stronger leadership role. He obviously cares about the sound of his disc, since he mixed the CD, which resulted from sessions in three Rio de Janeiro studios. Kenneth Lee mastered the album for US release. The sound overall is very good, but I might have pulled Barata up a bit in the mix. Albuquerque’s bass has a lot of presence throughout, and you can easily hear the distinctive tones of Amorim’s guitars. Marcos Amorim should appeal to anyone who likes Brazilian jazz, but if he keeps making discs like Portraits, he has the potential to reach a wider audience.