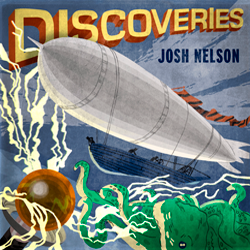 Discoveries is jazz pianist Josh Nelson’s fifth disc as a leader, and he’s played as a sideman on more than 30 other recordings. Now that he’s 32, it’s probably time to stop attaching the word young to him, but it might be premature to start calling him a veteran. Still, he’s very confident on Discoveries,with the compositions and arrangements showing increased originality over his previous recordings. Nelson cites writers Jules Verne and H.G. Wells as influences, along with Speak Like a Child and The Prisoner, Herbie Hancock’s late-1960s recordings for Blue Note.As with all those works, Discoveries evokes the past while anticipating the future.

Nelson’s horn arrangements on Discoveries immediately grab the ear. He uses the flugelhorn, trombone, and bass clarinet to create a warm palate of tones, especially on the title track and "Sinking Ship." Nelson makes the right choices throughout the disc, such as harmonizing his piano and Larry Koonse’s guitar for the bright melody on "Atma-Krandana." He often uses the horns to flesh out his ideas with sustained washes of chords, and touches like Vanessa Robaire’s wordless vocals on a couple of the tracks help keep the disc light without making it insubstantial. Nelson shares solo time generously with the other musicians, who acquit themselves well.

"Tesla Coil" is Nelson’s solo spot, and he plays fleet lines that create an atmosphere of hard work and invention, appropriate to the great Eastern European inventor. Throughout the disc, Nelson demonstrates great command of the keyboard, but he’s written pieces that also let him roam free emotionally. The arrangements feel spacious, yet they have subtle details that demand attention. While Nelson mentions the Hancock LPs as an inspiration, I hear some of Woody Shaw’s late-'80s recordings in the buoyant horn arrangements.

The recording captures the instruments well, especially the drums of Dan Schnelle, but overall it’s a little dry. A touch of reverb would have created more space. Even so, Discoveries is an important and enjoyable step forward for Josh Nelson.