Paul Motian: "The Windmills of Your Mind" 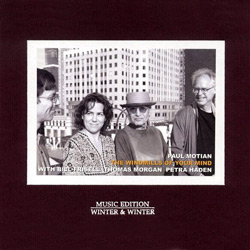 "The Windmills of Your Mind," a tune by Michel Legrand with lyrics by Alan and Marilyn Bergman, first appeared in the 1968 film The Thomas Crown Affair, where Noel Harrison sang it. Somehow Paul Motian, with the aid of Bill Frisell on guitar, Thomas Morgan on bass, and Petra Haden on vocals, has found something mysterious and even magical in a song I’ve always found stodgy. It’s the title track on the drummer’s newest addition to his extensive discography as a leader, and it shows him, even at 80, challenging himself.

Motian has played with Frisell many times since 1982, when Pat Metheny recommended the guitarist for a session he couldn’t make. The intuitive connection between the two musicians is the key to The Windmills of Your Mind. Five of the tunes are by Motian, but the rest are so familiar they’re almost clichés. Frisell and Motian tend to take things at a slow, deliberate pace, as on "Tennessee Waltz." Often Motian’s role is less one of emphasizing the rhythm -- that job falls to Morgan -- than of adding color and texture to Frisell’s melody lines and chord washes. Morgan holds the foundation down, and he keeps things well centered for Haden, who negotiates the songs almost effortlessly.

This group takes old chestnuts, such as "It’s Been a Long, Long Time" and "If I Could Be with You" and makes them sound cutting edge. Haden is probably best known for her association with the Decemberists and her multitracked, a cappella recording of The Who Sell Out.Her delicate voice is exactly right for the shimmering arrangements -- a more seasoned, technical singer might have overwhelmed them. The excellent analog, live-to-two-channel recording captures the openness and spontaneity of the music.