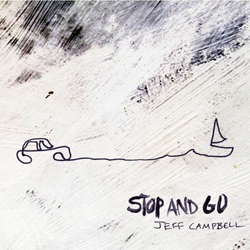 One of the first things I noticed about Jeff Campbell’s Stop and Go is that the acoustic guitars sound like acoustic guitars. My guess is that Charlie Wilson, the engineer at Sonic Zen Studios, recorded them by placing a microphone near the sound hole. Electric acoustic guitars or acoustics with a pickup recorded through an amp sound less open and, well, woody.Wilson has an ear for how an instrument should sound, and it’s that kind of detail that gives me confidence in a recording.

Wilson co-produced the disc, and he and Campbell keep things simple and direct. The instrumentation is spare, usually two or three instruments, with Campbell’s very good guitar work and soulful tenor at the center. The songs are likable folk rock and country pop, in contrast to the rock tunes Campbell writes for Pine and Battery, the San Francisco band he fronts. He resorts to a predictable line here and there ("I’m 4th Street and you’re 5th Avenue"), but he saves his songs with unexpected chord changes and his impassioned singing.

"Southern" features Campbell, multitracked on guitar, with just a touch of harmony vocal from Kyle Caprista and Larissa Waters. Campbell’s vocal could easily overwhelm the song, but he sings with emotion without pushing too hard. "Shut Your Mouth" opens the disc with a clean, ringing acoustic guitar; a focused, energetic vocal from Campbell; and a beautiful supporting guitar by Max Delaney, who adds a brief, effective solo. Wilson’s standup bass pulls the song together, and he also plays a few instruments on a cover of the Cars hit "Drive," which features the most complex arrangement on Stop and Go.

Campbell has a good ear for a hook, but he doesn’t just pander to popular taste. His songs are strong enough to stand on their own with the straightforward arrangements he’s given them on Stop and Go,but I wouldn’t be surprised if he fleshes them out with Pine and Battery. A little maturity will, I think, add some depth to his writing, but he’s solidly on his way.