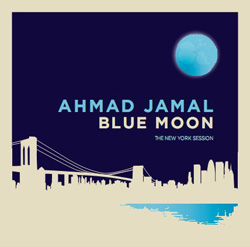 I lost count of the number of albums listed in the discography on Ahmad Jamal’s website, but his newest, Blue Moon: The New York Session, brings his recordings as leader to over 50. Jamal will be 82 in July, and he’s still bursting with ideas. Early in his career he was unfairly accused of commercialism, a charge that Miles Davis, for one, dismissed out of hand. Jamal’s use of space and economy of notes was a strong influence on Davis, who encouraged Red Garland, the pianist in his 1950s quintet, to play like Jamal.

There’s nothing commercial or conservative about Jamal’s playing on Blue Moon. His energy and sense of adventure seem to grow as he ages, and his technical command of the piano shows no sign of slowing down. Jamal mixes things up a little this time by replacing his usual drummer and bassist, Idris Muhammad and James Cammack, with Herlin Riley, who sat in the drum seat for several of Jamal’s ’80s recordings, and Reginald Veal, whose résumé includes stints with Wynton Marsalis. The group expands to a quartet with percussionist Manolo Badrena, who has appeared on five previous Ahmad Jamal recordings.

Jamal is rhythmically subversive coming out of the gate, taking apart Riley’s rock’n’roll backbeat in “Autumn Rain” with bold, ringing chords, then gently stating the song’s main theme. He maintains a great balance of tension and release by dancing around and over the beat, which, after a few bars, is reinforced by Badrena on congas. Jamal plays variations on the melody, pulling apart and reassembling it, then coming at it from a slightly different rhythmic angle as Riley opens things up with subtle cymbal work and less emphasis on the kick drum.

“Autumn Rain” is one of three Jamal tunes here; five of the remaining six are from films or Broadway shows. Badrena is prominent in “Blue Moon,” during which Jamal reinvigorates and reinvents the old standard with great, expansive excursions on the melody over Badrena’s Latin percussion. Badrena also sets a Latin tone for Bronislau Kaper’s “Invitation,” from George Cukor’s 1950 film A Life of Her Own. Jamal plays long, gorgeous lines of melody, but also takes cues from Badrena and Riley to take rhythmic flights. Veal contributes soft, bowed lines to Jamal’s impressionistic “I Remember Italy,” a delicate piece that demonstrates Jamal’s command of the keyboard and his ability to evoke place and emotion.

Jamal’s playing on Blue Moon is by turns dramatic, thoughtful, and intellectually challenging. He approaches each tune as a big-band arranger would, giving it drama and shape. While he often takes exciting liberties with rhythm and harmony, he always anchors his ideas in the song. Jamal loves melody, and keeps it at the center of even his more daring experiments.

Blue Moon is the first release on Harmonia Mundi’s new label, Jazz Village, so it shouldn’t be surprising that itsounds great. Jamal’s piano rings out clearly and fully, and both Riley and Badrena are sharply focused in the soundstage. I would have preferred more definition for Veal, but the presence of his bass is vital to the feel of this session, and the recording registers it strongly.

Listening to Jamal on Dizzy Gillespie’s “Woody ’N You,” which closes Blue Moon, I wondered how many times he’s played the tune. He first recorded it in 1958, and has returned to it several times since then. The fact that he can still find new things in it is a testament to the rejuvenation that art can give us. That’s the reassurance carried by every track on Blue Moon.