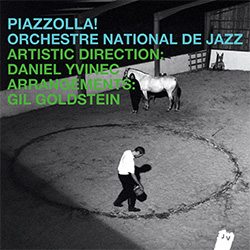 Argentine composer and bandoneón master Ástor Piazzolla introduced jazz and classical influences into the traditional tango and gained international fame, as well as the respect of other musicians. His appeal and ambitions crossed genres, and as a result he wrote for symphony orchestras as well as smaller groups. His music has been interpreted by musicians as disparate as Yo-Yo Ma and Gerry Mulligan, not to mention scores of Latin-American artists, and his extensive discography includes over 70 recordings and nearly 40 film soundtracks. Piazzolla claimed that Tango: Zero Hour, his 1986 recording with his Quinteto Tango Nuevo, was one of his best, and he was right. It’s probably his most popular disc in the US, and is as close to essential as music gets.

France’s ten-piece Orchestre National de Jazz has in the past taken on the work of several unique composers, including Robert Wyatt and John Hollenbeck. Piazzolla! celebrates another maverick, and captures the composer’s free spirit and openness to influence and genre. American arranger Gil Goldstein brings to the music his own eclectic background, which includes work with Michael Brecker, Miles Davis, and Milton Nascimento. One prominent influence is Gil Evans, with whom Goldstein played in the 1980s. Goldstein absorbed Evans’s use of low-register instruments to enrich his sound, as well as his interest in newer instruments, such as effects-driven electric guitar and Fender Rhodes.

A medley, “Chiquilin de Bachin/Balada Para un Loco,” begins with what sounds at first like a rock bass line, but as the arrangement builds it’s the bass guitar that keeps the tango beat steadily running through the first song as the orchestra develops the intensity of the melody. The segue into “Balada” begins with a solo flute, but as the music continues, lines gently played on bass clarinet and electric guitar briefly evoke John Barry’s theme for the James Bond films. The rest of the orchestra enters and begins to add layers of complexity and surprise, evoking the drama and emotionalism of Piazzolla’s best work.

“Libertango,” probably Piazzolla’s best-known work, has been recorded by 500 other artists, among them Grace Jones. A sampling online reveals how exciting and adaptable the tune is, but Goldstein slows it down to a pace at which he and his ten musicians can take it apart and examine it. Vincent Lafont states the melody on Fender Rhodes, then saxophones and flute circle him before Rémi Dumoulin solos on tenor sax. Lafont takes flight on the Fender Rhodes, evoking ’70s-era Brian Auger, as the group continues to build on and reinforce Piazzolla’s themes.

If you know “Tres Minutos con la Realidad” from its several recordings by Piazzolla, or in Yo-Yo Ma’s version, Goldstein’s approach may shock you. It sounds as it might have had Miles Davis decided to adapt it for a track on In a Silent Way. Goldstein arranges “Mi Refugio” for reeds and trombone without rhythm section, and the interactions of these instruments’ rich sonorities are remarkable. “Adiós Nonino,” Piazzolla’s tribute to his father, takes off in several directions, including a modal jazz section featuring Dumoulin, then a distorted electric guitar feature by Pierre Perchaud that recalls Frank Zappa. The longest track, a medley of “Soledad” and “Vuelvo al Sur,” builds in intensity and complexity, delicate at some moments, strongly declarative at others.

The strains of a number of musicians flow through Piazzolla! -- Zappa, Mingus, Barry, Coltrane -- but Goldstein retains a distinctive voice, using such references to highlight how far-reaching Piazzolla was, in both his own interests in music and his impact on other players. This astonishing disc constantly surprises and challenges. The recording is open and detailed, with more small elements surfacing with each hearing, even in the music’s busiest passages. Piazzolla! is a signal achievement for Goldstein, and an inspiration to search out other recordings by the Orchestre National de Jazz.