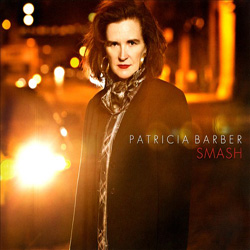 It took me a while to warm up to Patricia Barber, but Café Blue and Nightclub won me over, especially in their recent vinyl incarnations. As much as I’ve come to enjoy her work, though, I wouldn’t have described it as emotionally engaging until now. Smash, her 11th release and her first for Concord, takes as its themes love and loss, and as a consequence Barber leaves behind the sense of ironic distance she sometimes conveys in her earlier recordings. She also casts her stylistic net wider, including elements of rock music in ways that enrich her songs rather than create a feeling that she’s selling out.

When Barber’s sustained piano chords, echoed slightly by a chorused electric guitar, joined the hi-hat-and-bass opening of “Code Cool,” I was reminded of Joe Jackson’s use of sophisticated harmonies within a rock-music structure. “Split seconds can carry quiet surprise,” she sings, but the surprise in this track is in the pauses along the way, which Barber and her band fill with dark, atmospheric sounds. The song itself conveys how we look for hope in the detritus of a failed love affair, and Barber’s balance of dark imagery and small glimpses of light is truly poetic, as is the simple affirmation that closes the song: “I will live as if I were loving.”

“The Wind Song” is less strikingly different from Barber’s usual fare, but it’s a prime example of her songwriting skills -- the shifts from the brooding verses to the slightly bossa nova choruses happen so effortlessly you hardly notice the change. Barber is able to fill with meaning fairly common lines like “You slip like sand away from me” (from “Romanesque”) but more often her lyrics are free of clichés and have the unforced poetic craftsmanship of the great songwriters. I thought of Carl Sigman when I heard these lines from “The Wind Song”:

“Smash” is based on a simple, shifting, minor-chord progression, and builds calmly until close to the two-minute mark, when guitarist John Kregor tears into a loud, brutal, and astonishing rock solo. “Devil’s Food” marries jazz and funk in the manner of Steely Dan, with Kregor again taking a fine turn. “Scream,” a delicate piano ballad that coolly builds into another complex rocker, is another song that defies categorization.

Barber is aided mightily by Kregor, as well as by bassist Larry Kohut and drummer Jon Deitemyer. But it’s Barber’s album, driven by her complex and unexpected harmonic ideas and her expressive singing. Her lyrics are smart without ever seeming too clever, emotional but never cloying. She pushes into new territory on Smash, but “Redshift” demonstrates, again, her ease with bossa nova, and the ballads, including “Spring Song” and “Missing,” help pace the disc.

Jim Anderson, whose work on Barber’s earlier recordings has made them audiophile favorites, is on hand again for Smash, as associate producer and engineer (he also did the mixes). That it sounds great is the only thing predictable about this surprising and challenging disc.