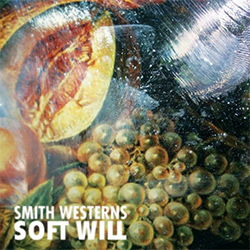 The first time I heard the Smith Westerns, the DJ called them “Beatles-esque,” a term they probably hear a lot. It’s true that “3AM Spiritual,” which opens the Chicago band’s new album, has some late-Beatles flourishes, but nothing else on Soft Will is so overt an homage. The album contains hints of so many groups that it’s tempting to drag in one or half a dozen names in an attempt to nail down this band’s sound. But like Big Star, another group writers evoke to try to describe them, the Smith Westerns have a clear affection for pop craftsmanship, they borrow freely, and they create something wholly their own.

Smith Westerns, from 2009, was a tough pop record that showed some familiarity with Nuggets,Lenny Kaye’s 1972 garage-rock compilation. Dye It Blonde (2011) was more refined, but both albums are filled with catchy melodies and a close attention to detail in the arrangements. Soft Will is even more confident and more consistent than its predecessor, which included a couple of dull tracks. The new album is seamless, and each track is a model of great songwriting that came to life in the studio, thanks in part to producer Chris Coady (Yeah Yeah Yeahs, TV on the Radio).

Max Kakacek’s multitracked guitar solo in “3AM Spiritual” certainly invites memories of George Harrison, but Cullen Omori’s vocal doesn’t sound like Lennon or McCartney, and the synths have an expansive modern ring that, at the same time, evokes the nostalgic richness of a Mellotron. The throbbing guitars of “Idol” had me racking my brain for days for a possible influence -- the tumblers finally clicked on Big Country’s first LP. “Idol” doesn’t actually sound like Big Country, but it wouldn’t surprise me to learn that, years ago, someone in Smith Westerns heard The Crossing (1983) and appropriated the guitar sound.

In the same manner, the instrumental “XXIII” contains hints of early Pink Floyd and King Crimson without directly copping from either. But Smith Westerns don’t just function here as a kind of pop collective unconscious. They seem to have absorbed ideas from every great pop record made since the late 1960s, polished them up, and combined them with their own ideas to make them new.

What keeps Smith Westerns from being merely derivative is songwriting that doesn’t quit. The melodies keep coming back when I’m driving or doing something routine, and they’re full of great surprises. The major seventh in “Glossed” comes out of nowhere but seems inevitably right. Synth and piano lines throughout the album crisscross with guitar arpeggios, and the complexity of the sound deepens, opening up more layers with every listen. Under it all, Cameron Omori’s bass lines, buoyant and snappy, carry the songs happily along.

Throughout Soft Will is an undercurrent of longing, perhaps from wondering what’s coming next in life for a group of guys who’ve only just reached the age when they can drink in the bars they’ve been playing. Many of their words are buried in the baroque richness of the recording -- I checked websites for clues, and some transcriptions of the lyrics were clearly guesses. That’s fine. Soft Will is about the accumulation of detail and letting the music wash over you. Incidental touches, such as lightly strummed acoustic guitars, bubble up to the surface, along with tiny keyboard lines and sound effects.

But I wish that Joe La Porta, who mastered Soft Will, had given the music more breathing room. The disc is loud -- pulling the volume back helps open up the sound a bit, but some of the Mellotron washes push other instruments too far back, and Omori’s bass lines are sometimes too prominent. Despite that, Soft Will is a great rock’n’roll record. I’ve played it happily every day for the last two weeks, and each time I reach the end, I want only to hear it again.