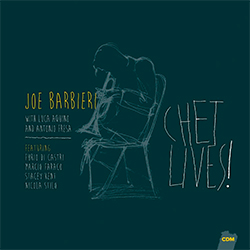 Chet Baker has long been held in high regard in Europe, where he spent much of the last ten years of his life and where, in 1978, he died. The release of Chet Lives!, by the Italian jazz singer and guitarist Joe Barbieri, marks the 25th anniversary of Baker’s death, in Amsterdam. Interest in the great trumpeter and singer seems to be at a peak -- just a few months ago I wrote about Eliane Elias’s highly enjoyable I Thought About You: A Tribute to Chet Baker, which captured Baker’s spirit and celebrated his influence.

Barbieri’s voice has some of Baker’s wounded charm, and for these nine tracks he’s chosen wisely from among the tunes Baker recorded over the years, including “Almost Blue,” which Elvis Costello wrote in tribute to Baker. Barbieri’s accompanists are Luca Aquino on trumpet and flugelhorn and Antonio Fresa on piano, with a few guests helping out here and there. The spare, intimate arrangements highlight the musicians’ talents, and especially underline Barbieri’s emotional investment in these songs. He shows a clear affection for Baker’s influence, but in contrast to his predecessor’s romantic cool, Barbieri brings conviction and passion.

Rather than simply repeat Baker’s versions, Barbieri, Fresa, and Aquino have brought a lot of good ideas to their arrangements. When Brazilian musician Márcio Faraco joins them for a bossa nova arrangement of “But Not for Me,” his singing of the Gershwin classic in Portuguese increases the charm level of a track already rendered beguiling by Barbieri’s accented English. Barbieri himself is not a forceful singer, but his occasional straining for a high note only adds to the emotional power of his performances.

Aquino opens “I Fall in Love Too Easily” with a clear, sustained statement of the melody, accompanied by Fresa’s rich chording. Barbieri’s heartfelt singing leads into a restrained but well-developed solo from the pianist. British singer Stacey Kent sings a verse before duetting with Barbieri to bring the song to a close. Nicola Stilo’s fingerpicking in “Almost Blue” is the perfect complement to Barbieri’s delicate reading of the lyrics -- it’s in this song that he sounds most like Baker. One of the most enjoyable tracks is Cole Porter’s “Every Time We Say Goodbye,” to which Barbieri and his duo have given a Burt Bacharach spin, to very witty effect.

The pace of Chet Lives! is so unrushed that it took a few plays for its charm to grow on me, but its recording quality caught my attention right away. Andrea “Jean-Michel” Cutillo engineered it at Mad Studios, in Naples, where Enzo Foniciello mixed and mastered it. The sound is deep, open, wide, and detailed. The harmonies and complex overtones of the piano are very clearly rendered, Barbieri’s voice is breathtakingly close, and you can hear the rush of Aquino’s breath through his trumpet. It’s like sitting in on a living-room concert -- which is how it feels to listen to Chet Lives! , a disc charming for its modesty, and for its creators’ deep affection for their subject.