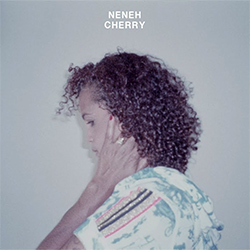 Even Neneh Cherry’s fans might be surprised by the unusual sound of her new disc, Blank Project, although anyone who’s followed her career, with its many experimental turns, may not be too shocked by how avant-garde she is here. As versatile and surprising as her own work has been, her other musical projects have often strayed even further from the mainstream. Her trip-hop group cirKus, which she formed in 2006, included elements of electronica, but with Blank Project she moves fully into that genre.

The London duo RocketNumberNine accompanies Cherry here, and producer Kieran Hebden also engineered and mixed. The backing is spare, often just a keyboard line and drums, with Cherry’s voice carrying the songs’ weight. “Across the Water” is just a basic drumbeat over which Cherry recites a few lines before singing the melody that brings the song into focus. She’s openly emotional about the death of her mother, in 2009 (“Since our mother’s gone, it always seems to rain”), and her own responsibilities as a parent (“My fear is for my daughters / But good God will show them me”).

The distorted keyboards in the title track underline the mixed emotions expressed in the lyrics: “I got a man, I love him so much / Sometimes, I hate him just can’t let go.” Processed drums and multiple keyboards dart around Cherry in “Naked,” but the humanity of her voice reaches out to give the tune life and form. On this album, RocketNumberNine often creates ominous, swirling undercurrents that give Cherry’s lyrics a powerful backdrop. It’s her openness and her firm control of the melodies, however, that inspire such compelling accompaniment, turning what could be novelty into something truly bracing.

Kieran Hebden lets you hear every texture of the keyboards and drums, and he’s probably added some postproduction effects to help emphasize Cherry’s lyrics. I’d be hard-pressed to call this an audiophile recording, but I noticed a significant change in the sense of scale and the amount of detail when I listened to it through my reference system, in contrast to the computer speakers and car stereo that I first play review CDs on.

Although Blank Project isn’t an easy recording to listen to the first time through, I found it powerful enough to want to hear it again. Some of what are now my favorite records -- Captain Beefheart’s Trout Mask Replica or John Coltrane’s A Love Supreme, for instance -- puzzled me the first time I heard them, and, after several plays, this one, too, cohered. Anyone familiar with Scott Walker’s work should have no problem understanding what Cherry and Hebden are trying to achieve with this mixture of sound and music. And anyone entering middle age -- Neneh Cherry turned 50 this year -- will cling to Blank Project’s message about the struggles and occasional triumphs of that time of life.