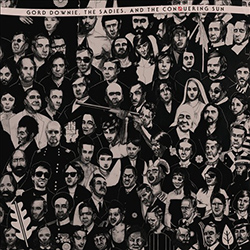 When I read the title of Gord Downie, the Sadies, and the Conquering Sun, I thought maybe Downie had decided to collaborate with two bands -- but it’s just him and the Sadies here, perhaps joining forces with the sun. Wordplay and, on occasion, misdirection are not unusual for Downie, whose lyrics, both in his solo projects and in his work with the Tragically Hip, are unusually allusive and literate. The lyrics on this album are as smart as any Downie has written, and the music has as much electricity as the Hip’s best records do.

It’s easy to hear why Downie wanted to do something with the Sadies when you hear that band’s rush of punk energy in “Crater,” to which Downie responds with passionate singing. The guitars are bright and cutting, and drummer Mike Belitsky has a less aggressive style than the Hip’s Johnny Fay, so it’s easy to set aside comparisons with Downie’s popular Canadian band. “The Conquering Sun” features swirling, chiming guitars that surround and buoy Downie’s voice, and the slight amount of delay on Dallas Good’s shimmering, agile guitar lines gives the song a light, airy feel.

“Devil Enough” benefits from the Sadies’ ease with alt-country, with Travis Good’s mandolin coaxing a gentle vocal from Downie as band, song, and singer effortlessly shift to rock and back. The Sadies show as much versatility as the Tragically Hip, whose own recent efforts at folk-rock and alt-country have been underestimated. Still, the Sadies don’t just stand in for Downie’s band. Their sensibility in “One Good Fast Job” is closer to a garage band’s than the Hip’s might have been, and their country-rock vibe in “Los Angeles Times” is a little lighter.

The Sadies are a great rock’n’roll band, as strong in their own way as the Tragically Hip, which this American holds in very high regard. But this album reinforces Gord Downie’s distinctive voice and persona. The Sadies hold their own, but the overall impact is different from that of their recent album, Internal Sounds. Gord Downie is a formidable singer who can transform a band’s sound. For all his erudition (he dedicates three songs to fiction writers) and the poetic imagery of his words, it’s the unique force of his voice that commands attention. The Sadies play an important role here as accompanists and co-songwriters, but this is very much Downie’s disc.

Bob Rock mixed Gord Downie, the Sadies, and the Conquering Sun, and it was mastered by Ted Jensen at Sterling Sound. The rock tunes are compressed and busy, and even the lighter tracks could have used more space. The quality of the songs and the power of the performances will pull you through, but next time around, Downie and the Sadies could aim for better sound.