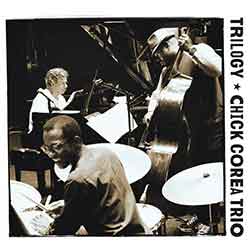 One of the benefits of being an established musician is that early retirement can’t be forced on you. As long as people still fill concert halls or buy recordings, musicians can keep going. Some players continue to do vital work even late in their careers. Ahmad Jamal is making recordings that are as exciting and challenging as ever. Chick Corea, at 73, is a youngster compared to the 84-year-old Jamal, but at an age when most of us will be thinking about moving to Florida, he’s doing some of his best work.

Corea sold a lot of records in the 1970s with Return to Forever, the jazz-fusion group he led. He’s continued to play fusion, most recently with his newly formed band, the Vigil, but to me his most exciting recent work has been his traditional jazz releases, especially Further Explorations, his live trio recording with Eddie Gomez and the late Paul Motian. Trilogy, another live album, is the work of another trio he formed, this time with bassist Christian McBride and drummer Brian Blade, and it comprises three discs and 17 tracks. The trio plays Corea’s compositions as well as standards by other writers, and offers a few surprises.

Disc 1 kicks off with an old chestnut, “You’re My Everything,” which in 12 minutes shows what an impressive ensemble this is. Corea drops a few nods in the direction of other players, especially Bill Evans and Red Garland, but it’s his own flow of ideas that is gripping. McBride’s solo is joyous, Corea occasionally darting around him and prodding him along, and Blade’s feature is witty and dynamic. Joe Henderson’s Latin-tinged “Recorda Me” inspires long, expansive lines from Corea that are quick but never showy. Corea’s own “Fingerprints” gives Blade an impressive workout, and he responds to and feeds the other two players with an exquisite touch.

Corea generously shares the spotlight with the others, and they don’t disappoint. In the wrong hands, bass solos can meander, but McBride is fluid and exacting. Blade reminds me of Shelly Manne, a solidly rhythmic drummer with a melodic touch. Corea’s “Piano Sonata: The Moon,” on disc 3, runs to nearly 30 minutes. Its changes of time and mood would challenge any other trio, but the skill with which these three approach and sustain the piece -- and hold our interest for so long -- demonstrates their skills and their ability to interact so well.

Flutist Jorge Pardo and guitarist Niño Josele join the trio for two selections, and vocalist Gayle Moran, Corea’s wife, sings “Someday My Prince Will Come.” In the end, however, it’s Corea, McBride, and Blade at the center of this set, and they maintain their creative energy for over three hours -- an astonishing feat that they pull off with energy and a display of generous give and take. Recording engineer Bernie Kirsh captures every nuance of the group, and each disc has a palpable live ambiance. Trilogy demonstrates, once again, that Chick Corea is a vital and engaging musician at the peak of his powers.