James Taylor: "Before This World"

James Taylor hasn’t recorded an album of new songs since 2002’s October Road, although he released a Christmas album in 2004 (reissued by Columbia in 2006), and a collection of material by other songwriters, Covers, in 2008. In his liner notes to his new disc, Before This World, Taylor says he took 2013 off to write. He found somewhere to isolate himself, and began writing lyrics to melodies that had begun as demos he recorded with his band in 2010.

Before This World opens with the reassuring sound of Taylor’s acoustic guitar -- he’s such a good singer that it’s easy to overlook his fingerstyle playing -- and the easy comfort of his voice. Like many musicians of his generation, such as Van Morrison or, coming a little later, Mark Knopfler, Taylor is past the point of surprising us, but his solid skills as a songwriter can still reach out to move us. 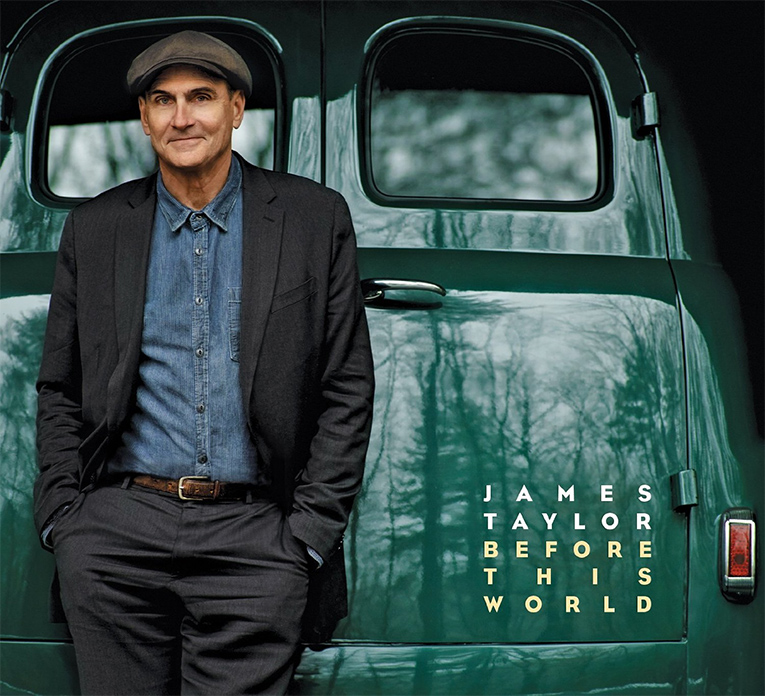 The country- and blues-colored “Today Today Today” is about change and permanence, and how life, even with its transformations, goes on: “And I feel the same inside / As when I caught this ride.” Andrea Zonn’s fiddle adds a bittersweet touch to the song, and Taylor’s harmonica solo is as clean and fresh as the air in a pine forest. Another string player, Yo-Yo Ma, plays a beautiful, gentle solo in “You and I Again,” a love song that is sentimental without being cloying.

Taylor can refresh a pop cliché, as he does in the road song “Stretch of the Highway,” by singing with such likable funkiness, buoyed by a warm horn arrangement. “Montana” evokes images of that state’s powerful landscape, and “SnowTime” tells the story of Mexicans transplanted to Toronto who use their music to help them get through the cold, unfamiliar winter. And the sappiness of “Angels of Fenway,” Taylor’s ode to the Boston Red Sox, is balanced by “Far Afghanistan,” an emotionally stirring rumination on war.

Sting’s warm harmony vocal in “Before This World/Jolly Springtime” never feels for a moment like a star turn, nor does Ma’s cello solo. The track itself is the most musically ambitious on the disc, with two distinct sections fitting together in a way that reminds me of the best moments of Taylor’s fourth album, One Man Dog -- never a critic’s favorite, but definitely one of mine.

“I’m lucky to have this caliber of musician playing my stuff,” Taylor says in the DVD included with the album’s deluxe edition. His touring group, which also records as the Steve Gadd Band, has been with him so long that the music flows with an apparent effortlessness that suits the singer well -- but the arrangements are complex, and the deep interplay among the players can come only from years of making music together.

Dave O’Donnell engineered and mixed Before This World at Taylor’s studio, in Massachusetts, and Ted Jensen mastered it at Sterling Sound. It has a pleasing openness, with a wide soundstage and a sharp focus on each instrument. Listening to so well-recorded a disc is as reassuring as hearing Taylor’s voice.