Jamaican-born jazz pianist Monty Alexander began playing in Kingston clubs and recording with local bands, including Clue J & His Blues Blasters, in 1958, when he was 14. Three years later his family moved to the US, and Alexander headed to New York City, where he soon found work in jazz clubs, including Minton’s, and eventually met and befriended a number of great jazz musicians. One of them, Oscar Peterson, introduced him to Hans Georg Brunner-Schwer, who owned the German record label MPS.

Alexander had already recorded -- for Pacific Jazz, RCA, and Verve -- before signing with MPS, where his stay was long and fruitful: He made 12 albums for MPS between 1971 and 1985, and Montreux Alexander: The Monty Alexander Trio LIVE! at the Montreux Festival, with bassist John Clayton and drummer Jeff Hamilton, was recorded in 1976 at the venerable Montreux Jazz Festival. It’s perhaps his most popular album.

About 20 years ago, I bought a used LP of Montreux Alexander pressed by Pausa, the American arm of Italian label Produttori Associati. This edition, which I think was done sometime in the 1980s, is surprisingly good, but MPS’s new reissue on vinyl is vastly more spacious and involving. Alexander’s opening notes in Ahmad Jamal’s “Nite Mist Blues” sustain longer, floating majestically on air, and when Clayton and Hamilton join in and the audience applauds, I got a greater sense of the depth and enthusiasm of its response, as well as a better feel for the size of the crowd.

Alexander shows the influences of Peterson and Jamal in “Nite Mist Blues,” playing long, melodic passages that impress with their speed and dexterity, without Alexander losing his grip on the melody. He colors his interpretation with blues and gospel passages, and his piano’s sound is more three-dimensional on the new pressing. When Alexander plays great, rolling chords, they’re more impressively full and involving. I could also better hear Clayton’s attacks on his double-bass notes, and was able to appreciate much more Hamilton’s subtlety in handling quick changes in dynamics. 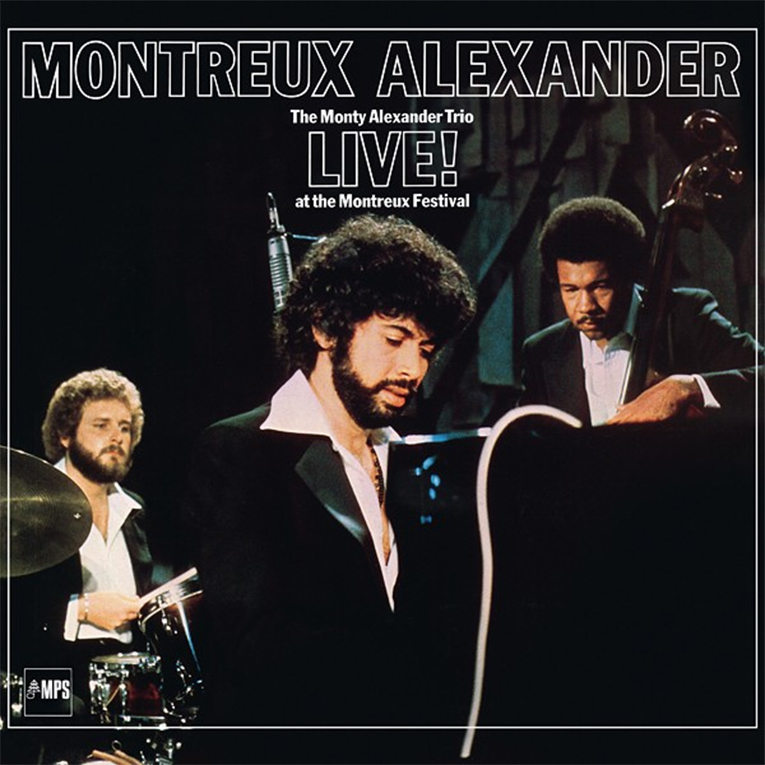 After that blues- and gospel-flavored opener comes “Feelings,” Morris Albert’s slice of ’70s kitsch. It comes off well here, because of the trio’s interaction and Alexander’s feel for melody, and here the improvement in sound over the earlier pressing is especially apparent. Clayton’s bass sounds more round, full, and authoritative, and Alexander’s piano rings out with greater solidity and conviction.

Alexander returns to blues and swing in a rollicking version of Duke Ellington’s “Satin Doll,” and in this track the new edition’s low-register detail is truly impressive. Clayton’s bass not only sounds larger; each note is also presented with more clarity, instead of smearing into the next note as on my 1980s pressing. When Alexander strikes a low note, it hits harder, and Hamilton’s kick drum pushes more air and comes more forward on the soundstage.

Clayton’s bass opens the trio’s take on Nat Adderley’s “Work Song,” and sounds so much better that my old LP now sounds fuzzy and lifeless by comparison -- on the new vinyl, there’s more breadth to the bass, and more realism. Alexander’s long blues runs in Henry Glover’s “Drown in My Own Tears” are fuller and more structurally complete, and Clayton’s bass lines thump harder. Hamilton’s snare drum in “The Battle Hymn of the Republic” snaps and resonates.

A couple of months ago, for SoundStage! Ultra, I reviewed MPS’s reissue of Freddie Hubbard’s The Hub of Hubbard; now, with Montreux Alexander, I’m again impressed by the quality of the label’s vinyl pressings. The backgrounds are dead silent, the sound richly detailed. Throughout, Dirk Sommer’s remastering brings more details forward; the overall effect is that the music is expanded, spreading out across a bigger, deeper soundstage.

I recommend all five of the titles I mentioned in the Hubbard review, and here’s one more: Oscar Peterson’s Walking the Line, a 1970 session with George “Jiri” Mraz on bass and Ray Price on drums (LP, MPS 0211989MSW). Peterson does two Cole Porter tunes, one of his own, and a few others, all with his usual energy and inventiveness, and the reissue reveals the harmonic complexity of his piano playing in suitably impressive scale. Mraz and Price are also well served in this very enjoyable trio recording.

Both Walking the Line and Montreux Alexander are entertaining and accessible, and each is filled with intelligent improvisation that holds up to repeated hearings. I can’t imagine them sounding better than they do on these excellently mastered and pressed LPs.