Given that he was the principal songwriter for Oasis, it’s not surprising that the first two albums from Noel Gallagher’s High Flying Birds were well crafted and tuneful. The group’s eponymous 2011 debut and its 2015 follow-up, Chasing Yesterday, were accessible and filled with hooks, while sounding different enough from Oasis to stand on their own. At times, Gallagher’s solo albums have felt somewhat reserved, as if he wanted to explore other facets of pop without returning to ground he’d already covered with Oasis.

Who Built the Moon? is loud and guitar heavy, a driving rock’n’roll album that reestablishes Gallagher’s mastery of the form. Producer David Holmes adds programming and other electronic effects, but the result still rocks. The Birds change with each disc -- this time, Keefus Cianda is on keys, Jason Faulkner on bass, Jeremy Stacey on drums. In fact, Stacey’s stomping percussion in “Fort Knox” gives that song its muscle, and the swirling keyboards, layered guitars, and voices build up an impressively dense structure of sound.

Gallagher pulls psychedelia, rock, funk, and more into Who Built the Moon?, and the various styles sit easily next to each other. “Holy Mountain” is great, rollicking rock’n’roll that echoes Dave Edmunds at his best, and the horn arrangement and backing vocals pay tribute to rock’s past while still sounding fresh. “Keep on Reaching” quotes the horn line from Sly and the Family Stone’s “I Want to Take You Higher,” and solidly establishes its funk heritage with a lyrical reference to Stevie Wonder.

The grand “It’s a Beautiful World” borrows a little from U2, and uses programmed drums and layers of guitars to build drama, with Gallagher’s voice surrounded by a strong echo and the verses building to a dynamic chorus. French singer-songwriter Charlotte Courbe, aka Le Volume Courbe, adds a spoken section in French that gives the track an exotic hue. “Black & White Sunshine” is the kind of ear-friendly pop that comes naturally to Gallagher, and he puts it across with jangly guitars and an impassioned vocal. 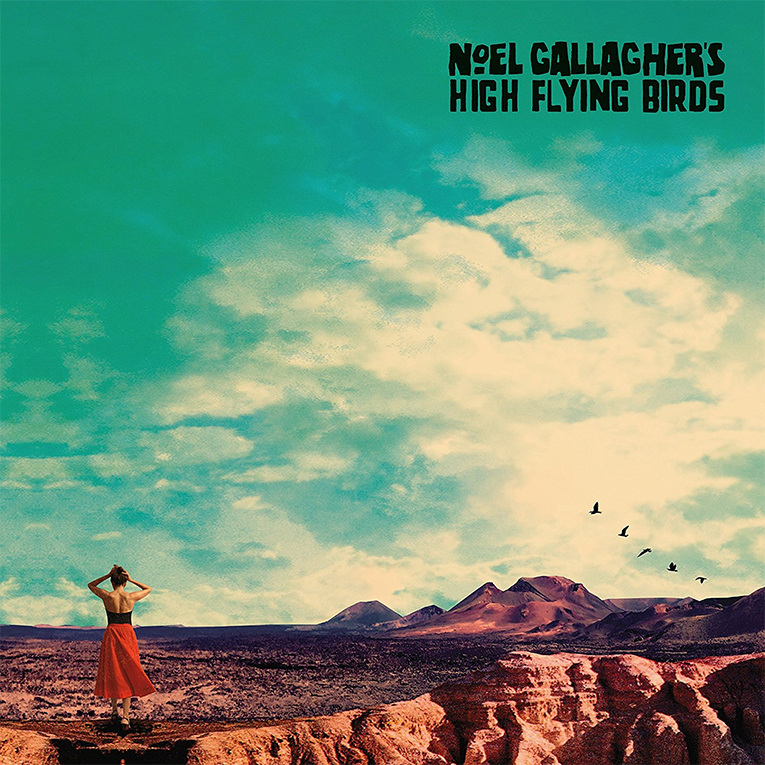 “The Man Who Built the Moon” is the closest Gallagher gets here to sounding like Oasis, and its ominous, distorted guitars give the song a cinematic tone à la John Barry -- it virtually begs to be heard behind the opening credits of a James Bond movie. While there’s a lot going on in every track, the acoustic-guitar-based “If Love Is the Law” and the brooding “Be Careful What You Wish For” help vary the album’s pace, as do two instrumental interludes.

Producer Holmes has packed Who Built the Moon? with layers of sonic detail that percolate to the top only with repeated hearings. Small touches, such as Gabe Noel’s cello in “Black & White Sunshine” and an eerie keyboard line in “If Love Is the Law,” tickle the ear and make these tracks more memorable. A number of guests, including Johnny Marr and Paul Weller, pitch in; Holmes is responsible for the programming and tape loops in most tracks.

In terms of sound, much of the album is too heavily compressed, and would have benefited from a deeper soundstage. But it’s a loud rock’n’roll album, and the aggressive sound fits Gallagher’s intentions. A live bonus track at the end, “Dead in the Water,” with Gallagher singing and playing acoustic guitar, accompanied by Mike Rowe on piano, is particularly affecting because it provides such a contrast in sound to the dense mixes on the rest of the album.

While I would have preferred better sound, this is a rock’n’roll album -- even with all the electronic effects, it basically comes down to electric guitars played loudly. It helps that the songs stay in my head and make me want to get up and dance.