At age 80, tenor saxophonist Charles Lloyd is going strong. He’s done an album almost every year since 1989, and is still challenging himself and his listeners. In 2016 he released I Long to See You, featuring guitarists Bill Frisell and Greg Leisz, who introduced elements of folk and country into Lloyd’s jazz. That group, which also included Lloyd’s regular bassist and drummer, Reuben Rogers and Eric Harland, was named Charles Lloyd & the Marvels, and returns in Vanished Gardens.

This time around the group is joined by singer-songwriter Lucinda Williams, so Vanished Gardens is credited to Charles Lloyd & the Marvels + Lucinda Williams. Both Frisell and Leisz have recorded with Williams before; it was Frisell’s edgy guitar solo that gave focus and emotional power to the version of “Dust” that appeared on Williams’s The Ghosts of Highway 20 (2016).

The arrangement of “Dust” here is more spacious. As Rogers and Harland establish a subtle, flowing foundation, Lloyd begins with a brief solo on tenor sax that crackles with energy and leads into Williams’s starkly expressive vocal. Lloyd injects melodies behind her voice, and takes two more solos that reflect the lyrics’ anguish and sadness. Leisz’s pedal steel is mournful without being maudlin -- he and Frisell weave a complex tapestry of sound that builds in power behind Lloyd’s knotty closing solo. 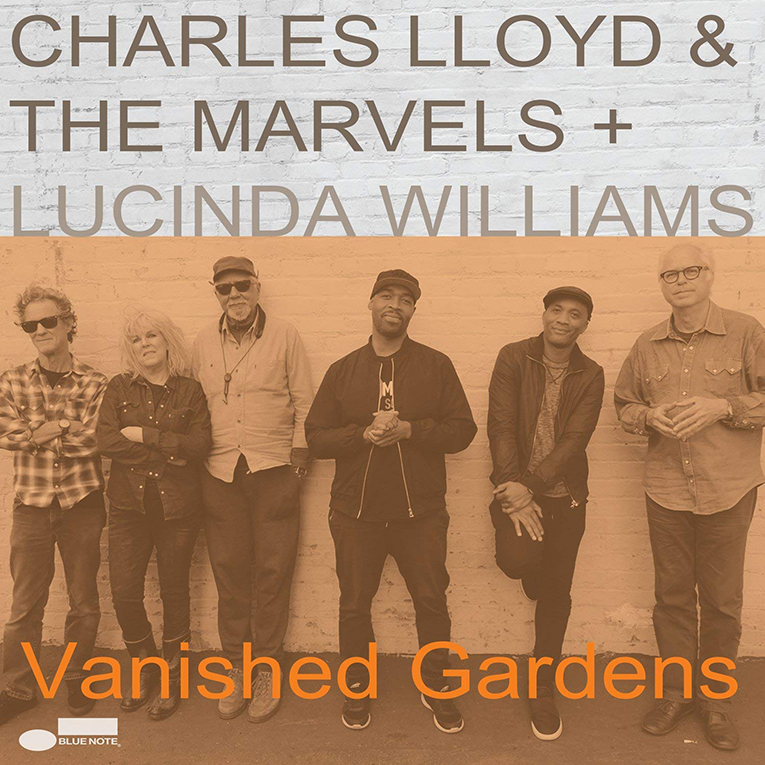 “Ventura” originally appeared on Williams’s seventh album, World Without Tears (2003). Here it’s taken at a slower pace that lets it unfold more carefully. Lloyd’s solo is pointed and melodic, and Williams’s singing is heartfelt, deeper and less mannered than in the original. She sings a new song, “We’ve Come Too Far to Turn Around,” with a gospel fervor that Lloyd matches in his equally spirited solo, driven by Harland’s powerful, subtle drumming. Jimi Hendrix’s “Angel” is the only song with Williams that doesn’t quite work -- she pushes it too hard instead of letting it carry her along.

The instrumental tracks benefit from this band’s now having played long enough together to develop an even stronger rapport than it had on I Long to See You. “Defiant” rocks solidly, Lloyd playing against it a biting jazz solo that contrasts with Frisell’s understated melodies and Leisz’s country-flavored pedal steel. In the title track, Frisell’s muted guitar strings are subjected to a slight delay, creating a percussive effect that skitters alongside Harland’s drums. Lloyd plays a fractured, expansive tenor solo that moves skillfully from free jazz to blues to bop.

In Lloyd’s “Blues for Langston and LaRue,” Leisz’s pedal steel sets a tone of Western Swing that lets the composer stretch out, this time on flute, with long, flowing blues lines. Frisell takes a tasteful turn on acoustic guitar, and Leisz blends blues, jazz, and country in a gorgeously developed solo that underlines how well the many strains of music on Vanished Gardens come together with apparent ease. 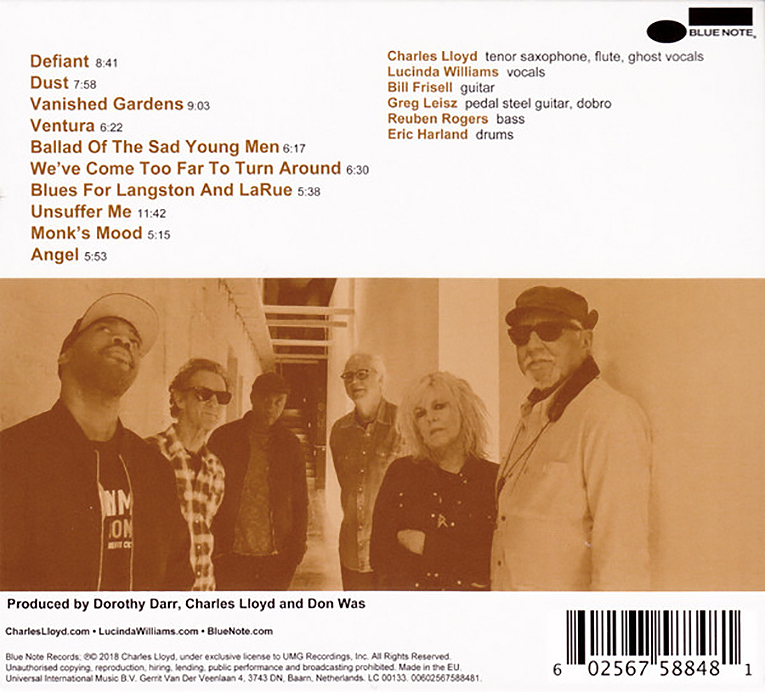 The longest (11:42) track is a reimagining of “Unsuffer Me,” a Williams tune from her album West (2007). The players give Williams a darkly ominous, blues-filled background that elicits more honest and deeply felt singing from her than in her original version. Leisz again sets the atmosphere with sustained, ringing lines that suddenly become brutally jagged. Lloyd’s anguished, moaning solos give even more vivid voice to the song than do the lyrics, and Frisell’s arpeggios vary in attack, for heightened dynamics and intensity. This Southern Gothic tale is both beautiful and frightening.

The responsive and vigorous playing of Eric Harland and Reuben Rogers are important elements of this album’s power. They shine in every genre represented on Vanished Gardens, skillfully and seamlessly switching among them, as in the title track. The beautifully detailed recording, courtesy EastWest Studios and Bernie Grundman Mastering, put the musicians in my listening room in three dimensions -- this terrific music had great realism.

After two very enjoyable recordings by Charles Lloyd & the Marvels, I eagerly await more. And if their “plus one” is once again Lucinda Williams, that’s fine, too.