I can’t think of another guitarist of the classic-rock era who’s recorded more unremarkable albums than Carlos Santana. After a run of great to very good LPs from the late 1960s through the late 1970s, things began to thin out with Inner Secrets (1978). Santana albums became dull, with perhaps only one or two decent tracks each. Bright spots, such as the Carlos Santana solo albums Havana Moon (1983) and Blues for Salvador (1987), were rare.

Supernatural (1999) gave Santana his first hit record in ages, but its production template -- bring in singers then on the charts and let Carlos accompany them -- made him, in effect, a sideman on his own recordings. Subsequent releases followed that pattern for a while, with diminishing artistic and commercial returns. With Shape Shifter (2012) and Corazón (2014) things began to look up, but it wasn’t until Santana IV (2016), with much of the same band that had recorded Santana III 45 years earlier (1971), that Carlos Santana was again presented on disc as a consistently viable musician.

Rick Rubin produced Santana’s newest album, Africa Speaks, his first for Concord Records. Carlos, long a fan of African pop, was inspired by that music’s rhythms and sounds, which are audible everywhere here. The singer Concha Buika -- born in Majorca, based in Spain, and now internationally popular -- cowrote and appears on every track. The band recorded 49 tracks at Rubin’s Shangri-La Studios, and for this release chose what they thought were the 11 best.

Karl Perazzo’s congas announce the title track, which features a brief spoken statement from Carlos. His scorching guitar line brings in Buika, singing in Spanish over a melody that unfolds in slow, smoldering fashion, until drummer Cindy Blackman Santana, Carlos’s wife, trades lines with Perazzo that lead into a more rhythmically dense and faster second half. David K. Mathews’s piano chords enrich and expand the music, with backing vocals by Andy Vargas and Ray Greene. 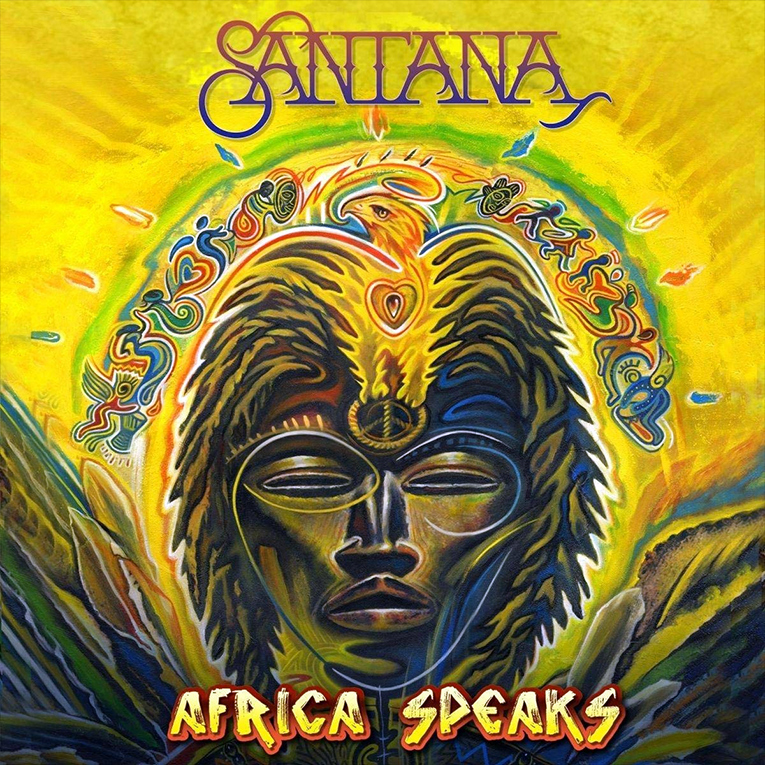 Perazzo and Blackman Santana begin “Batonga” with a flurry of drum rolls that settle into a rhythmically complex groove, over which Buika sings impressionist lyrics about the plight of the poor. Santana’s guitar glides around her voice, his solos pointed and fiery. Mathews’s lengthy solo on Hammond B3 lights up the track, as Carlos adds stabbing guitar lines.

The hard-rocking “Yo Me Lo Merezco” features an especially powerful vocal by Buika, with assistance from Laura Mvula in the ear-catching chorus -- just one example of the variety of styles that make up Africa Speaks. “Paraísos Quemados” hints at Chic in its solid funk, moved along by Tommy Anthony’s terrific rhythm guitar and Perazzo’s percussion. “Breaking Down the Door” adapts French songwriter, drummer, and bandleader Manu Chao’s “Abatina,” and in this band’s hands its Calypso rhythms flow easily.

The rhythmic complexity and variety of musical styles on Africa Speaks push Carlos Santana into some of his best, most inventive playing in years. But while it’s his name that appears above the title, this album is also Buika’s. With her strong voice she expresses a wide range of feelings, from joy to rage, with conviction and heart. The entire band plays at an extremely high level, especially Perazzo and Blackman Santana, and Benny Rietveld’s straightforward but effective bass lines help pull it all together.

My only reservation is that Stephen Marcussen mastered the album at a high volume, greatly compressing its dynamic range. Every instrument is pushed forward, with the result that much doesn’t happen as it should: the percussion doesn’t ring out, the bass lacks definition, the voices aren’t up front. Lowering the volume helps -- but the best Santana album since Blues for Salvador deserves better sound.