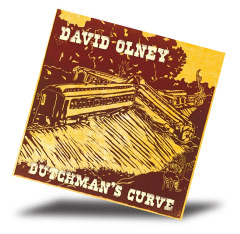 Eloquent imagery and raw acoustics paint pretty, bluesy ballads on Dutchman’s Curve, David Olney’s April release. The Rhode Island-born singer-songwriter has produced an impressive discography since the early 1970s, and his latest album is a worthy addition. Unafraid to bring nontraditional instruments into the blues realm, Olney invites cellist/violinist David Henry and Jim Hoke on autoharp to throw the listener for a loop on several tracks, and he tries his own skillful hand at the ukulele, which fits in smartly on the opening “Train Wreck” and the loping, sultry “I’ve Got a Lot on My Mind.” “Little Sparrow” offers an oddly country-tinged homage to French chanteuse Edith Piaf, but it somehow hits the mark.

Each song tells an intricate story, and Olney reflects on a variety of subjects, from a 1918 Nashville train wreck that was the worst in American history to Vermeer’s painting “The Girl with the Pearl Earring.” With poetic inspiration from such a wide range of sources, it’s no wonder that his songs have been covered by such artists as Emmylou Harris, Johnny Cash, Linda Ronstadt, and Steve Earle. Each of Olney’s songs bears a saga, a narrative, or a recount of some forgotten piece of history. On “Way Down Deep,” Olney snarls a murky number over a resonating electric slide guitar and beefy baritone and tenor sax. Most of the tracks are originals, with the exception of the Tommy Goldsmith song, “Hey Sha La La La,” and The Flamingos’ “I Only Have Eyes for You,” both soul songs that reveal Olney’s passion for belting out a good “doo wop sh’bop” now and again. Dutchman's Curve is a highly enjoyable album that’s not too serious but is seriously well produced. It’s a thoughtful and intelligent disc that’s rife with pretty riffs and imagery.