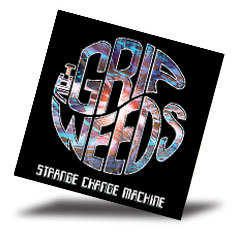 The Grip Weeds have finally released their fifth disc, and it’s cause for celebration. Strange Change Machine roars to life on "Speed of Life" with an explosion of drum rolls by Kurt Reil, solidifying his standing as one of rock’s great timekeepers. The song’s Mellotron, throbbing guitar delays, ringing major seventh chords, and soaring harmonies are proof once again that the Grip Weeds belong in rock’s pantheon. Kristin Pinell and Rick Reil are a formidable two-guitar lineup, and the disc demonstrates that old-school guitar effects, real keyboards, and analog recording are the keys to great rock'n'roll.

Strange Change Machine contains more than 80 minutes of music over two discs, and there isn’t a dead moment on it, although I might have enjoyed a less obvious Todd Rundgren cover than "Hello, It’s Me." The amazing thing about the Grip Weeds is that the band can play such tough, no-holds-barred rock'n'roll, and still be subtle, elegant, and melodic. Strange Change Machine is also available as a two-LP set. I need to catch this band live.