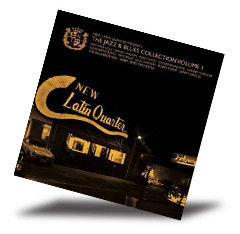 The Japanese have had a passion for American jazz since the 1950s, culminating in the erection of the New Latin Quarter club in Tokyo. Boasting 100 "hostesses," 40 employees, and 80 tables (300 patrons), the establishment became a crown jewel in the East, both for hearing jazz and, according to the program notes, for espionage and spying. One envisions a scene where a mobster is contracted to deliver illicit cargo while listening to Julie London. The artists who’ve played there constitute a who’s who of jazz, and their performances have been preserved. In 2007, 47 reel-to-reel tapes were discovered, and they’ll now be available on CD.

Rather than duplicating any particular evening, the CDs present excerpts from various sets. Volume 1 gets off to a relaxed, swinging start as Nat "King" Cole (1963) sings an impeccable, suave, and swinging version of "The Way You Look Tonight," followed by Nancy Wilson (1970) definitively vamping "The Man Who Got Away." Performances by Keely Smith, Chubby Checker, Louis Armstrong, Patti Page, Julie London, Bobby Troup, Sammy Davis Jr., The Mills Brothers, and the Harry James Orchestra fill out the disc. Page’s "What Is This Thing Called Love" (1962) is a revelation. I’d never thought of the "singing rage" as a jazz performer, but here’s proof that she could be just that. The disc finishes with Louis Armstrong doing a rousing version of "When the Saints Go Marchin’ In" (1961).

All of the cuts present previously unavailable recordings by music legends in their prime, and the recorded sound is mono and better than you might expect. We can look forward to additional volumes in a series that delivers real treasures for the jazz lover.