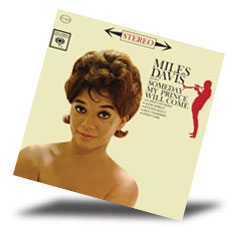 Taped over three days in 1961, Someday My Prince Will Come is one of Miles Davis’ most mellow sets. It still features the solid-as-a-rock rhythm section of Wynton Kelly on piano, Paul Chambers on bass, and Jimmy Cobb on drums. The sax players fluctuate. John Coltrane was no longer playing regularly but came back to the studio to guest on the title track and “I Thought About You.” The rest of the tenor tracks are handled by Hank Mobley, who had only been with the group for a short time. It shows a little in his playing, which is more reserved than that of Coltrane but has a lighter, neat, and simple beauty of its own. There are some miraculous moments throughout this set, and not always in the big sections. Listen to that great rhythm section in “Prancing” when Chambers has a bass solo, yet Kelly and Cobb continue to accompany him with awesome subtlety. There’s never a throwaway note with those three guys. Davis is at 100 percent and plays with great beauty and depth on every track.

The recording deserves mention. Most people think of surround when they think of SACD and multichannel, but many analog masters were produced with only three tracks: left, right, and center. Someday My Prince Will Come is one of these, and the SACD format allows us to hear it exactly as it was mastered. The piano is in the left channel, drums in the right, and Miles and the bass in the middle. Though it’s still a bit exaggerated in the separation of channels, the impression of three-track mono is lessened by bleeding a tiny bit of the drums and piano into the left and right channels without bleeding any of Miles’s center-channel solos back. The overall results define the old “clean as a whistle” saying, and the disc’s sound clearly reveals every nuance from each player.