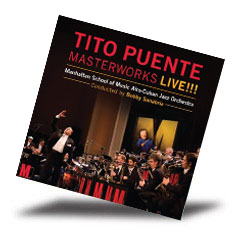 Tito Puente’s name is legendary. He performed from 1937 to 2000 and made over 100 albums, becoming almost synonymous with mambo and salsa, and he’s largely responsible for bringing Afro-Cuban music into the mainstream, so much so that people thought he was Cuban when in fact he was Puerto Rican. Bobby Sanabria, a drummer, composer, arranger, and Grammy-nominated recording artist, has taken up Puente’s torch, as well as a position at the Manhattan School of Music since 1999.

Puente was known as much for his sizzling arrangements as his original music, so it makes sense that Sanabria and his talented conservatory band created a concert using Puente’s fiery charts in either original or reconstructed guise. The exciting and authoritative readings from this live event are nothing short of perfection. Puente originals such as “Ran Kan Kan,” “Mambo Adonis,” and “Mambo Buddha” share time with “Autumn Leaves,” “Bohemia (Birdland) After Dark,” and “Ritual Fire Dance.” The band is outstanding at all times, and its soloists sound thoroughly professional, especially lead trumpet Paul Stodolka and vibes player Norman Edwards. The sound is big, bold, and brassy, which is just what this music needs.