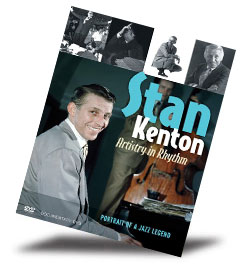 “Kenton was very severe about what he did,” percussionist Jack Costanzo says near the beginning of Stan Kenton: Artistry in Rhythm. “He was gonna do it no matter what.” Kenton would have been 100 this year, and Graham Carter’s documentary, produced in association with the Los Angeles Jazz Institute, celebrates a musician who pursued his singular ideas in jazz despite the opinions of critics. Musicians from his long career appear throughout the film to extol Kenton’s virtues as a leader, mentor, and educator. Costanzo, Eddie Bert, and Howard Rumsey are among the players who recount stories from the early years, while Mike Vax and Joel Kaye share later recollections. Ken Poston of the Los Angeles Jazz Institute puts the various phases of Kenton’s career in perspective, with some help along the way from venerable DJ and critic Herb Wong. Jazz arranger Bill Holman talks about his work with Kenton, especially on Contemporary Concepts, an album even his detractor’s praise. Kenton himself is present in voiceovers describing his music and influences and in footage from performances and jazz clinics.

Stan Kenton: Artistry in Rhythm is presented in standard definition, and the sound is predominantly mono. Some of the performance footage, even the later films from the ‘70s, is in poor shape. But Kenton fans will ignore those limitations and find the DVD to be essential viewing.