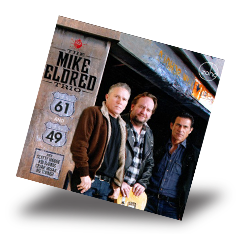 You wouldn’t be surprised to see the photo on the cover of the Mike Eldred Trio’s new disc, 61 and 49, on the door of your local bar advertising an upcoming Saturday night show. Eldred is a California-based guitarist and singer who plays and writes the kind of roots music you’d hear in smoke-filled taverns, back when you could still smoke in them. "She’s a Rocket" is an old-time rocker, with Ike Turner sitting in on a rollicking barrelhouse piano, and "Jake’s Boogie" is a shuffling blues-guitar workout that lets Eldred throw out a lot of quick notes and string bends with little effort and a good deal of feeling. Bassist John Bazz and drummer Jerry Angel both played in the Blasters and know this music cold. "For a Girl" evokes a Stones-like radio friendliness, while "Mr. Newman" hints at a strong storytelling ability that Eldred should develop further. Guitar great Scotty Moore helps out on "Ms. Gayle’s Chicken House," and Cesar Rosas from Los Lobos adds a simple but effective solo to "This Old Train," which also includes a terrific Jordanaires-style backing vocal from The Job’s Quartet. Eldred and Kid Ramos trade licks on "Louise," a great jump blues track, but the most affecting song on the disc might be "Don’t Go Down There," a field holler with Eldred on vocals accompanied by the Emmanuel Church Gospel Choir. You’ve heard the music on this honest, unfussy recording before, but you’ve rarely heard it done this well.