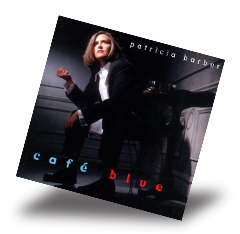 Patricia Barber’s third release, Café Blue, was her 1994 breakthrough, a critics’ favorite that helped the singer/pianist develop a strong following. This vinyl reissue is, by my count, the third appearance of Café Blue on disc. Jim Anderson, the original engineer, remixed this two-LP/33 1/3rpm set at Capitol Studios in Hollywood; Bob Ludwig remastered it; and Doug Sax cut the lacquers for pressing by RTI. Anderson had already taken great care with the recording, but he was eager to use Capitol’s tools, both old and new, to tweak it. I compared this pressing with the MFSL Hybrid SACD, and the difference on "What a Shame" was immediate and dramatic. The heavy reverb that surrounds Barber’s voice and, to some extent, the other instruments on the earlier disc is much reduced on this LP. Her voice now has just a hint of reverb and sounds more natural, which gives the other instruments more space to breathe. At first I thought I preferred the older mix on "The Thrill Is Gone," but after a few listens I liked the new version much more. It pulls the bass back just enough to let it flow better with the music and gives Barber’s voice more focus. Fans may go back and forth between their earlier CD/SACD or LP and this new one, especially since the songs are in a different sequence, but they won’t want to miss this reissue.