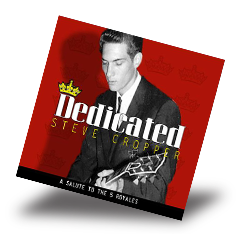 When Steve Cropper first heard "Think" by the "5" Royales, he must have thought, "Man, that’s what I want to sound like." The R&B group was at its peak for roughly ten years beginning in 1952, and Lowman Pauling was its guitarist and principal songwriter. His simple, clean, and powerful guitar style was a prime influence on Cropper’s work, and Cropper pays tribute to him and the group on Dedicated. He and producer Jon Tiven get help from a variety of singers, including Steve Winwood, Bettye LaVette, Sharon Jones, and Lucinda Williams. Williams is mannered and overwrought on "Dedicated to the One I Love," but she does a nice, restrained turn on "When I Get Like This." Blues Traveler’s John Popper is excellent on "My Sugar Sugar," but the high points belong to LaVette and Willie Jones on "Don’t Be Ashamed" and Sharon Jones on "Messin’ Up." The band includes Muscle Shoals stalwarts Spooner Oldham and David Hood, and the horn arrangements by Cropper, Tiven, and Neal Sugarman are true to the "5" Royales’ original ’50s sound. Cropper, who’s outstanding throughout, proves that it isn’t how many notes you play; it’s how you play them. Dan Penn, who does a beautiful vocal on "Someone Made You for Me," engineered the recording in his own studio, and the sound is as vintage as digital can get.