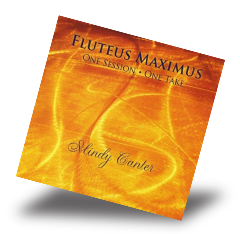 When I was in college, Herbie Mann was a big part of the music scene. His version of Memphis blues crossed boundaries to successfully mix soul, pop, and jazz, and just about everyone could enjoy it. When I played this new album by flutist Mindy Canter, it popped the cork on a lot of happy memories. Though classically trained, Canter visits the same eclectic mix that Mann pursued. In fact, she plays some tunes closely associated with Mann, such as "Do It Again" and "Watermelon Man." A virtuoso herself, Canter has a backing group that grooves right along with her, heart and soul. Guitarist Denny Geyer stands out, and not just for his rich and vibrant guitar tracks. He proves to be a fine blues singer on "High Heel Sneakers," "Funny How Time Slips Away," "Hallelujah," and the old Tennessee Ernie Ford hit "16 Tons." The album closes with songs that work but might seem to some like strange bedfellows to the others on the disc -- "Over the Rainbow," featuring a Latin beat, and "Happy Trails," which features a flutist’s idea of a "lonesome wail." To cash in on the funk aspect of the disc, Canter overdubs some amazing Hammond B3 tracks that are perfectly recorded, always audible, and never unduly spotlighted. The other instruments are just as well recorded; Paul Smith’s bass is rich and full, providing terrific impetus to every track. To preserve spontaneity, the group recorded one take of each song in a four-hour session. I’d be up for a second volume and maybe a spin-off disc featuring Geyer as vocalist.