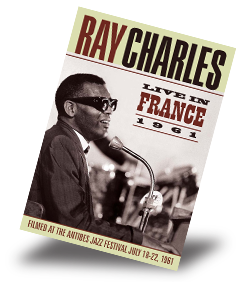 When Ray Charles appeared at the Antibes Jazz Festival in July 1961 during his first European tour, he’d just finished a great run of recordings with Atlantic Records and was well on his way to international stardom. The main events on this DVD are two complete sets from July 18 and 22, with selections from the July 19 and 21 sets filling out the program to just over 110 minutes.

Along with his four backup singers, Charles took seven instrumentalists with him to Europe, and they open each set with two jazz instrumentals that let the players, including David "Fathead" Newman, Hank Crawford, and Charles himself, show off. The rest of each set comprises many of Charles’s best-known tunes, including "Let the Good Times Roll," "Georgia on My Mind," and "What’d I Say." The musicians sound tentative in spots on the first set, but by the last day of the festival they’re relaxed and swinging. A comparison of the same songs in three of these sets shows how, within a fixed arrangement, Charles left room for improvisation and chance.

The performances were originally filmed for French television and edited to be broadcast as highlights from the festival. The producers of this release tracked down 105 minutes of film, along with radio recordings of the full sets. They’ve done a heroic job of reconstructing and syncing the film and filling in the gaps with footage of the audience. The 16mm film quality is very good, while the mono sound is lively if not of audiophile quality. Despite that slight reservation, Live in France 1961 is an essential document for Ray Charles fans and students and lovers of American music.