The broad umbrella of modern Latin music has grown into a global mainstream genre, but much of its lineage and heritage can be traced to “son,” a musical style popularized in Cuba during the early 20th century that unites African and Spanish rhythm and structure. Without son (literally meaning sound in Spanish), there would be no salsa, no mambo, and no “Macarena.” What began as a marginalized musical expression for the island nation’s poor and dispossessed has grown into a top contender in the hierarchy of modern popular music and has proven a formidable forebearer for modern Latin sounds. The marriage of Spanish and African cultures as a whole continues to influence the rest of the world for its contributions to music, dance, language, and art. An impassioned sensuality and infectious spirit unify the four albums I’ll share here in this segment. 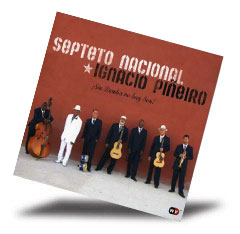 As son evolved and gained popularity, musical groups of six and seven members formed across Cuba to perform and expand upon the newly emerging style. Cuban musician and composer Ignacio Piñeiro is credited with writing over 300 sons, and in the late 1920s he formed a group that would become Septeto Nacional, a veritable crown jewel of Cuba’s musical landscape and one that, generations later, is still performing. The group was nominated in 2004 for a Grammy, and they now return with their latest release, ¡Sin Rumba No Hay Son! (CD, World Village 468105), an acoustic offering of inventive new material alongside reinterpretations of Piñeiro’s now-classic century-old compositions. The disc branches out beyond son alone. While the romantic bolero, “En Tus Ojos Yo Veo” and the lively guaracha, “La Fiesta de los Animales,” don’t subscribe to the standard parameters of son, as with tracks such as “Donde Andabas Anoche,” they serve to further evince the development of Afro-Cuban musical culture. Septeto Nacional has long played an important role in Cuba’s history, and ¡Sin Rumba No Hay Son! may just be the catalyst to help them leave their latest indelible mark. 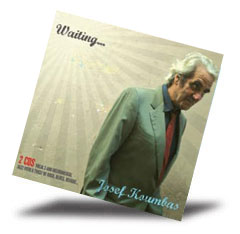 Jazz vocalist and composer Josef Koumbas first visited Cuba in 1990 to play the International Jazz Festival. He returned many times in the years that followed, eventually moving to Havana and establishing himself in the jazz scene. An expansively hybridized melding of jazz, Latin, blues, fusion, and more, his latest album, Waiting, (CD, Tumi 160) is packaged as two discs. The first disc features Koumbas’s lounge vocals on original ballads with a talented backing band of rotating Cuban musicians and soloists, all giving the listener a great sense of Koumbas’s style as a songwriter and talents as a composer. The second disc humbly removes the vocals altogether and offers a closer listen to the instrumental version of each song. I initially thought this was redundant, but after listening to each I found that both discs have a distinct appeal and the instrumental album lets the spotlight truly shine on Koumbas’s Cuban collaborators, who include gifted pianist Roberto Carcases and trumpeter Alexander Abreu. Standout tracks include the salsa number “Dance into My Heart” and the sentimental, bluesy “Everybody.” 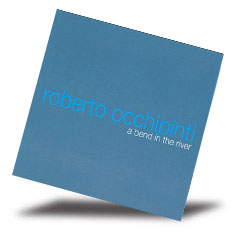 While we’re still on the topic of Cuba, worthy (though belated) mention goes to Canadian bassist-composer Roberto Occhipinti and three stellar Cuban musicians, alto saxophonist Luis Deniz, pianist David Virelles, and drummer Dafnis Prieto for their excellent 2009 jazz release, A Bend in the River (CD, Alma ACD11182). Six original numbers fit lushly alongside a soothing rendition of John Coltrane’s “Naima.” The bassist / band leader sets a solid foundation on each track, locking in rhythmically with drummer Prieto while giving ample room to all for solos and experimental interpretation. The title track is a grooving force of a song that moves steadily downstream with the fluidity of a real river, building in anticipation and intensity just enough to make you eager to catch the upcoming changes around the bend. I’m sorry I missed this one when it was released last year, but better late than never. It’s still widely available and worth obtaining for you jazz (with Latin flavor!) lovers out there. 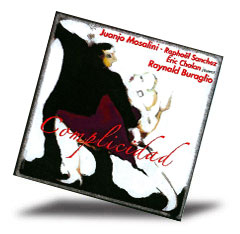 Around the same time that Cubans were popularizing son, the similarly Spanish-African-inspired tango was traipsing its way out of Argentina and around the world. Both the dance and the music known as tango caught on and spread so successfully that in 2009 tango was declared a world cultural heritage of humanity by UNESCO. French multi-instrumentalist and composer Raynald Buraglio celebrates the music of tango with a new recording of his original material, titled Complicidad (CD, Frémeaux & Associates FA535). Pianist Raphael Sanchez conducts an orchestra of collaborators including Juan José Mosalini (bandoneón), Eric Chalan (bass), and Stephane Renier (drums) as they deftly navigate the global mélange of Buraglio’s work, marrying tango to waltzes, bossa novas, and ballads with flair. Recorded live at the New Caledonia Music Conservatory in Nouméa, France, Complicidad is a fine example of how Latin music has become a true cultural phenomenon, one capable of inciting grand passion, influencing global culture, and undoubtedly deserving of continued praise.