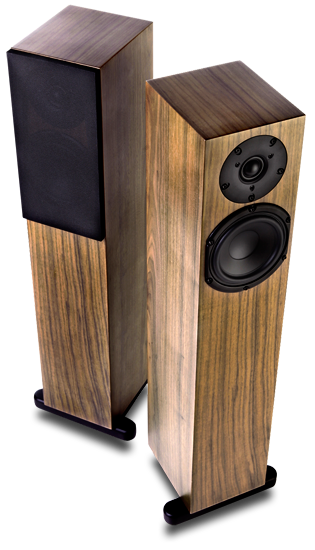 Gemme Audio is settling into the latter half of only its first decade, but the Montreal-based company is already proliferating its high-end know-how into products that it hopes will become objects of desire to a much wider audience. Best known for its ultracool VFlex loudspeakers ($6583 to $17,572 USD per pair), Gemme has a reputation for getting huge performance out of relatively small speakers at prices that are, alas, unaffordable to most. In the past few years, however, Gemme has worked to find a way of delivering a lot of that performance for much less money, and they believe they’ve found the right balance in their new Tonic family of affordable speakers.

The Tonic line debuts with three members: the G3 bookshelf ($850/pair), the two-driver G5 floorstander reviewed here ($1395/pair), and the three-driver G7 floorstander ($1795/pair). At these base prices, the Tonics come in a beautiful walnut veneer; piano black is available for an upcharge. The Tonic G5 is relatively small, measuring just 30"H x 6"W x 7"D and weighing a slight 18 pounds. At its bottom is a tripod base with two adjustable spikes at the front and one in the back. The speaker has a 1" ring-radiator tweeter and a 5.25" treated-paper woofer, and its grille is held in place with magnets -- an excellent solution that I wish all speaker makers would adopt. Gemme says it uses only high-spec crossover parts: pure copper, air-core inductors, polypropylene capacitors, and over-specified resistors. The capacitors are of particular note; most speakers in the Tonic’s price class use much cheaper electrolytic caps.

The G5’s claimed specifications are an in-room frequency response of 45Hz-20kHz, a nominal impedance of 6 ohms, and a sensitivity of 86dB. The recommended range of amplification is 20-100W; Gemme says that the G5 can handle 120W of peak power. 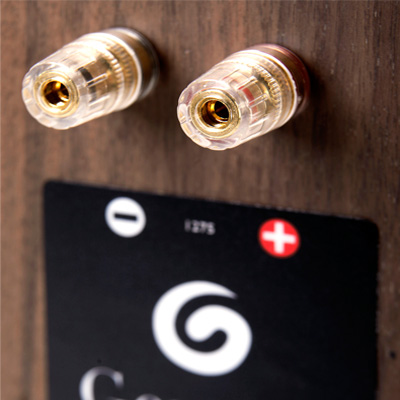 The rear of the Tonic G5 illustrates how serious Gemme is about quality. While most speaker companies would port a $1395/pair speaker with a simple plastic tube fitted with a flared end, Gemme has instead contoured the enclosure’s rear panel where it meets the port tube to ensure that the air exiting the tube doesn’t create performance-robbing turbulence. Doing it the Gemme way is obviously more expensive and time-consuming, but the result is a rear panel that looks as if it belongs to a much more expensive speaker, and a pair of high-quality, five-way binding posts doesn’t hurt the effect one bit. Returning to the front of the speaker, each member of the family has "Tonic" spelled out in raised appliqué letters. Those, too, are of high quality: the company that makes the letters also does work for Porsche.

After fiddling with placement -- easy to do with a speaker weighing just 18 pounds -- I found that the G5s sounded best in my room when placed about 8’ apart and 3’ from the front and side walls. I liked the treble response best with the Gemmes slightly toed in, so that laser beams firing from the tweeters' centers would merge a few feet behind my head.

Because it’s light and sits on only three feet, the G5 can be a little tipsy. To keep the speaker upright, Gemme has built a chamber into its bottom, into which sand can be poured to lower the center of gravity. I highly recommend doing this.

I auditioned the G5s primarily with my reference Simaudio Moon i5.3 integrated amplifier, but also tried them with the Magnum Dynalab MD309 and Calyx’s The Integrated (reviews of both forthcoming). Speaker cables were Synergistic Research’s Galileo Universal Speaker Cells fitted with the company’s Basik cable leads. The only source I used was an Ayre Acoustics QB-9 USB D/A converter connected to an Apple iMac running Amarra 2.1 playback software, the two linked with a Cardas Clear USB cable. I gave the G5s about 100 hours of break-in before sitting in judgment of them.

Early on, I had the Tonic G5s sitting astride my Definitive Technology Mythos ST speakers, which are a third again taller but no wider. They also contain two more drivers than the G5s, one of which is a powered subwoofer. Despite this apparent advantage in favor of the Mythos ST, as I sat listening I had a hard time figuring out which speakers were producing the sound. I knew I’d switched the speaker cables from the Def Techs to the G5s earlier in the day, but for several seconds I wondered if my wife had swapped them back. My first note: "These little speakers sound big!"

Not only did the G5’s sound belie its size, but, as is implied above, it was difficult to associate the Tonics with what I was hearing. Indeed, with the right recordings, the G5s did an incredible job of disappearing. For example, "The Way You Look Tonight," from Michael Bublé’s self-titled album (CD, Reprise 48376), leapt free of the Tonics as if the speakers had had nothing to do with producing the sound I was hearing. The soundstage was wide and deep and full -- no dropouts or weak spots were to be heard anywhere. Layering of instruments, too, was excellent. The opening of "Summer Fling," from k.d. lang’s Invincible Summer (CD, Warner Bros. 47605), which features finely layered voice, guitar, strings, and Wurlitzer organ, each in its own plane, was beautifully rendered by the G5s -- and in the chorus, lang’s repeatedly overdubbed voice was just heavenly. Here the sound of the voice wasn’t just bigger or fatter, it was layered like a mille-feuille cake: each additional vocal track was easily discerned but also integral to the delicious whole.

"God Is Real," from India Arie’s Voyage to India (CD, Motown 001427302), was another track that highlighted the G5s’ ventriloquial talent for placing sounds outside the speakers’ outer boundaries, particularly in those passages where answering-machine recordings seemed to leap straight out of my sidewalls, 3’ away from the speakers. It was an exercise in futility to link these sounds back to the Tonic G5s. Meanwhile, an acoustic guitar seemed to hang, apparition-like, smack between the speakers. This high-end stuff was coming from a small box with a low price.

The Gemmes’ ability to image speaks to the quality of that Danish ring-radiator tweeter and the simplicity of the crossover, which uses a minimum of parts to achieve maximal performance. But the G5’s tweeter didn’t just image; it also shimmered and swished and sparkled with a naturalness rare at its price. Not once did the G5’s tweeter sound glassy or etched, even with the often harsh-sounding tambourine in Miles Davis and Gil Evans’ version of Rodrigo’s Concierto de Aranjuez (Adagio), from Sketches of Spain (CD, Columbia/Legacy 65412). The tweeter displayed its talent for fine detail on this track as well, the clack of the castanets beginning with the sharp sound of the impact point, followed by the ringing of the instrument’s body.

"Please Send Me Somebody to Love," from The Best of Sade (CD, Sony 85287), has amazingly recorded drums that sounded very natural through the Tonic G5. The bass drum in particular seemed as if it were right in front of me, not so much because of its impact but because the sound had so many elements that made it seem live: the impact of the felt pedal head on the drum’s skin, internal reverberations that sounded as if muffled by a pillow, the slight buzz of the metal hoops securing the skins -- it was all there, and all so real. Sade’s breathy, under-emphasized voice was also rendered exquisitely. 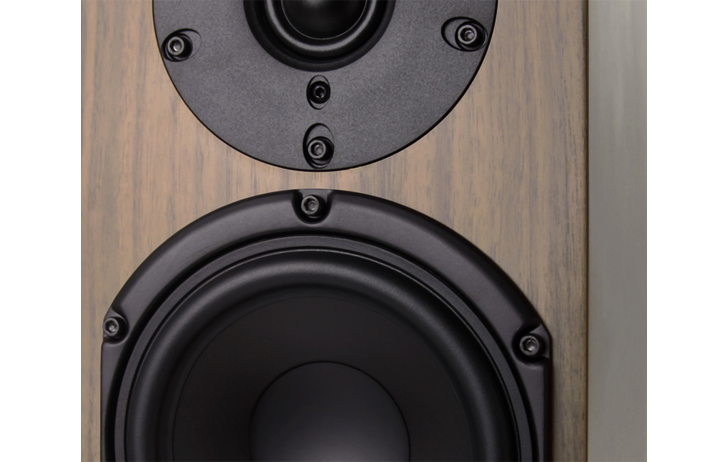 There’s so much more to say about the G5’s superb treble performance, but I really should move on. OK, one more example: "Folklore," from John Patitucci’s Line by Line (CD, Concord 30003), is all about subtle sounds: the gentle rattle of the snare drum’s snare, soft taps on the ride cymbal, clean, decisive strikes on the tom-toms. It’s a top-tier recording that the Tonic did great justice to with clean, transparent highs.

Saxophone, including Patitucci’s, played to another of the G5’s strengths: an inviting, very slightly warm midrange. "Chelsea Bridge," from Ben Webster’s Music for Loving (CD, Verve 527774), is my all-time favorite saxophone track, and among the most prized recordings in my collection. Webster, a grand master of subtlety, extracted passion from his instrument such as would make Venus herself blush. Everything that makes "Chelsea Bridge" a classic, from Webster’s soft breath passing over the reed to the sound of the padded valves closing and the rich warmth of the notes, was just so pleasurable when reproduced by the Tonic G5. The speaker delivered the kind of performance that makes me close my eyes, bow my head, and slowly nod because the sound is just so right, so meaningful, so involving.

The amount of low bass the G5 can produce is limited by the laws of physics, but that didn’t mean that this diminutive speaker was a lightweight -- it was rare that I found myself wishing for just a little more oomph. The double-bass performances by the duo of Ray Brown and Christian McBride in "Papa Was a Rolling Stone," from Superbass Vol.2 (SACD/CD, Telarc 83483), were well rounded and detailed, with plenty of kick; only the lowest notes sounded a little constrained. Speakers that try too hard to produce low bass through tweaks of the crossover can sound boomy with recordings such as this, but the Tonic G5 never did. It seemed as well tuned as a factory-fresh Ferrari engine. From the midbass up, the Barenaked Ladies’ "New Kid on the Block," from Gordon (CD, Reprise 1100599), had impact, punch, and no discernible holes to make me feel that something was lacking.

The Tonic G5 did have an Achilles’ heel, of sorts: it couldn’t make a bad recording sound good. This was evident with Bachman-Turner Overdrive’s mediocrely recorded "Taking Care of Business" on Legends of Rock (CD, Universal 5320021), which sounded compressed fore and aft, with the bass guitar and drums largely missing in action. Granted, this is likely not the best version of this song, but still, the Tonic G5 was honest enough to state that fact loud and clear. 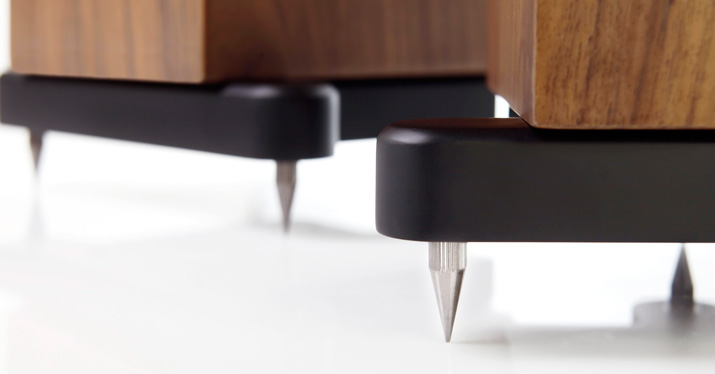 I compared the Gemme Tonic G5s with my reference speakers, the Definitive Technology Mythos STs ($4000/pair), which, as mentioned above, are much bigger than the G5s, go much deeper, and, as not mentioned, cost about 2.5 times as much. It would be unreasonable to compare the G5’s bass with what the Mythos ST’s powered subwoofer can produce, so here I’ve restricted myself to comparing the two models’ midbass, midrange, and treble performances.

With its two 5.25" midrange drivers, the Mythos ST has twice the G5’s radiating surface, but that didn’t prove much of an advantage. Both speakers offered midrange performance that made me wonder how much better things could get, but the little bit of warmth that the G5 added to the sound gave it the slightest edge over my Def Techs. With their mid-tweeter-mid arrays sitting much higher off the floor than the G5s’ two-driver arrays, the Mythos speakers portrayed an even wider soundfield than did the little Gemmes, but they couldn’t "disappear" as completely.

I give the edge in tweeter performance to the Tonic G5 -- it sounded a little more natural than the Mythos ST’s aluminum dome, it threw sounds around the room with a skill that was almost spooky, and its sweet sound grabbed my attention over a wider axis than the Def Tech could muster.

The Gemme Audio Tonic G5 is an outstanding speaker. It is the most exciting audio product I’ve crossed paths with this year, and it’s the biggest bargain, too. In fact, it’s probably all the speaker that most people with smaller rooms will ever need or want. Mated to a subwoofer worthy of it for the lowest octaves, the G5 would do well almost anywhere. Gemme Audio might be less than a decade old, but if they continue to knock them out of the park as they have the Tonic G5, they’ll be around for a very long time indeed.