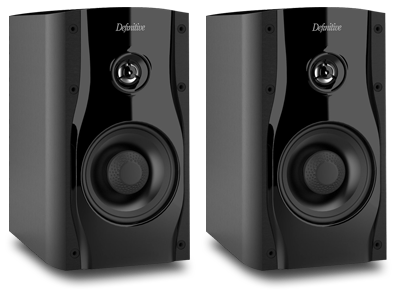 It’s been a long time since I’ve reviewed a true budget loudspeaker. I recently reviewed PSB’s exceptional Imagine Mini, but it cost $699 USD per pair, which puts that minimonitor outside what I consider to be the budget price range. I also reviewed the NHT SuperZero 2.0, which costs a scant $99 each, but requires a subwoofer to provide enough bass to sound satisfying with most music. Although the NHT sat/sub system of SuperZero 2.0 and Super 8 that I reviewed still represents excellent value at a total cost of $547, it’s significantly more than a $198 pair of SuperZero 2.0s.

Definitive Technology’s StudioMonitor 45, the bookshelf model that’s the subject of this review, is priced at only $199 each. While there are high-quality speakers from other respected manufactures that cost less, $398/pair still puts the StudioMonitor 45 squarely in the territory of budget-priced, high-performance speakers. I’ve reviewed Definitive`s excellent Mythos STS and BP-8080ST, and loved the sound of those floorstanding models. Even though, at $2998 per pair, they cost many times the price of the StudioMonitor 45, I still think they provided outstanding value for the quality of sound provided. All of which made me curious to discover what Definitive Technology could achieve in a true budget bookshelf speaker.

Definitive Technology is one of the few speaker makers to design and manufacture their own drive-units. While designing your own drivers is certainly an advantage, it comes with the added costs of the necessary R&D. One way to minimize those costs is to produce a lot of whatever driver designs you decide to put into production, to take advantage of the economies of scale. DefTech accomplishes this by using the same or very similar drivers in most of their speaker models. 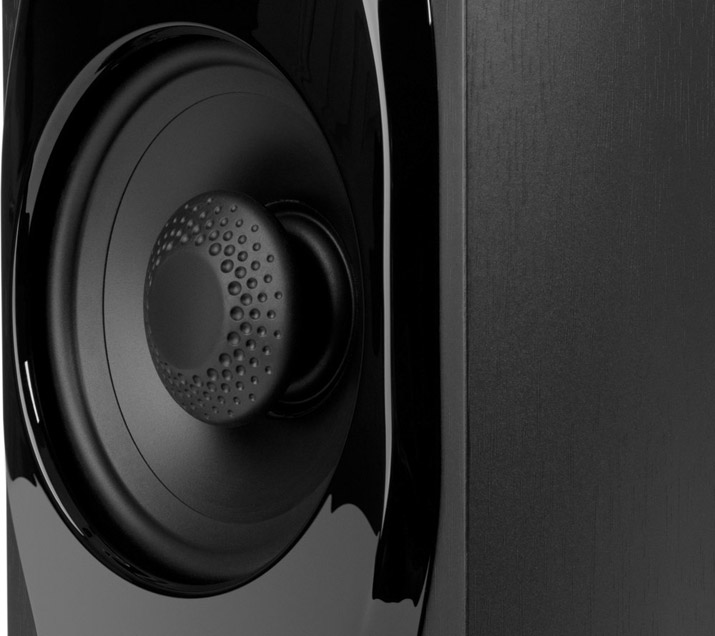 The StudioMonitor 45 might be one of DefTech’s least expensive speakers, but it uses essentially the same drivers as their top-of-the-line Bipolar (BP) models. The 5.25" midrange-woofer, one of the second generation of the company’s Balanced Double Surround System (BDSS) drivers, is supported by surrounds on both its outer and inner edges, to facilitate greater, more linear excursion. Its flared phase plug is designed to disperse higher frequencies, for smoother response both on and off axis. The 1" tweeter has a ceramic-coated aluminum dome that’s treated with heat, which, DefTech says, "relaxes" the crystalline structure. The SM45’s phase-coherent crossover network includes such audiophile-grade components as oversize inductors and Mylar capacitors. And there’s a large flared port on the rear panel, above the single pair of gold-plated, five-way binding posts. 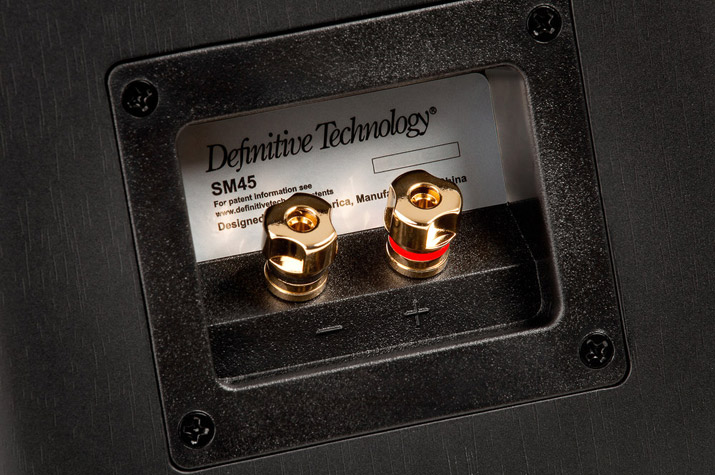 Although the high-gloss front baffle isn’t just for looks -- it’s designed to reduce diffraction from each of the two drivers, which are slightly recessed from its surface -- I think its gentle curve nicely complements the cabinet’s high-quality, matte-black, "wood-grain" vinyl finish. The SM45 is quite deep for a minimonitor, measuring 11.7"H x 6.75"W x 11.7"D. It weighs a rock-solid 12 pounds. Picking up an SM45 and rapping a knuckle on its enclosure, which has internal MDF bracing, gave a sense of how dense and inert the speaker is, especially considering its low price. 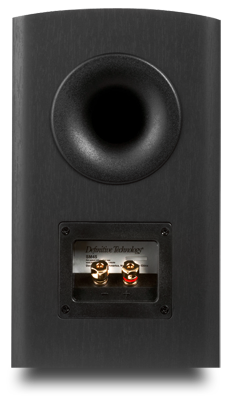 I placed the SM45s on 24"-high stands in the usual positions in my listening room. They looked especially attractive with their grilles off, which revealed their high-tech drivers, and that’s how I listened to them. The grilles are attached with the usual pressure-fit pins, not the magnets some manufacturers use (and which I prefer). With its attractive finish, high-gloss baffle, and substantial build quality, the SM45s didn’t look out of place among the far more expensive components in my system.

I’ve been listening to some very good bookshelf speakers lately, each with its own particular strengths. But while some of them surpassed the Definitive Technology StudioMonitor 45 in some aspect of performance, none could match the DefTechs in overall sound at a reasonable price. Listening to Cyndi Lauper’s The Body Acoustic (16/44.1 FLAC, Sony), I was captivated by the steely twang of the acoustic guitar and the steady center image of Lauper’s raspy voice. Things got even better when she was joined by Sarah McLachlan’s smooth, expressive singing. While I was impressed by the SM45’s excellent reproduction of voices and strings -- it sounded very clear in the mid and upper frequencies -- I was taken aback at how solid the kick drum in this track sounded. I’d expected a refined sound from this speaker, based on its high-quality drivers, but I wasn’t expecting the quality or quantity of bass the two of them were able to put out. There was a good amount of bottom end that was remarkably extended and tight for such a small speaker. Many small speakers reproduce little in the way of low frequencies, which is often a good thing: having less bass, but of a higher quality, is better than having more bass of low quality. With the SM45, I heard refined upper frequencies with good bass to match.

The expansive soundstages on Lady Gaga’s The Fame Monster: Deluxe Edition (16/44.1 FLAC, Streamline/Interscope) remained crisp and coherent at high volumes. Techno effects emanated precisely from within the three-dimensional space created by the SM45s, while Gaga’s voice remained solidly anchored directly between them. The drums in "Starstruck" went deep and were extremely taut, with a room-filling quality I don’t normally expect from a minimonitor. And did I mention that the RM45 could play loud? Even with the Nuforce DDA-100 integrated amplifier, which outputs only 50Wpc into 8 ohms, I could crank up the DefTechs to satisfyingly loud, party-approved levels in my midsize listening room, which opens up to a dining room and a stairwell.

A recent guilty pleasure has been Foreigner’s Acoustique (16/44.1 FLAC, Ais), which features "unplugged" versions of some of this classic-rock band’s biggest hits. The acoustic guitars were reproduced with crystalline quality, and the searing singing of Kelly Hansen was free of grain. The SM45 did an excellent job of reproducing the exceedingly clean recording of "Jukebox Hero," making it easy to differentiate Hansen’s voice from those of the backing singers and the rhythm and lead guitars. The speakers revealed great soundstage depth in "Cold As Ice," which features sweetly layered harmony vocals, a jazzy percussive beat, and guitar and sax solos that sounded genuine and natural. 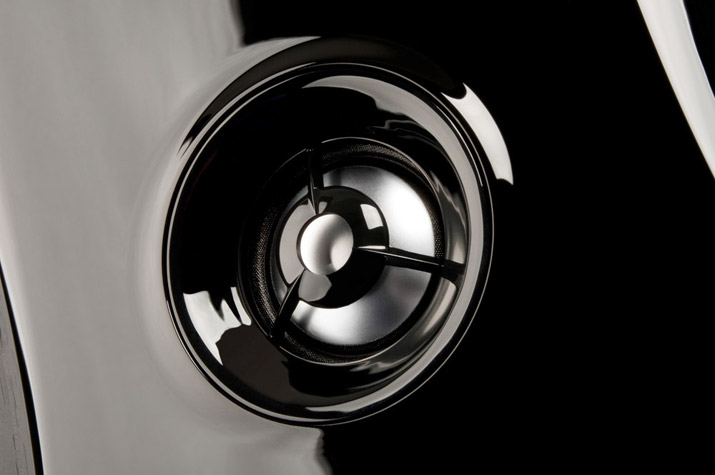 The SM45 sounded even better with high-resolution recordings. Michael Stipe’s piercing voice in "Everybody Hurts," from R.E.M.’s Automatic for the People (24/48 FLAC, Warner Bros./HDtracks), was reproduced smoothly and set slightly back in the soundstage, perfectly framed by the strings. The DefTechs easily transitioned to the more upbeat ebb and flow of the words of "Nightswimming," which were placed slightly more forward. The piano sounded powerful and weighty -- again, not something you’d expect from a small speaker.

The DefTechs beautifully captured the emotional impact of Neil Young’s North Country, a live solo acoustic performance included in Neil Young Archives, Vol.1 (24/96 FLAC, Warner Bros.). The banter between Young and the audience just before "Heart of Gold" sounded realistic, and the ensuing mix of acoustic guitar, harmonica, and Young’s trademark falsetto singing was intense. This recording brims with energy and these speakers convincingly reproduced it. In the more laid-back but equally stirring "The Needle and the Damage Done," the faint wavering of Young’s voice was faithfully conveyed. Not only was the SM45 capable of incredible dynamics, but, when required, it exhibited surprising refinement and delicacy.

I’ve been using NHT’s SuperZero 2.0/Super 8 sat/sub system ($547) as my reference budget speaker system for some time. It’s a nearly full-range system that produces a very large soundstage with pinpoint imaging, and its powered subwoofer has a clean sound. The tiny SuperZero 2.0 minimonitors produce greater soundstage height and more precise image outlines, but the Definitive Technology StudioMonitor 45s countered with greater soundstage depth and better power handling. The NHT system pounded out tons of solid bass with Lady Gaga’s "Poker Face," but at high volumes voices got a little compressed and edgy. The SM45s were able to play louder with less distortion, though they couldn’t quite match the NHTs in the low end.

The DefTechs sounded just a bit smoother and more natural through the mids and highs than the NHTs. Ric Ocasek’s distinctive voice can be a little grating, even in the remastered versions of the Cars’ albums on Japanese SHM-CDs, but while both speakers managed to make him sound more than tolerable, the SM45 made the hand claps sound more lifelike, and the guitar in "My Best Friend’s Girl," from The Cars, had a more realistic timbre (16/44.1 FLAC, Elektra).

The opening bass note of "Russians," from Sting’s Fields of Gold: The Best of Sting 1984-1994 (16/44.1 FLAC, A&M), was deeper and more ominous through the NHTs, but the SM45s were better able to suspend in mid-air the ticking clock and multiple speaking voices. The DefTechs were also better able to unravel the complex orchestral passages, and made Sting’s voice clearer and more immediate, although the NHTs’ superior bass response gave the timpani more weight and presence. The NHT system was more full-range, but the DefTechs had a more neutral and musical sound overall. I like the stylish, gloss-black look of the NHT SuperZero 2.0s and Super 8 sub, and didn’t mind the additional speaker cables required to connect them. However, I’m certain that many people would prefer the convenience of two speakers instead of three, and with the SM45s there wasn’t much of a drop-off in bass, even without a subwoofer.

Considering that the StudioMonitor 45 uses essentially the same drivers as Definitive Technology’s superb-sounding BP-8080ST ($2998/pair), you might be wondering if it sounded like a smaller version of that speaker. While the two models do share a similar tonal quality, the much larger, bipolar BP-8080ST was better able to flesh out the sound in all regards. The soundstage extended farther in all directions, and the imaging was enhanced. While the little SM45s imaged very well, the BP-8080STs produced a more seamless soundstage that extended farther behind and to the sides of the speakers, with comparable image specificity and more inner detail. Bongos and other percussion in "La Isla Bonita," from Madonna’s True Blue (24/96 FLAC, Sire/Warner Bros./HDtracks), were more distinct and had more kick. Obviously, the SM45 couldn’t compete with the bass performance of a speaker that costs more than seven times as much, and has a 12" woofer driven by a 455W amp plus two 12.5" passive radiators, but even music heavily laden with bass suffered little in comparison.

In fact, I was amazed by how well the SM45 fared in comparison to the much larger BP-8080ST. There was still plenty of slam, as evidenced by the solid bass line of "La Isla Bonita," and voices, including those of background singers, remained crisp and clear at high volumes. There was no huge downgrade in sound quality -- just a little bit less of everything the BP-8080ST provided. I was able to fully enjoy "Holiday," from Madonna’s Madonna (24/96 FLAC, Sire/Warner Bros./HDtracks), which sounded open and unrestrained through the SM45s. Listening to the thumping beat of "Lucky Star," I realized that I could happily listen to these little speakers over the long term without a sub. That’s not something I can say about most small, inexpensive bookshelf speakers.

The Definitive Technology StudioMonitor 45 is an excellent combination of performance and value in an entry-level loudspeaker. It offers a clean midrange, and smooth high frequencies that provide a high level of performance and musicality. It also has enough bass and power-handling capability to play loud enough when my listening sessions get a bit rowdy. All of this is packaged in an attractive bookshelf design at the ridiculously low price of $199 each. I’ll be keeping the review samples of the StudioMonitor 45: it’s my new reference budget loudspeaker.