A subwoofer is a necessary part of any home-theater system -- when you’re watching a blockbuster movie, the impact a sub provides is undeniable. But if you were to ask anyone if they really like having a subwoofer in their home, I’d guess that most would say no. Who wants an extra box cluttering up the place? It takes up space, needs another power outlet and another interconnect, and can be difficult to set up. 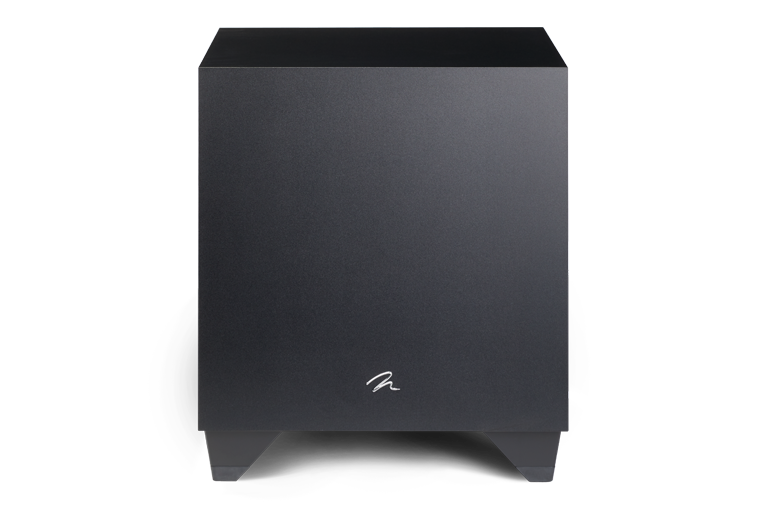 MartinLogan, Ltd., hasn’t yet figured out how to make a subwoofer that’s invisible or even unobtrusively small -- but their new line of Dynamo X models makes clear that they’ve put a lot of thought into making subs a lot easier to use. There are four of these models; they sent me a sample of the smallest, the Dynamo 600X ($599.95 USD).

The Dynamo 600X weighs 35.5 pounds, and is compact at 16.3”H x 14.9”W x 14.5”D. Its downfiring woofer has a long-excursion, 10” cone of polypropylene, powered by a class-D amplifier that produces 120W (240W peak). On the rear panel is a minimal number of controls: a toggle switch with operation settings labeled App (via smartphone) and Local (via the rear-panel controls), a Level knob, a power-mode toggle switch with On (all the time) and Auto (on/off) settings, a USB port for connecting a computer, and a status LED. Although I prefer gloss black for speakers and subs, the Dynamo 600X’s matte-black finish looks pretty classy. 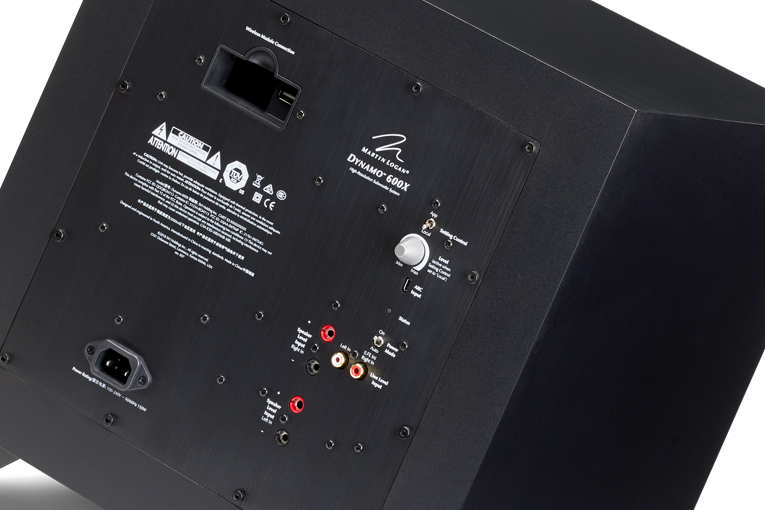 A number of convenience features make the Dynamo 600X easy to set up. Its built-in Bluetooth lets you use your iOS or Android device to measure and optimize the 600X’s sound in your room, using Anthem’s ARC Mobile app. You can also otherwise set up and control the sub using MartinLogan’s Subwoofer Control app. Those who don’t want to run an interconnect to the 600X can order ML’s SWT-X wireless module ($199.95): Plug the SWT-X transmitter into the LFE output of a home-theater processor or AVR, and the SWT-X receiver into the back of the 600X.

If you’re like me, you probably want more rather than less control, and that’s where ML’s Subwoofer Control app comes in. With it you can set the volume level, crossover frequency from 35 to 120Hz, crossover slope (bypass, third order, fourth order), phase from 0 to 180°, and three preset listening modes (Music, Night, Movie). You can also add a 20-30Hz bass boost or cut of ±10dB, turn ARC on or off, and generate a tone sweep. You can use the ARC Mobile app, which plays test tones through the 600X, measures the results with the mike built into your iOS device, then calculates and applies an equalization curve that’s optimal for your room, but you'll still need to adjust the phase and level.

I set up the Dynamo 600X where I usually put subwoofers: in the front left corner of my listening room, which measures 23’L x 16’W x 8’H. Instead of my usual reference speakers, Definitive Technology BP8060ST towers, I used MartinLogan’s Motion 4i minimonitors, so that I could really hear what the Dynamo 600X could do.

To measure the Dynamo 600X’s sound in my room, I used the ARC Mobile app installed on my Apple iPad Air 2. Using the iPad’s mike, the app asked that measurements be taken at five locations: at the main listening position, and four more spots around it. This took only about ten minutes. I then used the ARC software built into my Anthem MRX 720 7.2-channel AVR to blend the outputs of the Dynamo 600X and Motion 4i’s. If you want more control, instead of ARC Mobile you can use a computer running ARC for Windows, and the calibrated ARC mike included with any Anthem HT processor or AVR. This will require long runs of USB link from computer to sub and from computer to mike; the reward is ARC for Windows’s Manual Mode, which lets you set more parameters, such as Room Gain and the frequency bandwidth. Macs running ARC can connect to the 600X via Bluetooth as well. 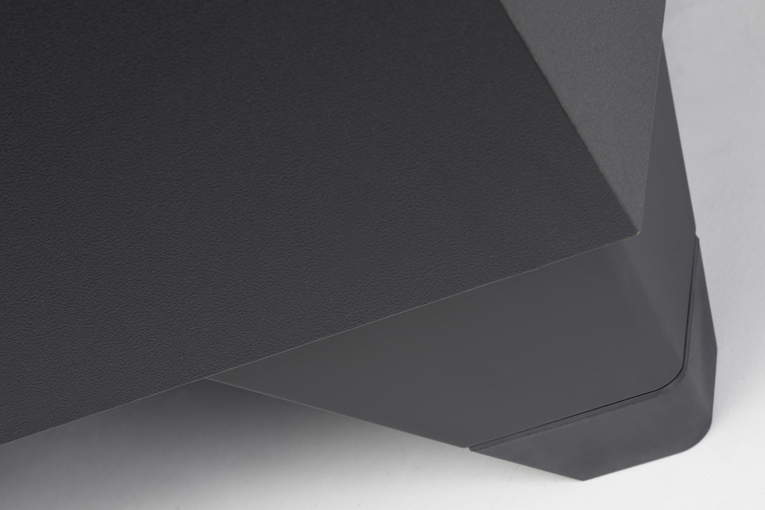 After the Dynamo 600X is set up using ARC or ARC Mobile, there’s little need to use ML’s Subwoofer Control app unless you want to further tweak the settings. However, when I first powered up the 600X, Subwoofer Control automatically updated the sub’s firmware. The Night, Music, and Movie modes were also useful, depending on what I was listening to, and when.

To listen in stereo to the MartinLogan Dynamo 600X with ML’s Motion 4i speakers, I used ARC in my Anthem MRX 720 receiver, and set the room gain to 0dB, for flat response in my room. I was struck by the seamlessness of the blend of the sub’s and speakers’ outputs -- it sounded like a pair of good full-range speakers, but with wider dynamic range. With the Dynamo 600X relieving the AVR and minimonitors of low-frequency duties, I could hear more detail than through the Motion 4i’s alone -- not only in the lows, but throughout the audioband. In addition to the deep-bass notes in “Temple Caves,” from Mickey Hart’s Planet Drum (16-bit/44.1kHz FLAC, Rykodisc) -- which the 600X reproduced very well -- there are drum whacks higher in frequency. These were more impactful than through the Motion 4i’s alone, indicating that the 600X could reproduce the upper as well as the low bass. 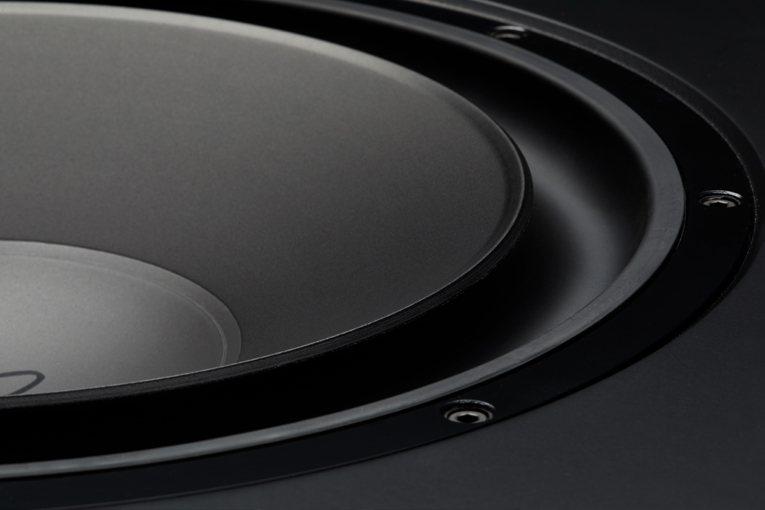 “Within,” from Daft Punk’s Random Access Memories (24/88.2 FLAC, Columbia/HDtracks), provided another good example of this seamless sub-sat blend. Throughout this track runs a very low electric-bass line. The tightness of the bass through the MartinLogan speakers and sub was quite good, though I wasn’t surprised to hear that the Dynamo 600X couldn’t go as low with this track as do bigger, costlier subs. What was remarkable was, again, how well its sound blended with that of the Motion 4i’s -- I was hard-pressed to hear where sub and speakers handed off to each other. This was even more surprising because ARC had set the crossover to the sub rather high, at 110Hz, a frequency where bass notes begin to become directional -- but never did those notes seem to emanate from the 600X’s enclosure.

When I set up all 7.1.4 channels through my Anthem MRX 720, I elevated the room gain to 4.0dB. This changed the target bass curve from flat to having a slight boost between 40 and 50Hz. I prefer this for movie watching, because it gives me the oomph that I like in my room. I watched the BD edition of Jurassic World: Fallen Kingdom, which includes a DTS:X soundtrack. At the beginning is a scene in which a small submarine passes through huge underwater gates. With the Dynamo 600X, the grinding of the gates as they opened shook the walls of my room. In chapter 8, as dinosaurs flee an erupting volcano, the cacophony of low-frequency effects was powerful enough to elicit complaints from my wife on the floor above. These booms were also distinct, and not mere one-note blurs. Many budget subwoofers deliver only a muddy low-frequency rumble instead of clean bass. Not this one. 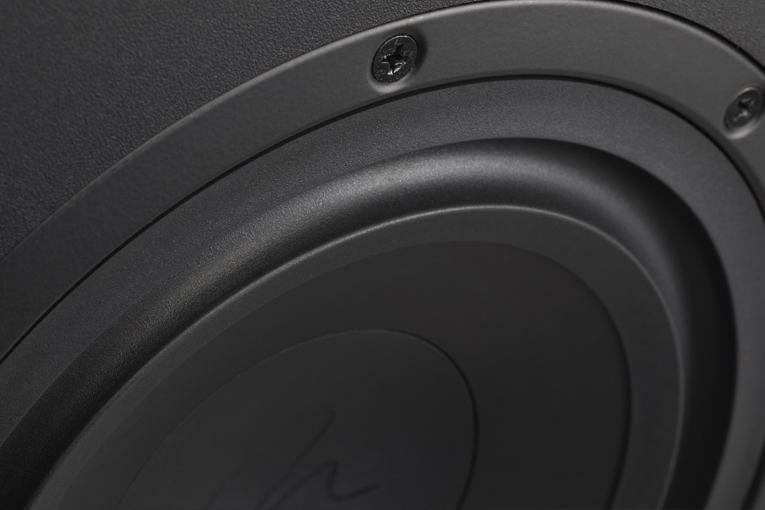 Listening also for maximum bass impact instead of only bass depth, I played the BD of John Wick, whose constant gunfire boasts a Dolby Atmos soundtrack. With the Dynamo 600X I heard those shots as dynamic thuds and short bursts of sound, rather than as loose booms droning on forever. Chapter 3 includes a scene in which Wick is beaten with a pipe. Every impact of pipe on flesh sounded visceral through the Dynamo 600X -- the result was a realistic, if not queasy-making, movie-watching/listening experience.

There’s no way to make a subwoofer that takes up no space in a room, but with the Dynamo 600X MartinLogan has done the next best thing: come up with one that’s easy to set up, easy to live with, sounds great, has multiple connections, and comes with two apps -- ARC Mobile and MartinLogan Subwoofer Control -- that make it easy to dial in and change parameters, all from the comfort of your listening seat. I was especially impressed by how well the Dynamo 600X’s sound blended with that of my minimonitors, while providing excellent bass depth and loudness. If you’re looking for a small subwoofer with great sound and no-fuss setup, I recommend the Dynamo 600X.