Your Listening Seat Matters More than You Might Think

In my February feature, “My System’s Most Important Component -- My Room,” I mentioned how a system’s sound can be altered by the simplest acoustic tweaks, such as throwing a blanket over a high-backed chair used as the primary listening seat. There’s a personal story behind that.

I’ve used the same high-backed leather recliner since 1999, when I bought it to serve as the chair for my first purpose-built listening room. At the time, all I cared about were comfort and price. It didn’t occur to me that aspects of the chair itself -- high- vs. low-backed, soft vs. reflective covering -- might affect the sound.

As I mentioned in that February feature, that first room, and the listening room in my current home, have identical dimensions: 15’L x 12’W. The speakers, placed along one long wall, and the main listening position (MLP), together describe a 9’ equilateral triangle. I toyed with the idea of placing the speakers against a short wall, but I covet soundstage width over depth. I gave the chair little thought in ensuing years, and never felt I had anything to complain about -- until two years ago, when I got serious about in-room measurements and room equalization, aka room correction.

Early on, I realized that placing a measuring microphone near a reflective surface is a bad idea -- it picks up not only the direct soundwaves from the speakers, but also the reflections of those waves bounced off nearby surfaces. But my high-backed leather recliner left me little choice. Leather is far more reflective than the plush fabrics used in, say, towels, or soft blankets that, I found out, are commonly draped over the leather or faux-leather recliners ubiquitous in home theaters, for example. So to take measurements, I threw a thick blanket over my chair’s seatback. 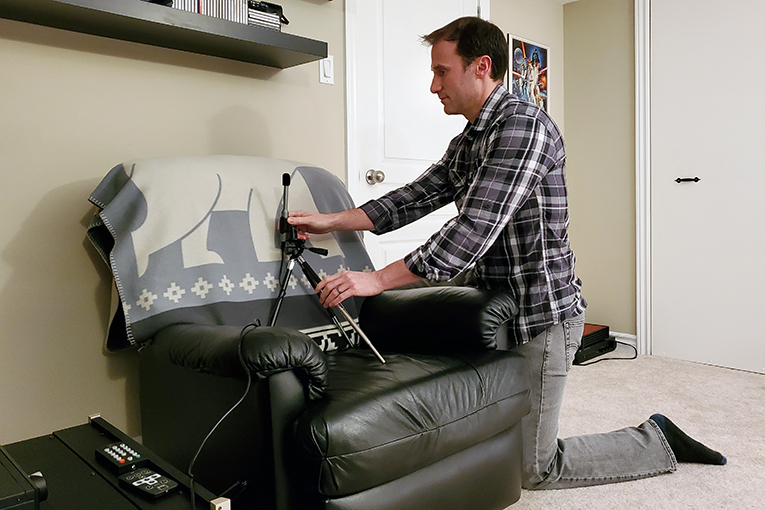 Diego lining up the measurement microphone on the chair, with his preferred blanket on the backrest

Then it occurred to me that maybe I should probably try listening under the same acoustic conditions under which I take measurements. Back and forth, with and without a thick blanket draped over the seatback behind my head, I listened like the obsessed audiophile I am. I tried a thinner blanket. Then I listened with the seatback completely removed, with only painted drywall about 1.5’ behind my ears. Each of these trials sounded different from the others, and the differences consistently fell along a continuum from least bright (thick blanket) to more bright (thin blanket) to most bright (no seatback). In each trial, the frequencies most affected were the upper mids and highs. I settled on a thin, soft blanket.

For this article, I decided to apply a bit of science to better understand this phenomenon, and to see if I could correlate what I was hearing with measurements taken at the MLP.

First, some brief descriptions of what I heard in the three acoustic scenarios:

1) High-backed recliner with seatback removed (back wall, no treatment, 1.5’ from head)

I’ll get to detailed descriptions of the recordings I used for all three scenarios in my descriptions of scenarios 2 and 3. First I want to describe the no-seatback scenario, because it had the greatest effect on the sound. It was, in a word, unlistenable. With nothing but a flat surface directly behind my ears, the sound was intolerably bright -- like setting a Treble control at its maximum position. A warning to anyone planning to place an MLP anywhere near the wall behind it: If a high-backed chair or couch isn’t part of your plan, I strongly recommend installing on the rear wall, at ear height, some sort of diffusion or absorption material, to mitigate the brightness that’s very likely to result. 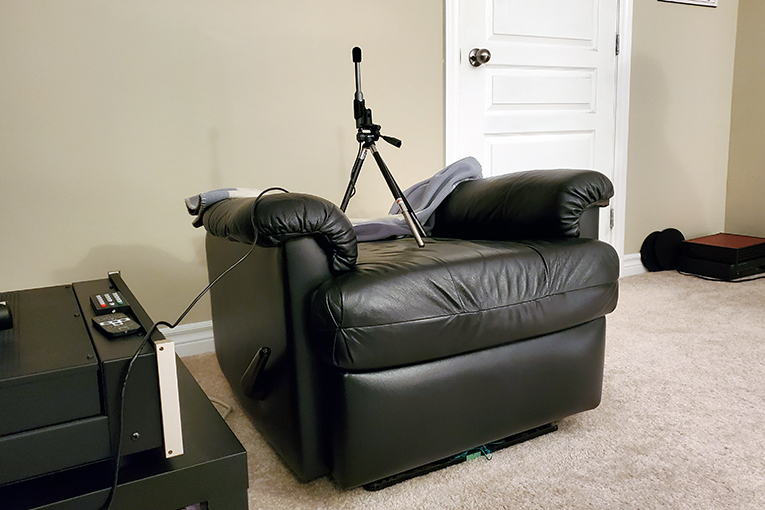 Chair with the backrest removed

The differences between listening with my seat’s leather back with and without a blanket (scenarios 2 and 3) were more subtle, while still illustrating just how much difference in the sound one blanket can make.

I first focused on the high-frequency sounds I’m most sensitive to: sung or spoken sibilants, or ess sounds. At 1:26 in “Turn Me On,” from Norah Jones’s Come Away with Me (16-bit/44.1kHz FLAC, Blue Note), there’s pronounced sibilance as Jones sings the word since. Without the blanket, the beginning and ending ess sounds in this word bordered on irritating, piercing and assaulting my eardrums with too much zing. Draping the seatback with the blanket considerably tamed the sibilance, resulting in a more natural balance of the two ess sounds and, between them, the sound of in. There was still a bit too much sibilance -- it’s part of the recording, and is why I use it to evaluate audio gear -- but it was no longer irritating. I think that even casual, untrained listeners would easily hear the differences I heard, with and without blanket.

I noted something else -- there appeared to be slightly more air around Jones’s voice without the blanket, and at first this was pleasing. But without the blanket, when she leaned in with a hard inflection higher in her range, there was a glary or shouty quality to the sound. With the blanket in place, these effects were mitigated; the sound of Jones’s voice was slightly more smooth, which made my listening more enjoyable. The blanket subtly rounded the hard edges of her upper register in this recording, especially when she leans into the mike. 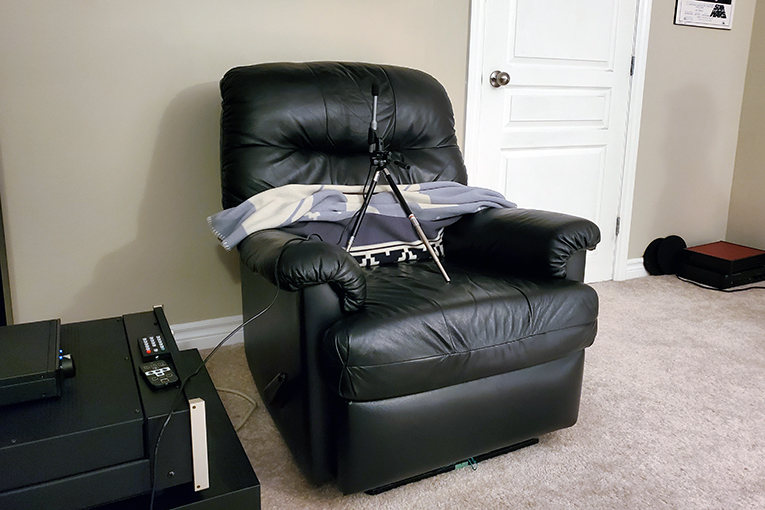 Chair with no blanket draped over the backrest

I then played “Black Velvet,” from Alannah Myles (16/44.1 FLAC, Atlantic), for its cymbal crashes with their particularly long decays. I listened with and without the blanket, focusing mostly on the crash 49 seconds in. I thought that maybe I heard a bit more energy without the blanket, but the difference was very small. I wasn’t entirely sure I was actually hearing a difference at all. I would expect my ear-brain system to be most sensitive to subtle changes in the human voice -- it should come as no surprise that that was where I heard small differences in treble frequency response. Case in point: Although I wasn’t sure I heard differences in the sounds of cymbals, I couldn’t help noticing, in my comparisons of “Black Velvet,” the same difference of more air around a woman’s voice that I’d heard with Norah Jones’s “Turn Me On” without the blanket.

It was time to see if I could measure what I’d just heard.

For my measurements at the MLP, I used Room EQ Wizard (REW) v.5.1 with my calibrated miniDSP UMIK-1 microphone. I placed the mike at a position approximating a point midway between my ears, where it remained for all three measurements. The plot below shows all three measurements of a 10Hz-20kHz sweep with 1/6-octave smoothing. The red plot represents scenario 1 (no leather seatback), the green plot scenario 2 (seatback with blanket), and the blue plot scenario 3 (seatback without blanket). 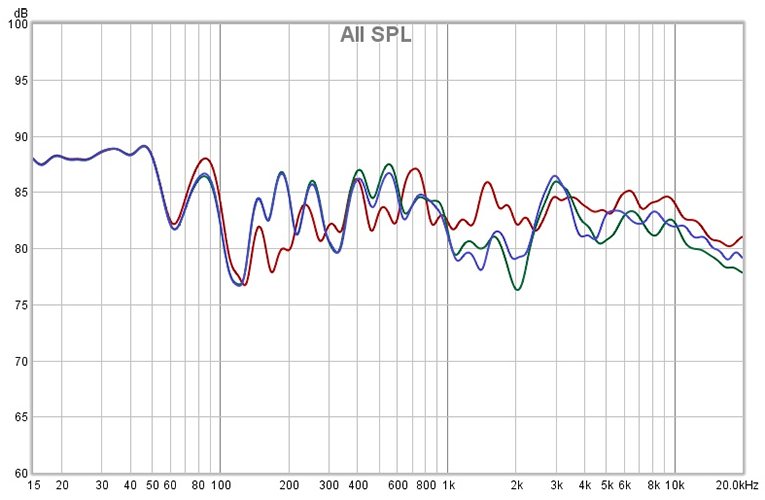 It’s obvious that the red plot (no seatback) exhibits quite a bit more energy from 1 to 20kHz than do the two other plots, which correlates with the overall much brighter sound I heard with all tracks. Not germane to this article but interesting is that removing the seatback also affected the upper bass response between 100 and 300Hz.

Between the green (seatback without blanket) and blue (seatback with blanket) plots the differences are smaller. The range of vocal sibilance, for which differences were most obvious to me with or without a blanket, is between 5 and 8kHz. At 5kHz, my mike measured 3dB more output without the blanket, and about 2dB more at 8kHz. Although the green plot’s output at 7kHz is marginally higher than the blue plot’s, it’s still clear that, between 5 and 8kHz, the mike measured more output on average without the blanket in place. These differences of 2-3dB correlate perfectly with what I heard when I focused on Norah Jones’s sibilants in “Turn Me On.” Without the blanket, there was a bit more sibilance on the most pronounced ess sounds; with the blanket in place and absorbing more soundwaves, those highs were tamed.

As for cymbals in the Alannah Myles track -- I wasn’t sure what range they occupy, but, according to Zytrax.com, their fundamental frequencies are usually between 3 and 5kHz. With the seatback, with or without the blanket, the responses are pretty similar, but there’s a little more energy around 5kHz without the blanket. This energy is of narrow bandwidth, which probably explains why I wasn’t sure if I heard a difference at all. But maybe I did.

If your listening chair has a high seatback, remember that it’s the one object in your room that’s closest to your ears -- why not experiment with its acoustic properties? Try a blanket or whatever other materials you can come up with and hear what happens -- you might be surprised how much it changes the sound, very possibly for the better.