Bass -- How Much Is Enough?

Since the quality and quantity of bass are crucial to a system’s ability to deliver a truly satisfying listening experience, for this month’s column I tried to find the answers to these questions through some listening experiments my wife and I conducted while isolating ourselves at home during the COVID-19 pandemic.

The typical range of human hearing, aka the audioband, runs from a low of 20Hz to a high of 20kHz. Broadly speaking, the range of low frequencies -- the bass -- is from 20 to 300Hz; the middle frequencies, aka the midrange, go from 300Hz to 4kHz; and the high frequencies, or treble, from 4 to 20kHz. The bass, midrange, and treble can each be subdivided into smaller ranges -- e.g., the low bass, midbass, and upper bass -- but for the purposes of this article, that’s all you need to know. Although most musical instruments produce no content below 20Hz, pipe organs notwithstanding, synthesized bass extending below 20Hz can be heard -- or, rather, felt -- in hip-hop, EDM, and, of course, the low-frequency effects (LFE) channels of film soundtracks. Most speakers produce little or no output below 20Hz -- for that, you need a good active subwoofer.

For the purposes of this article, I define bass boost as the measured in-room amplitude -- in short, the volume level -- expressed in decibels (dB), between 30 and 50Hz relative to 1kHz and averaged over several locations around the main listening position and within 2’ of one another. When bass boost is increased, it is around a corner frequency somewhere between 100 and 140Hz. A corner frequency is the midway point between the low-frequency plateau and the high-frequency plateau. This is illustrated in the graph below, which shows a bass boost of 4dB and a corner frequency of 100Hz. You can see that the level in dB at 50Hz is 4dB higher than the level at 1kHz. 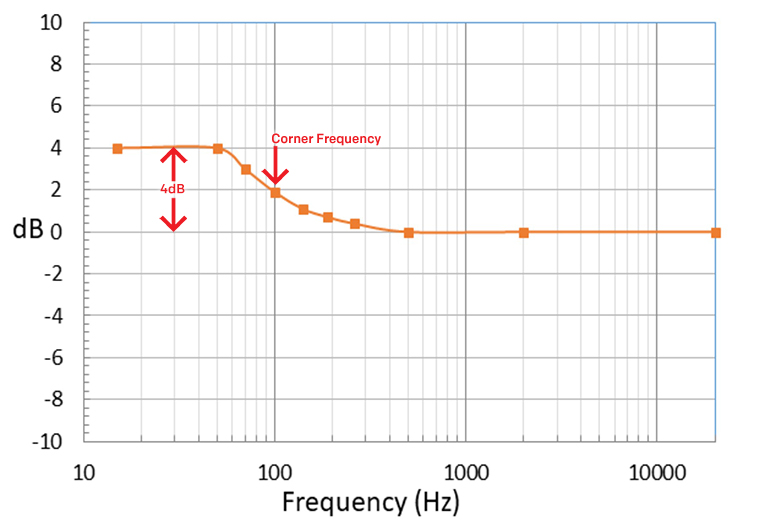 In my years of reading audio forums, I’ve seen a bass boost of 4 to 6dB touted as ideal for music, and a boost of 6 to 8dB as ideal for home-theater systems. I agree with this, generally. Many people seem to want more bass boost for movies than for music because of, well, explosions. Who doesn’t want to feel the extra impact from an onscreen explosion in an action movie?

What does scholarly research tell us? The best article I could find on the subject is “Listener Preferences for In-Room Loudspeaker and Headphone Target Responses,” by Sean Olive et al. (Audio Engineering Society Convention Paper 8994). Olive is a researcher at Harman International. For this article, I investigated only the study’s findings about bass preferences as they pertain to loudspeakers, and therefore won’t discuss the study’s findings about headphones or treble adjustments. 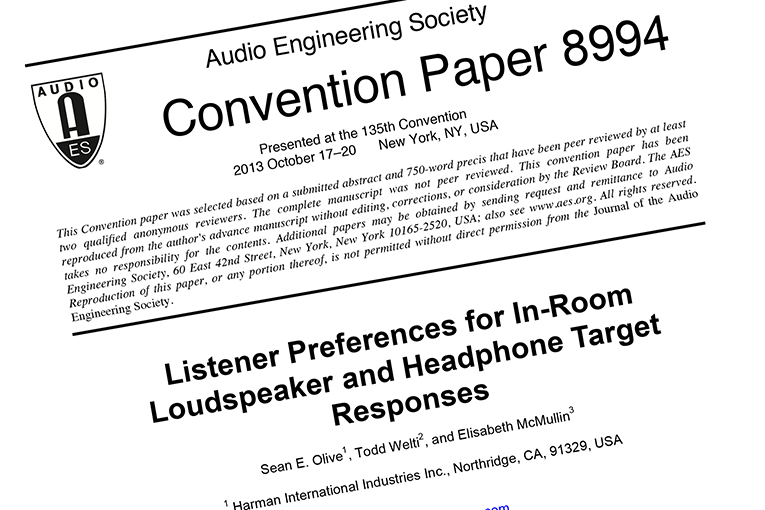 The paper “describes a set of listening experiments” in which “eleven listeners, both trained and untrained, adjusted a flat in-room target response of a stereo loudspeaker system in a reference listening room. Listeners adjusted the bass and treble levels based on preference using three different music programs.” The recordings used included “Female Pop Vocal,” “Male Pop Vocal,” and, most important for the purposes of my own listening tests, “Male/Female Hip Hop.”

I wanted to partially re-create, if with less scientific rigor, some of what Olive and his team had done in Harman International’s reference listening room, to hear if what they found would hold true in my room with my music.

I recruited as an “untrained” listener my wife, Kathleen, an admitted bass-head; I was the “trained” listener. We focused on bass boost only, making no adjustments to the treble, and listened to two tracks. One was hip-hop: “I Told You/Another One,” from Tory Lanez’s I Told You (16-bit/44.1kHz, Interscope/Tidal). This was my wife’s choice -- I’m no fan of the genre, but hip-hop is her favorite and, by far, the most popular type of music listened to today. (I admit to having seen both Drake and Lil’ Wayne in concert; as they say, happy wife, happy life.) The other recording was my choice: “Five Days in May,” from Blue Rodeo’s Five Days in July (16/44.1 FLAC, Warner Bros.). This track contains no synthesized bass, but its bass still goes plenty deep. 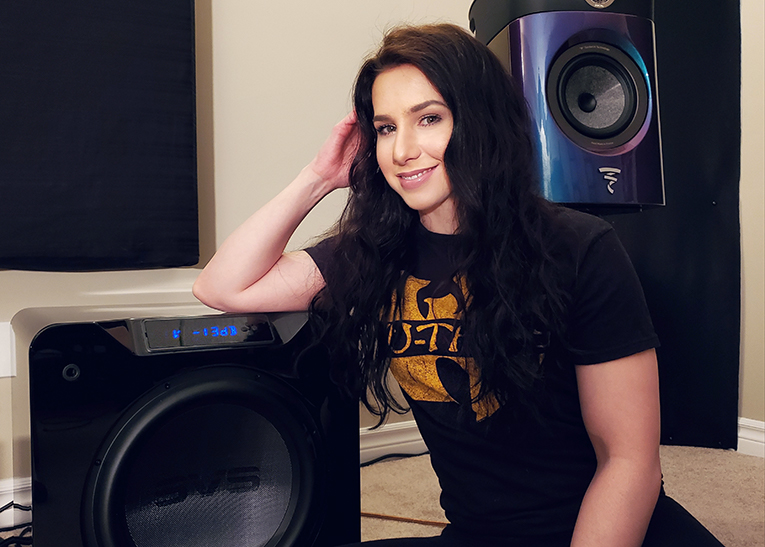 For this test, I used a pair of Focal Sopra No1 loudspeakers, crossed over to two SVS SB-4000 subwoofers at 125Hz. The Sopras extend past 20kHz and the SB-4000s below 20Hz, so I had the entire audioband and then some covered. Also in the system were a McIntosh Laboratory C47 preamplifier-DAC and MC302 power amplifier. Between my source, a Bluesound Node digital streamer, and the McIntosh DAC I used a miniDSP DDRC-22D processor to implement the desired initial target curves via Dirac’s Live 2.0 room-optimization software. Using a calibrated miniDSP UMIK-1 microphone and Dirac Live, I took measurements of the sound-pressure levels (SPLs) of both the left and right channels (mains and subs combined) at nine different mike positions around the main listening seat. (Olive et al. also used nine mike positions.) The averages of those measurements are plotted below, overlaid with the initial target response curve, which is close to what I typically use. 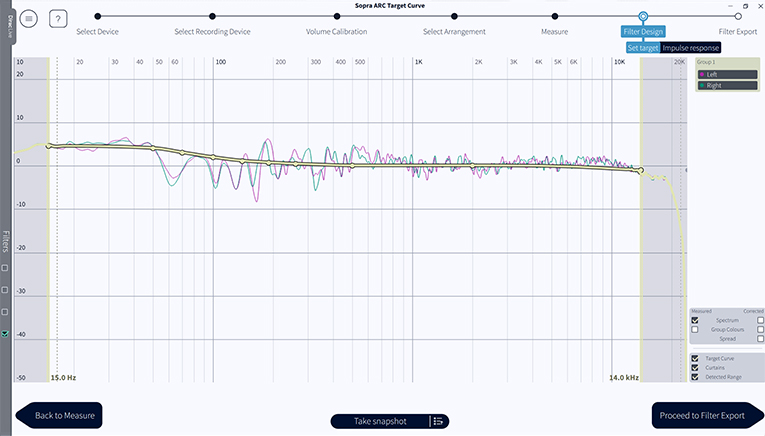 This established the starting point from which I began to make bass adjustments by increasing the volume of both subs, typically by 1dB at a time. The average initial C-weighted listening levels were somewhere in the range of 92-95dB SPL (Olive et al. used 82dB), and higher for the hip-hop track (around 100dB), due to its higher bass content. My wife and I considered these levels satisfyingly loud, but by no means ear-splitting. If those numbers seem high, consider that my room is well treated and well damped -- reflected sound isn’t as big a problem here as it is in most listening rooms. 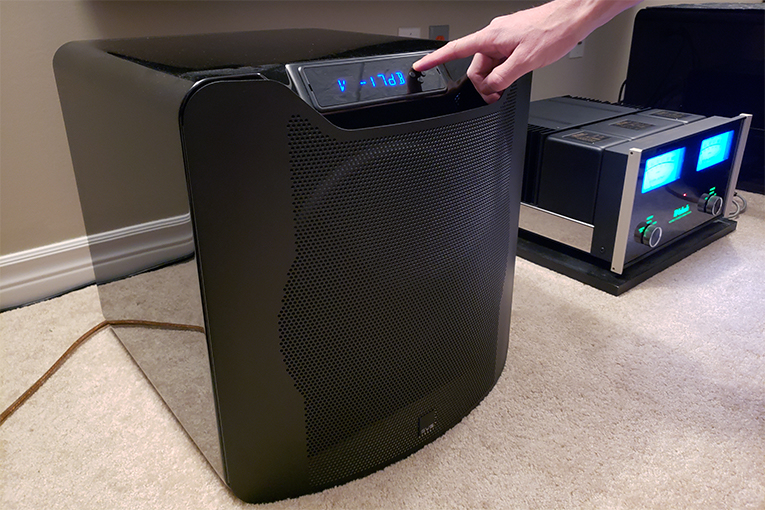 For Blue Rodeo’s “Five Days in May,” my wife settled on 8dB of bass boost as ideal; I settled on 5dB. She explained that 9dB of bass boost was no longer enjoyable because it made the voices less clear. I felt that with 6dB of bass boost, the pace and rhythm seemed to slow in this track, which has inherently quick, taut bass. With 6dB of boost, the longer sustains of bass notes sounded unnatural. I experienced none of that with 5dB of boost, and enjoyed the extra punch in my chest compared to the baseline 4dB setting. Our findings more or less correlate with Harman’s research -- their mean preferred bass boost was 11.2dB among untrained listeners, 4.9dB among trained listeners, and 6.6dB across all listeners.

The hip-hop track yielded very different results. My wife preferred significantly more bass boost with this track, initially settling on 12dB of boost. But we ran into a complication: the music got too loud. She heard potential distortion artifacts at the 13dB setting. The SVS subwoofers’ big 13.5” cones may have been driven into compression. I measured the SPL at the listening position and found peaks of 112dB (C-weighted), and got a warning from the Room EQ Wizard measurement software that I had running on my computer that the mike was about to clip -- I wouldn’t be surprised if we were hitting 120dB. These are very high SPLs -- I don’t recommend that anyone listen at these levels for any length of time. (We listened for only a few minutes.) 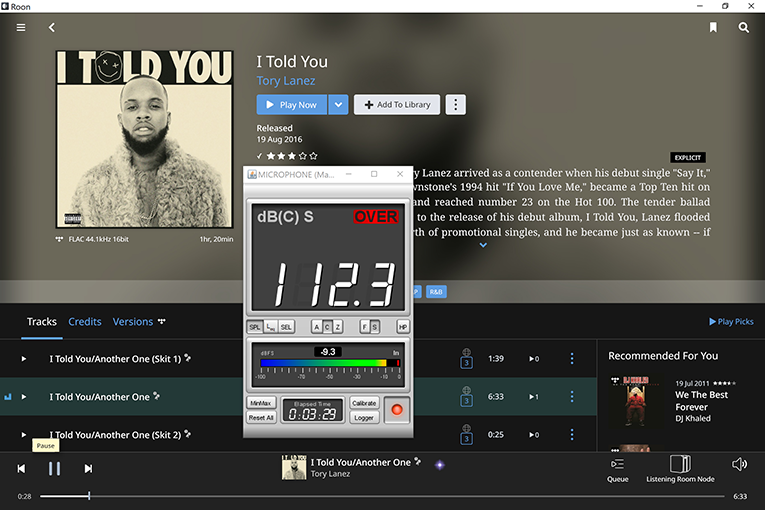 After giving our ears a break, I reduced the overall volume by 10dB and we tried again, beginning with 12dB of bass boost. When I increased the boost to 13dB, my wife was still very satisfied with the sound -- and asked me to move it up to 14dB. But there her enjoyment of the song began to decrease, because the bass began muddying Tory Lanez’s voice. Her final preference for hip-hop was 13dB of bass boost.

I wasn’t surprised -- I well know my wife’s addiction to bass. What did surprise me is that, for this track, I almost agreed with her. Despite not being all that familiar with hip-hop, I’d argue that feeling the bass notes throughout the body as well as with the ears is such an integral part of experiencing hip-hop that more bass is almost always better -- but only up to a point. Sitting in my listening chair, with 12dB of bass boost and peaks exceeding 112dB SPL, I felt my entire body pulse and vibrate, and the pressure in my ears, eyes, and head. For the brief period I let myself listen at that volume, the experience was exhilarating and satisfying. But I reacted to 13dB of bass boost just as my wife had to 14dB of boost: it made voices less clear. 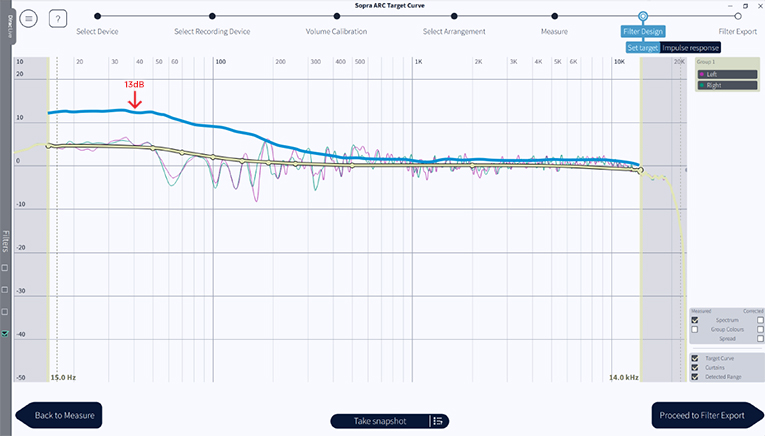 In their paper, Olive et al. said: “Program material didn’t have a significant influence on listeners’ preferred bass and treble settings in this study.” Clearly, their results differ from those my wife and I got, and when I remembered that one of the recordings used in the Harman study was of hip-hop, I raised an eyebrow. I’ve always felt that the rise of hip-hop alongside the rise in sales of bass-heavy headphones (e.g., Beats by Dr. Dre) was no coincidence. Of course, all I have to back that up is my two data points, one hip-hop track, and strong intuition.

Is there a correct or ideal amount of bass boost?

I’ve saved for last the most interesting and revealing data presented by the Harman research paper. While the study showed the mean preferred bass boost to be 6.6dB, which seems like a reasonable number to me, most intriguing were the variations of preferred bass level among the listeners participating in the study. The paper states that “the range of preferred bass levels among individual listeners is 17dB, from -3dB (listener 346) to 14.1dB (listener 400).” This finding astounded me, not only because of the range of difference of 17dB -- a lot -- but that someone out there preferred -3dB of bass cut. I’ve tried listening to music through a two-channel loudspeaker system with a flat in-room response (i.e., no boost or cut), and to me it sounded anemic.

But preferences are like opinions and noses -- everyone’s got one, and no one’s taste in sound can be “wrong,” because the experience of sound is inherently subjective. Is there a correct or ideal or right amount of bass boost?

No. Per Harman’s and my findings, the “right” level of bass boost will come down to each listener’s preference -- as well as, in my opinion, to musical genre, and how bass-heavy the music has been mixed, regardless of genre.

In an e-mail exchange about this article, fellow SoundStage! writer Brent Butterworth told me about something that happened in 2001, when he worked at Dolby Labs. An audio journalist had asked him for some information about setting subwoofer levels, so Brent talked to a Dolby engineer who could recall all of the significant research that had ever been done on the subject, and who then proceeded to describe it all to him. When he was done, Brent asked, “So what should I tell the journalist?” The wise engineer replied, “Just set it by ear.”

But I’d be remiss if I didn’t add some caveats to that wise engineer’s gold nugget of advice: Use published data, conventional wisdom, and measurements to establish and equalize an initial in-room target curve. And then consult the final judge -- your ears.