Moon by Simaudio Has Exited the Echo Chamber

My wife and I have mostly given up on the concept of “appointment television,” with but a few exceptions. We always carve out a regular timeslot in our weekly schedule for exactly three shows: Critical Role, in which “a bunch of nerdy-ass voice actors sit around and play Dungeons & Dragons”; Taskmaster, a UK comedy panel game show that’s best described as an unscripted version of Squid Game with way less murder and way more laughter; and Baumgartner Restoration, a weekly series that documents the work of fine-art conservator Julian Baumgartner. 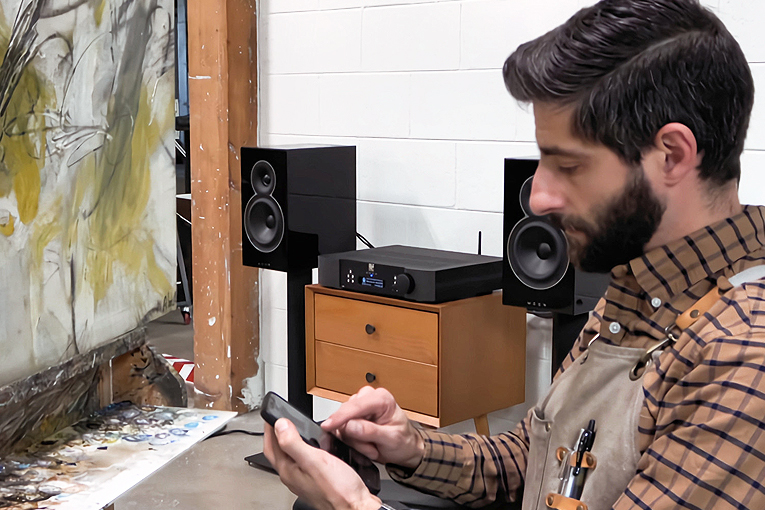 As an independent conservator, Julian gets to spotlight art that might go otherwise unseen by the public at large, since so much of it resides in private collections. And since he produces his own show, he gets to pick his sponsors. Unlike the bulk of advertising, which is just background noise to my brain, the brands he chooses as sponsors actually seem worthy of my attention. I subscribed to Trade Coffee due to his recommendation. Ditto the on-demand documentary streaming service MagellanTV.

But never in a million years would I have expected to see a hi-fi company sponsor the show. Or any mainstream series, for that matter. A few weeks back, though, that’s exactly what happened. My wife and I sat down to watch the episode titled “The Maverick,” in which Baumgartner restored a massive abstract impressionist painting by Mary Abbott, and within seconds I was dumbstruck by the appearance of an organic advertisement for Moon by Simaudio. My reaction prompted my wife to text this to me from the other end of the sofa. 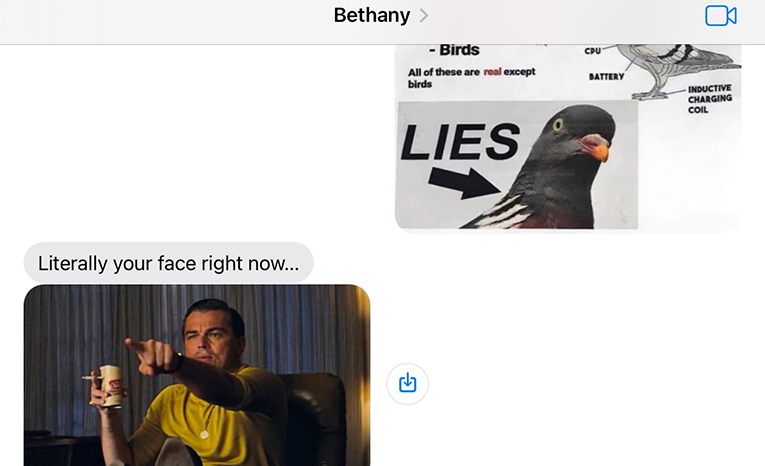 I have to admit: part of me is bothered that this was my reaction. It feels to me like this should be normal. Growing up in the ’70s and ’80s, I was exposed to a barrage of print ads for hi-fi products in all manner of publications, from OMNI when I was younger to GQ and Playboy as I “matured.” In the mid-’90s, it wasn’t completely out of the norm to see a pair of MartinLogan Aerius i electrostats decorating an NYC apartment in the most beloved sitcom of the era (although, as it turns out, those speakers were mere props).

Somewhere between the Friends finale and now, though, product placement of that sort became nigh unimaginable. So much so that the appearance of a pair of Meridian DSP5200 speakers in the background of a recent episode of Reacher sent shockwaves through the audiophile groups I belong to on Facebook. 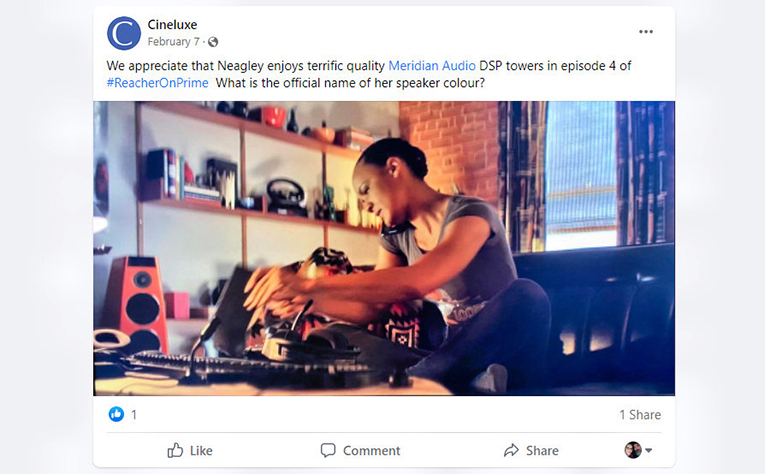 Watching the “Mr. Rogers of art restoration” actively extolling the virtues of a proper stereo system to potentially millions of viewers, though, is an order of magnitude more exciting. Baumgartner’s most popular episodes have accumulated as many as 6.3 million sets of eyeballs. And yes, you could argue that Julian obviously doesn’t quite understand all the jargon he’s repeating in his sponsored ad. And perhaps your first reaction, as was mine, will be to question whether the message was a little too enthusiast-focused for a mainstream audience. But neither of those concerns diminished my excitement about seeing this beloved hobby of mine being promoted in front of a much larger audience than I’ll ever reach.

I wanted to know more. Why did Simaudio choose this particular show to sponsor? Was this a one-off thing or the beginning of a much larger initiative? Who decided to get so geeky in an ad targeted entirely at normies? And the only person I knew who could answer those questions was Étienne Gautier, export sales and marketing manager for Moon by Simaudio.

“You know, we have a lot of partners in our industry,” Étienne told me, “SoundStage! being one. We recently did some videos with Doug, and they were great. Obviously, most of my marketing budget is going toward actions of that sort that I know will pay back immediately.

“But I also want to try new things. I want to try something different from the rest of the industry. One thing we did recently was a partnership with the Bel-Air TV show, which is a new version of The Fresh Prince of Bel-Air, but on a more dramatic wavelength. We had two systems in the show: one in Uncle Phil’s office, a reference system; and one in Carlton’s room, which was an ACE with a pair of Voice 22s. 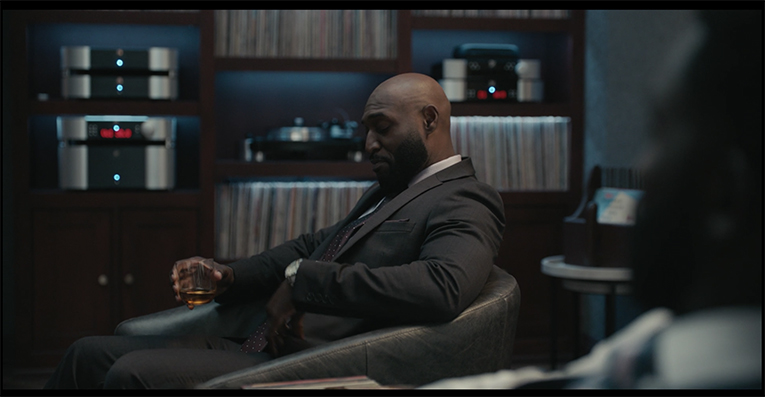 “But I really also wanted to try something radically new, as well. So we stepped back and asked ourselves who we wanted to reach. One target is the 40ish consumer who has a good revenue and could get into hi-fi for the first time, or maybe they’re a little into it and could get into it more. So we asked ourselves what that audience likes. There’s the sort of list you might be able to construct off the top of your head: wine, whisky, watches, cars, and stuff like this.

“But there’s also art, of course. And when that came up in conversation, I immediately thought of Julian’s YouTube channel. What I like about Julian is the fact that his entire job is to take a piece of art and restore it to make sure the viewer can enjoy its beauty. 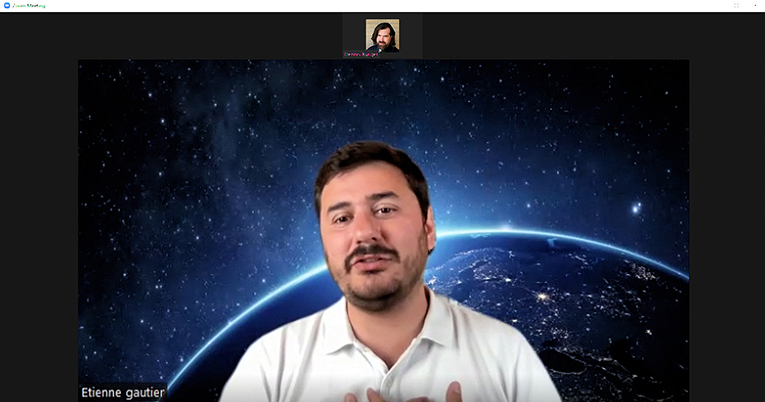 “You know what? That’s not very different from what we do for music. When you listen to music in your car—as most people do—you’re only getting a partial experience of the music. But when you listen on a Moon system, we’re trying to deliver as much of the music as we can to the listener. And Julian does the same. His job is to take what the artist created and make sure you can see it without distraction, with the right presentation, so you can enjoy it in full.”

The process of actually developing the brief sponsorship spot wasn’t as straightforward as you might suspect, Étienne told me. Baumgartner was skeptical at first, unsure of why a brand like Simaudio wanted to form a promotional partnership with him. He wanted to know the story behind the ACE all-in-one player and Voice 22 speakers first. Once he got it, Étienne told me, “He went off and wrote a script about jazz music and abstract art, which was just fantastic. He shot some video, and then we had some back-and-forth discussions. And we finally arrived at the results you saw in that recent episode. We were super happy with the results.” 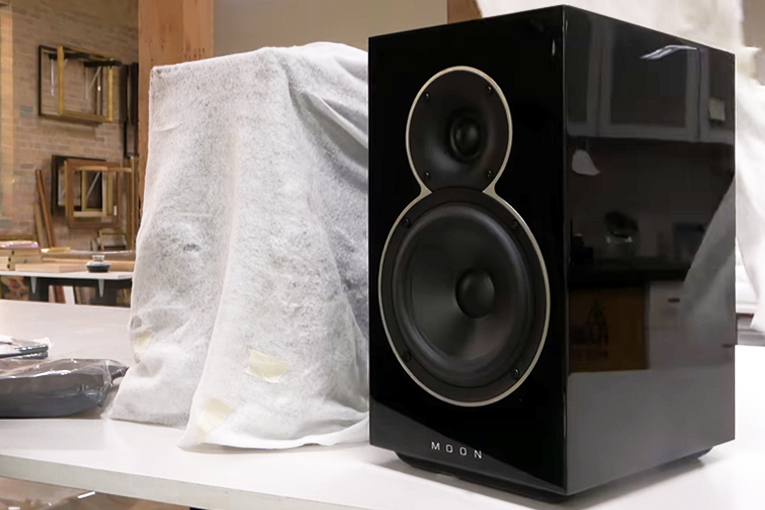 But one thing still struck me as odd. For an ad targeted at a mass audience, there’s an awful lot of discussion about waveguides and drivers and crossovers and other under-the-hood technologies—all the sort of language that editors of mainstream publications make me delete when I’m writing about audio for the mass market. Was there any concern that all of this might be off-putting?

“You know, obviously we had discussions about that,” Étienne said. “But if you watch Baumgartner Restoration, he uses a lot of terminology that someone who hasn’t watched previous episodes might not understand. What is impasto? What’s washi kōzo? He doesn’t always define these terms. But at some point, you absorb it, and you understand it. Because you’re watching a very technical show with someone explaining very technical processes. There’s lots of technicality to his art.

“And, you know, we’re building highly technical products, as well. At some point we needed to talk about the real advantages of our system and show that it’s not just any other hi-fi system. It’s something that’s advanced. So bringing that language into the ad, I think, generates interest from newer consumers to hi-fi who might want to know what makes our brand and our products different. Or maybe it just makes someone curious.”

Is it working? Who honestly knows? I will say this, though: while I intimated in the introduction that I pay attention to the companies that choose to sponsor Baumgartner Restoration, I rarely see much mention of them in the comments section on his YouTube channel. And it’s one of a couple of channels whose comments section is actually worth reading. This one, though, has attracted a few tidbits of feedback—some from people who obviously already knew the Moon brand and some who seemingly didn’t.

When I asked Étienne about this, he said, “The experience we’ve had with Julian is still fresh for us, so we’re still looking at the [key performance indicators] and everything, but I think it’s just a start for us. I think we’re probably going to continue to work with Julian, at different levels, because what I find interesting is the idea that we could upgrade his electronics and he would have a story to tell about that upgrade. And perhaps a different kind of story from the ones we traditionally tell in our industry.

“Usually, everyone talks about performance, the quality of their construction, and technologies, and at the end, I think it’s not just that. I think it’s also the ‘how do you enjoy it?’ You can have the best technology in the world, but if you don’t have fun, you don’t have fun. And we have to have fun. At some point you need to see that in the marketing and communication—that we actually care about what we do and it’s not just building boxes. We’re actually music lovers having fun.”