After the Buying Spree: Living with the Thorens TD 309 Turntable and Hegel HD2 USB DAC

As regards this splendid hobby of ours, the summer of 2011 was significant for me. First I reviewed Thorens’s then-new TD 309 turntable ($1849.95 USD), fell in love with it, and sold my long-serving VPI HW-19 Jr. to make room for my new acquisition. What I heard from the Thorens was a dramatic advance in terms of background quietness, and greater detail extracted from the grooves. Indeed, the TD 309 is one of the very few turntables I’ve heard that can make a convincing argument for why, when everything in the playback chain is working well, vinyl can sound so much better than CD. I also appreciated the included Audio-Technica cartridge which sounded fine, even if the turntable deserves much better, as well as no longer having to switch pulleys to play a 45rpm disc, or deal with the VPI’s obligatory record clamp.

Before VPI’s Harry Weisfeld developed his own reportedly very good tonearms, his dealers tended to offer pre-mounted, good-quality arms appropriate to the model -- in my case, a very well-made AudioQuest PT-5. Looking back now, the AudioQuest spoiled me with its smooth, precise operation and adjustability. Vertical tracking force (VTF) and antiskating were especially easy to set, and with confidence. Setting the VTF was simply a matter of balancing the arm, zeroing the dial, then turning the threaded weight and dial to the desired value. 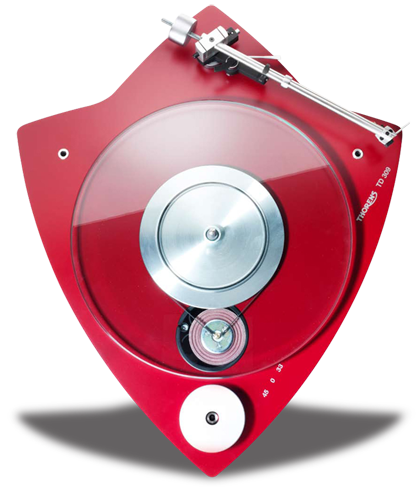 The sound of the Thorens TD 309 continues to impress me, due in no small part to how well its individual parts and subsystems -- motor, platter, suspension, tonearm, etc. -- work together. That said, as well as the TP 92 arm works with this rig, I wish it weren’t quite so minimalist in execution. But having just written that, I realize this may be the arm’s secret of success. Unless you’re a serial cartridge swapper (for which a tonearm with removable headshells might be more suitable), installing a cartridge in the TP 92 is not as easy as it could be. However, neither is it crazy difficult, and once you’re done, you’re done. But it does require subjecting the fragile stylus to numerous outings to a VTF scale, until you get the arm weight positioned correctly. Just take it easy on the coffee before you do this.

Setting the antiskating control is easier, but not very confidence inspiring. The antiskating dial of the AQ arm, when set to the same value as the cartridge’s VTF, got you pretty close to the optimal setting. The TP 92 provides a different experience. Linear hash marks indicate the position of a white-dot indicator, which is moved by turning the antiskating adjustment knob. What the marks are for I haven’t a clue -- they’re neither numbered, nor help in indicating which direction increases or decreases antiskating control. You can’t even get close to the correct setting without a test LP, or a record with a blank band. My Shure V15 V-MR cartridge, which requires a total VTF of about 1.5gm -- admittedly, not much -- needed the arm’s antiskating set to its maximum value. And I could still have used a little more.

In use, the TP 92 feels a bit fragile, to the point where I no longer leave it in the arm rest/locking ring after play, but rather simply push the arm up against it, to leave it resting on the raised tonearm lift. The locking ring is so "grabby" that it seems to exert undue stress on the arm and bearings whenever it’s engaged. In addition, although it’s a feature not obviously derived from a quest for greater simplicity, the headshell design doesn’t permit adjustments of the cartridge’s offset angle, which is fixed at 23.6°.

In terms of optimal cartridge setup, while I got there in the end, the journey wasn’t nearly as easy as with the AQ arm. This doesn’t necessarily make the AQ the better tonearm at what counts -- which, without swapping arms, I couldn’t determine -- but I can’t help wondering what it would cost to bring the TP 92 up to the PT-5’s level of refinement.

It’s been a long time since there was a net increase in the number of black boxes comprising my stereo system, though it hasn’t been for want of trying. Oh, I suppose there was the need (briefly) for an SACD player, quickly followed by a similar need for something to play DVD-Audio discs. But having taken me quite a few expensive go-rounds before I found a reliable silver disc spinner (my Rotel RDD-980 transport) it made me queasy at the thought that I’d have to go through that again for not one, but two machines. I've also been tempted by subwoofers from time to time, but I’m resigned to admit that I really do find my Snell EII loudspeakers to be more than adequate in the bass department. And then computer audio knocked on my door.

Being firmly of the opinion that computer audio may well be the gateway to true ultra-high-resolution sound, I had but one question: When do I jump aboard? In terms of both hardware and software, things are moving fast in this field; and if you throw in the complication of Mac vs. Windows, I wouldn’t expect anyone to be greatly criticized for choosing to sit it out until some signs of stasis appear. I also know that life is too short not to at least dip my little toe into this pool of new technology now. 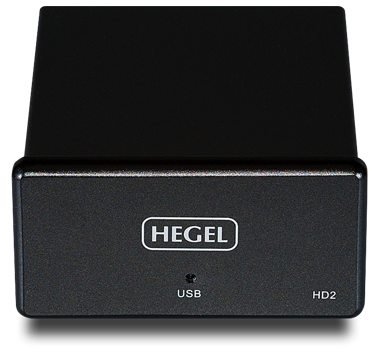 And so, after having performed a cursory cost/benefit analysis, I bit the bullet. The benefits have been multiple: the ability to stream free radio programs from all over the world; the separation of the volume-less information (the souls, if you will) of my hundreds of CDs from their space-demanding corpses, which I can now store anywhere; and, most intriguing, the promise of hearing recordings without having to make any apologies for their sonic limitations. The costs were those of a USB D/A converter, music-player software, cables, and, most important, assured and rapid obsolescence. In fact, the Hegel HD2 USB DAC was obsolete before I even bought the thing (and I knew it).

A list what the Hegel can’t do wouldn’t seem all that impressive. It can’t play files of higher resolution than 24-bit/96kHz. That’s far better than CD, and, in any event, my PC wouldn’t be able to output such files anyway. But the Hegel also won’t play 88.2kHz files. Still, having accidently purchased one such file, I don’t feel completely stuck -- after all, it’s mine to keep. I can save it until I have a system that can decode it, and until that day, my music-player software (JRiver’s Media Center) can resample the data so that the HD2 can play it.

So yes, something that would allow me to play any music files without downsampling, up to and above 24/192, would be the ticket. The problem is that this ticket, for now, is much more expensive than the $350 Hegel, and doesn’t include the cost of a Mac or similar computer equipped with the necessary Class 2 USB ports and drivers, which unfortunately did not show up under last year’s Christmas tree. While I dream of such a setup, I’m having a great time listening to some wonderful Internet Radio (check out AVRO Baroque Around the Clock); my CDs, which sound better off the computer than spun on my Rotel; and, of course, some fabulous 24/96 music, which is becoming ever more available, if not yet ubiquitous.

I can wait for 24/192 (or better). HD audio remains far from even approaching the standard medium for newly released music, and for now seems to be mainly used as a marketing strategy to boost the sales of back catalogs. That’s not a bad thing, but on the other hand, it doesn’t put me in a rush to trash my "Red Book" CD-playing equipment, to say nothing of my turntable. However, I can sleep well, knowing that the future of high-fidelity music reproduction appears to be assured.