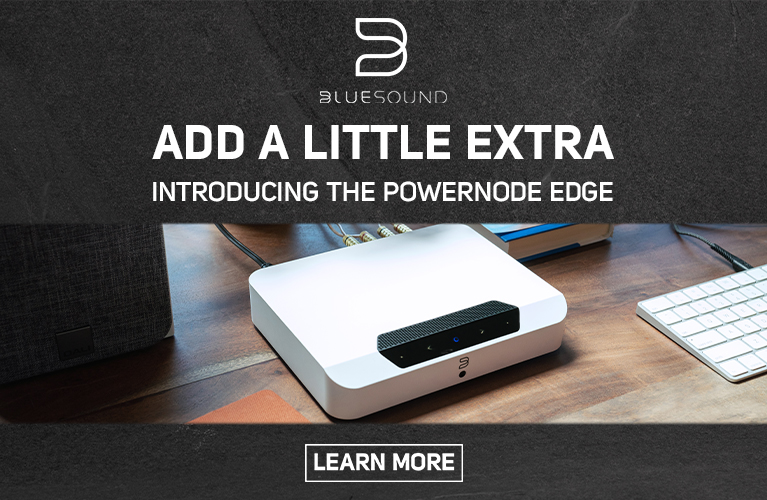 Henry Kloss (1929-2002) was one of the pioneers of North American hi-fi. He studied physics at the Massachusetts Institute of Technology (MIT) before dropping out to embark on a career in which he founded several storied audio brands, including Acoustic Research, Advent Corporation, Cambridge Soundworks, and Tivoli Audio. Along with patent-holder Edgar Villchur, Kloss helped design the first commercially available sealed-box loudspeaker, the Acoustic Research AR-1. Kloss is probably best remembered for KLH Research and Development Corporation, which he cofounded, with Malcolm Low and J. Anton Hofmann, in 1957 in Cambridge, Massachusetts. KLH -- the name was formed from the initial letters of the founders’ last names -- produced several innovative electrostatic loudspeaker designs and electronic components, but by 1967 Kloss had moved on. KLH thereafter changed hands several times, and quickly fell off the hi-fi map.

David Kelley, a longtime Klipsch executive whose final position there was as the brand’s president of global sales, left Klipsch in 2017 and shortly thereafter acquired KLH. The company has since been renamed KLH Audio, and since the brand’s official rollout in 2018, Kelley and his Indiana-based team have rolled out no fewer than 35 SKUs distributed in 22 countries. Drawing on his own extensive experience as well as that of his lieutenants, who’ve worked at such brands as Carver, Paradigm, and Sonance, Kelley has introduced full ranges of loudspeakers and in-wall speakers, headphones and in-ear monitors, a voice-enabled amplified keypad, a digital radio in homage to the original KLH Model Eight, and a flagship electrostatic loudspeaker, the Model Nine. 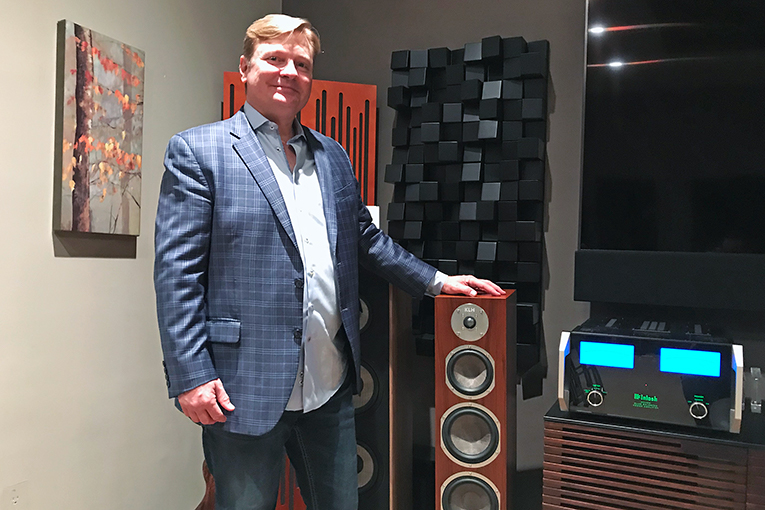 KLH Audio owner and president David Kelley with his pride and joy, the Kendall floorstander

On February 19, 2019, KLH hosted a promotional event for its speaker line at World Wide Stereo, in Montgomeryville, Pennsylvania, not far from my home in South Philadelphia. WWS has teamed up with KLH to distribute the speakers through Amazon. For the evening’s large crowd KLH had set up four listening experiences at WWS, loosely organized like a modern home, including two two-channel systems, a 2.1-channel system, and a surround-sound system.

KLH’s new speakers are named for streets in and around Cambridge, Massachusetts. While the historical nod is certainly appreciated, KLH’s newest creations are pitched more like model homes than loudspeakers. Consider the range-topping Kendall floorstander ($1299.98 USD/pair), which provides the ultimate expression of power and luxury, and will no doubt make you the envy of your cul-de-sac. If you need something more livable, perhaps the smaller Quincy ($999.98/pair) or Cambridge ($799.98/pair) towers will strike your fancy. Want something for a bedroom or living-room nook? The Albany ($478.99/pair) and Ames ($378.99/pair) bookshelf models may be just the ticket. Rounding out the line are three more speaker models: the Beacon surround ($498.99/pair), the Broadway elevation ($498.99/pair), and the Story center ($398.99 each). Four subwoofers are available: the sealed-box Stratton 10 ($648.99) and Stratton 12 ($798.99), and the ported Windsor 10 ($448.99) and Windsor 12 ($598.99). All speaker models are available in real-wood veneers of Black Oak or American Walnut -- except for the Ames (Black Satin, White Satin) and the subs (Black Oak). 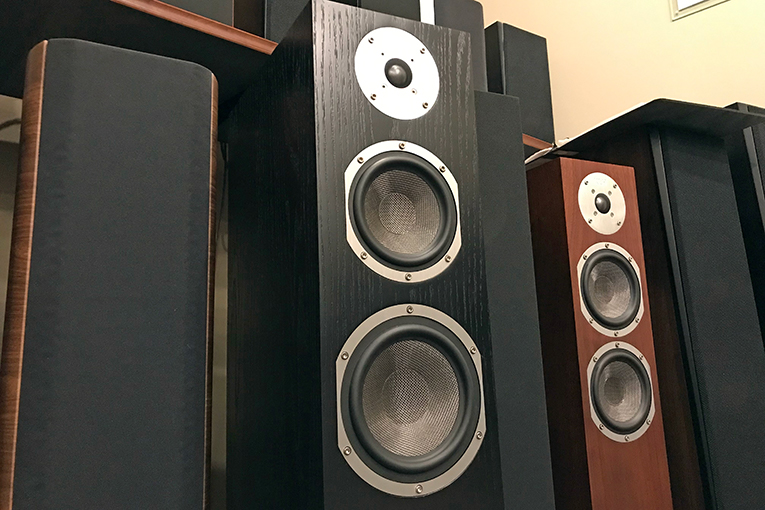 The KLH Quincy in Black Oak (center), and the Cambridge in American Walnut (right)

KLH seems dead serious about making rapid headway in the crowded market of speakers costing under $1500/pair. As Kelley explained during the demo of the flagship Kendall, KLH wants to be aggressive with what consumers might expect in terms of sound quality and fit’n’finish. The demo units were finished in American Walnut and looked fantastic, and their cabinets of 3/4”-thick MDF felt substantial. The same 1” anodized-aluminum dome tweeter is used in all of the non-subwoofer models, and was purpose-built by KLH. The 5.25” midrange driver and two 6.5” woven-Kevlar woofers looked rather upscale, each surrounded by a brushed-aluminum ring that matches the plate surrounding the tweeter. While I would have loved to have seen their driver-mounting screws hidden from view, as so many manufacturers now do, the Kendall towers still looked handsome, and their magnetically attached grilles do hide it all. 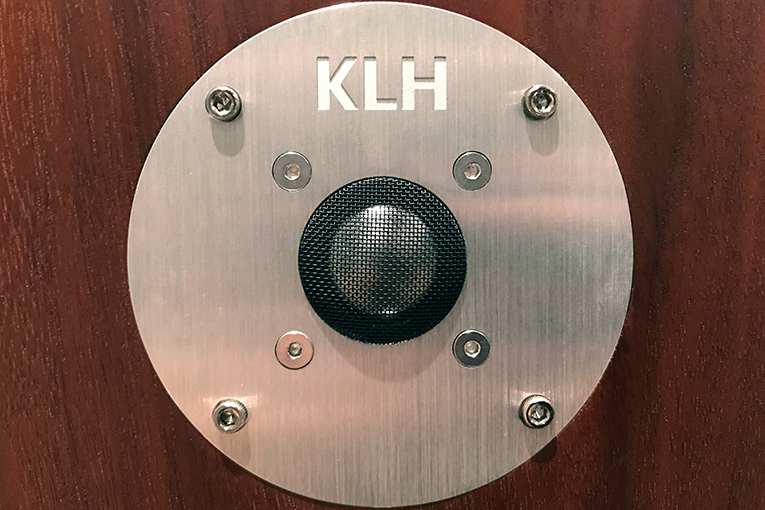 I wasn’t lucky enough to grab the money seat during Kelley’s presentation, but the Kendalls sounded great driven by more than $10,000 worth of McIntosh Laboratory electronics: squeaky clean, plenty of soundstage depth, and dashes of body and warmth. The sound reminded me a lot of Monitor Audio’s Silver 300 speakers ($2000/pair), which I reviewed in early 2018 -- quite promising. Kelley told us that all of KLH’s passive speakers come with a ten-year warranty for parts and labor. Given the industry norm of three to five years, a full decade of coverage is a serious statement, and my eyebrows rose -- only to quickly furrow as Kelley went on to explain that the Kendall is a 96dB-sensitive design with output down to 25Hz, ±3dB. Color me dubious. As impressive as the sound was -- and this bass-reflex design did hit pretty hard in the bass -- I doubt the Kendall will get anywhere near those figures, even measured in-room. 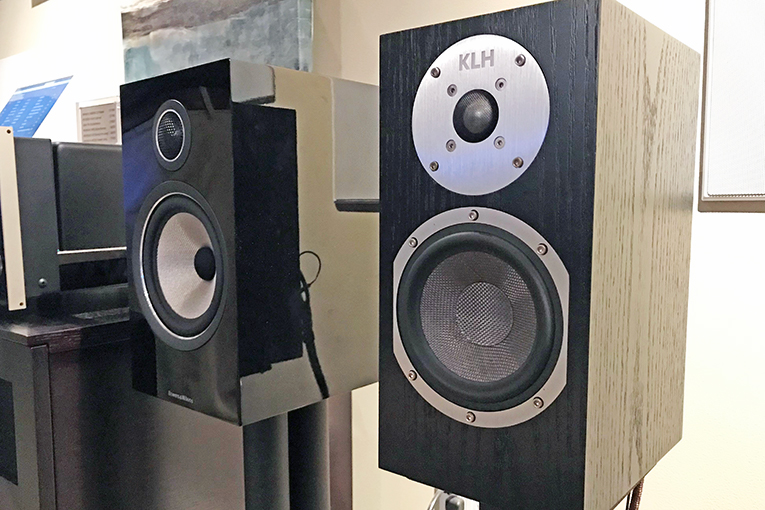 The KLH Albany minimonitor in Black Oak (right), next to a Bowers & Wilkins 706 S2 (left)

I also heard a demo of the three-way Quincy floorstander, which has a smaller cabinet and only one 6.5” woofer. It sounded largely identical to the Kendall. I was more interested in the Albany, the bigger of KLH’s two minimonitors. At 13”H x 6.5”W x 9.5”D, it’s tall, narrow, and, in a somewhat unusual move, a sealed design, with a specified -3dB point of 35Hz and a sensitivity of 92dB. This should mean that the Albany has greater bass extension, thanks to a shallower rolloff, but less upper-bass punch given its absence of a port. It made sense that KLH paired the Albany with one of its subwoofers, crossed over at 80Hz -- it was impossible to hear what the little guy could do down low. Still, its handling of the dynamics of a John Mayer cut recorded live and outdoors was impressive, its tweeter exhibiting plenty of sparkle and spaciousness, while Mayer’s electric guitar had plenty of presence and drive.

I left the KLH event with a pair of Kendalls in my back seat. As ever, the proof will be in the listening, and we’ll be sure to measure the Kendalls in the anechoic chamber of Canada’s National Research Council. Despite my skepticism about some of KLH’s specs for the Kendall and Albany, I was very impressed with the revitalized company’s rollout, and told David Kelley as much before I departed. Their new speakers look and feel fantastic, with an attention to detail and maturity that belie the fact that the company name rose from the ashes only two years ago and is still, effectively, a recent startup. And the overall approach is a strong one: the speakers sound superdynamic, look the part, and are backed by a generous warranty. It’s a propitious start -- I wouldn’t be surprised if we see and hear a lot more from KLH going forward. 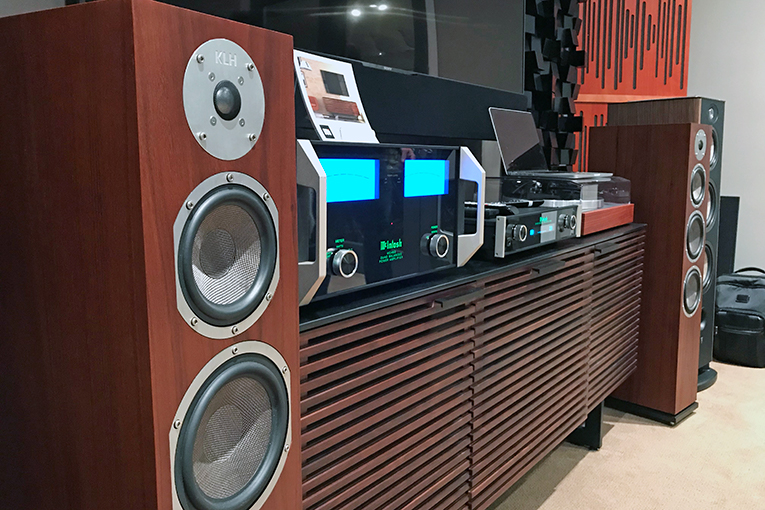 I still have a lot of listening to do, but I can tell you that in my first few hours with the Kendalls installed in my reference system, I’ve heard a great deal in their sound to admire. Meanwhile, check out Brent Butterworth’s review of the KLH Ultimate One headphones on our sister site SoundStage! Solo.