On the Eric Clapton DVD, Planes, Trains, and Eric, an interviewer asks Steve Gadd, the drummer for Clapton’s 2014 tour, what he thinks about the guitarist’s impending retirement at age 70. Gadd points out that, as a freelance musician, retirement is just not an option for him. At least he is a busy freelancer. In addition to touring with Clapton, he is the drummer for James Taylor’s band and maintains a busy schedule as a session player.

In 2013, Gadd and his bandmates in Taylor’s group recorded Gadditude under the drummer’s leadership. That band returns for 70 Strong, a celebration of Gadd’s own 70th birthday. He is joined again by Walt Fowler on trumpet and flugelhorn, Larry Goldings on keys, Jimmy Johnson on bass, and Michael Landau on guitar. They play a brand of easy soul jazz that reveals more depth and feeling with each play of the disc. 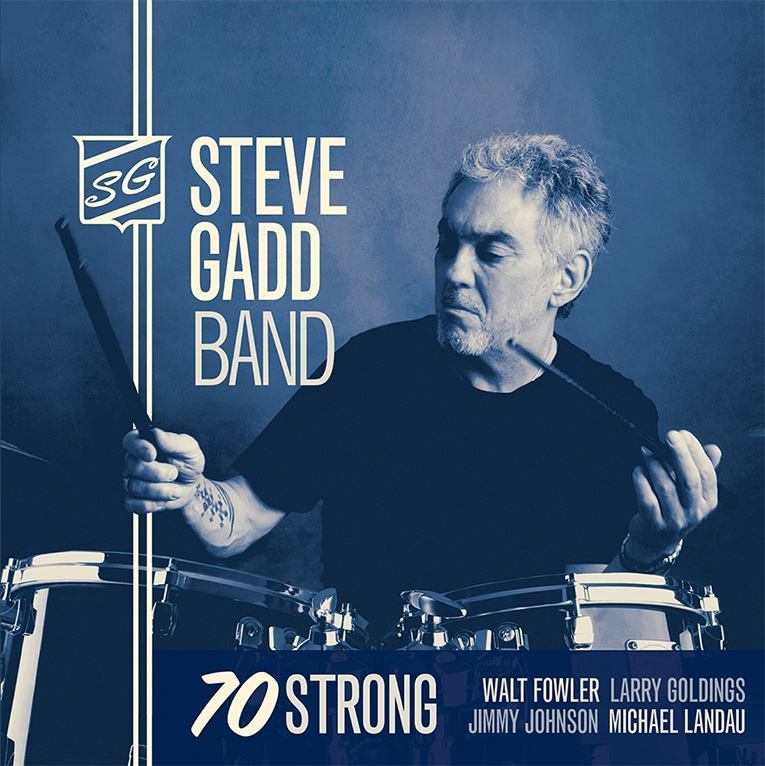 These old pros can breathe life into an overplayed track like Eddie Harris’s “Freedom Jazz Dance,” laying down a vibe reminiscent of Miles Davis’s early ’70s fusion, with Goldings playing a wash of chords on electric piano that creates a slightly ominous atmosphere. Fowler adds a hint of delay to his trumpet and his economical lines show Davis’s influence. Landau’s slide guitar gives the mostly edgy and angular tune a blues undercurrent. Gadd makes the track swing, but he also adds accent and color in much the same way that Paul Motian used to do.

Fowler pays tribute to the recently departed George Duke with “Duke’s Anthem,” a laid-back and heartfelt slice of gospel-influenced jazz that features terrific solos all around. Chico Buarque’s “De Volta Ao Samba” gives the musicians a chance to play bossa nova, with Goldings’s elegant electric piano establishing just the right tone, but each musician steps up to the challenge of the music easily. The Jan Hammer/Fernando Saunders composition “Oh, Yeah?” is another stylistic shift, and what could have been a dated visit to the ’70s sounds funky and new.

The variety of music here is impressive -- not just because the musicians show so much versatility, but because they manage to do so many things while having a recognizable style. And years of experience playing together give them the knowledge to put their songs across. The central instrument in Goldings’s mournful “Written in Stone” is his accordion, but Landau’s guitar lines and, especially, Gadd’s funereal drumming help the track build in emotional impact.

Fowler provided color for the most part on Gadditude, but his solos on 70 Strong are delightfully understated and filled with unexpected twists. It is easy to forget Johnson’s bass until you pay close attention because he keeps himself in the background, but he and Gadd are in a close conversation throughout the disc. In the end, 70 Strong belongs to the leader. Even after all these years of playing, Gadd is tasteful and technically impressive without dominating a song. He drives this very good band to even greater heights than on Gadditude. Well recorded by Dennis Moody, excellently mastered by Greg Calbi, and warmly recommended.